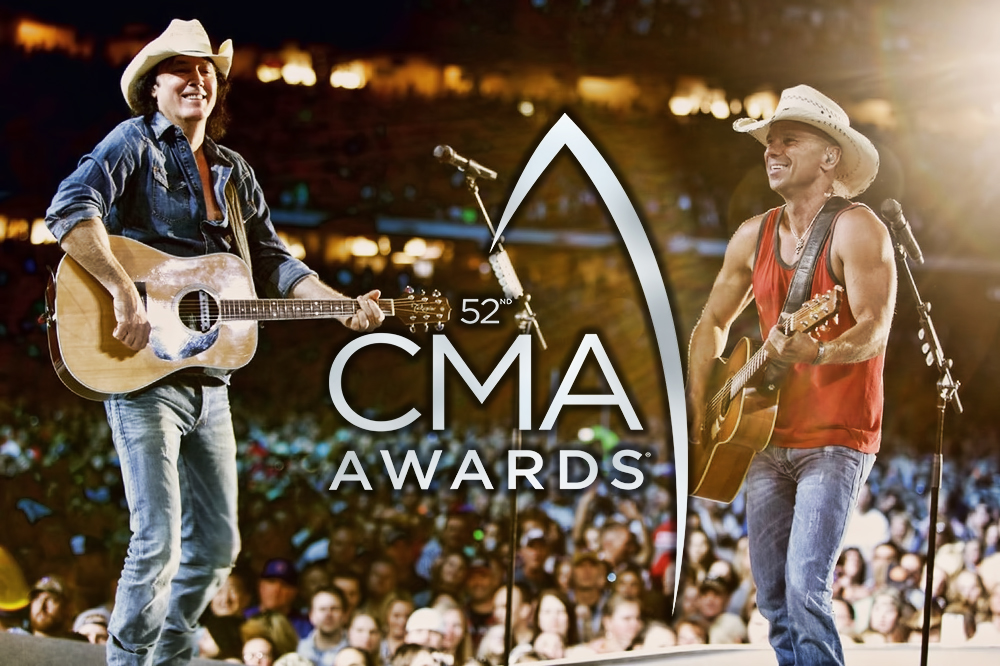 According to a press release:

NASHVILLE, Tenn. – People who know their country music know David Lee Murphy as the Illinois-born and –bred songwriter who defined an era of modern country with the chart-topping “Dust On The Bottle” and 1995’s most-played song, “Party Crowd.” And people who don’t know their country quite that well still know David Lee Murphy—he’s the man who’s written Blake Shelton’s “The More I Drink,” Jason Aldean’s “Big Green Tractor,” Jake Owen’s “Anywhere With You” and Thompson Square’s GRAMMY-nominated “Are You Gonna Kiss Me Or Not,” as well as Chesney’s “Living In Fast Forward,” “Til It’s Gone,” “Just Not Today” and “Pirate Flag.”

Though Chesney is often reticent about awards shows, the four-time CMA Entertainer of the Year recognized how special the moment is for Murphy. Sharing the Musical Event of the Year nod, it only seemed fitting to the man who played 19 stadiums this summer and had his friend come out at them all to share the stage at “The 52nd Annual Country Music Association Awards,” broadcast on ABC this Wednesday, Nov. 14.

“One of the highlights of my year was watching David Lee’s album find an audience and hearing ‘Everything’s Gonna Be Alright’ rolling out of people’s car speakers,” Chesney explains. “And hearing the crowd roar every time he walked out on stage at the stadiums this summer… in a world where true originals are so hard to find, there’s only one David Lee Murphy, so beyond being thrilled for everything that’s happened with this song, I’m even happier to be able to sing it with him at the CMAs.”

Murphy admits, “You know, I’ve always been into writing and singing my songs. I just love it. Recording No Zip Code with Kenny and performing with him this summer was fantastic. Being nominated? ‘Everything’s Gonna Be Alright’ spoke to so many people. It’ll be an honor to sing it on the CMA Awards.”

As Chesney’s 29th Billboard No. 1, “Everything’s Gonna Be Alright” served as a celebration of finding grace – literally – in the storm on his Trip Around the Sun Tour. Each night as footage of both the damage and the rebuilding in the islands rolled behind them, both men shared a song about faith in the darkest times and finding the joy along the way.

“If there’s ever been a song that captures the moment,” says Chesney, “this is it. The world feels so crazy, and it’s easy to get caught up in the news, the opinions, the scary stories. But you can only find your way out when you stay calm, trust yourself to breathe through it and relax into the next right thing. When I heard ‘Everything’s Gonna Be Alright,’ I knew it was special.

“I’m so proud of my friend for writing, singing and co-producing it. I’m happy we’re going to get to sing it together on a night like this.”

We’re HustleTweeting about David Lee Murphy’s upcoming performance with Kenny Chesney at the CMA Awards and you’re more than welcome to join the conversation by following the Hustle on Twitter HERE or by hitting LIKE on our hyper-interactive Facebook page HERE!