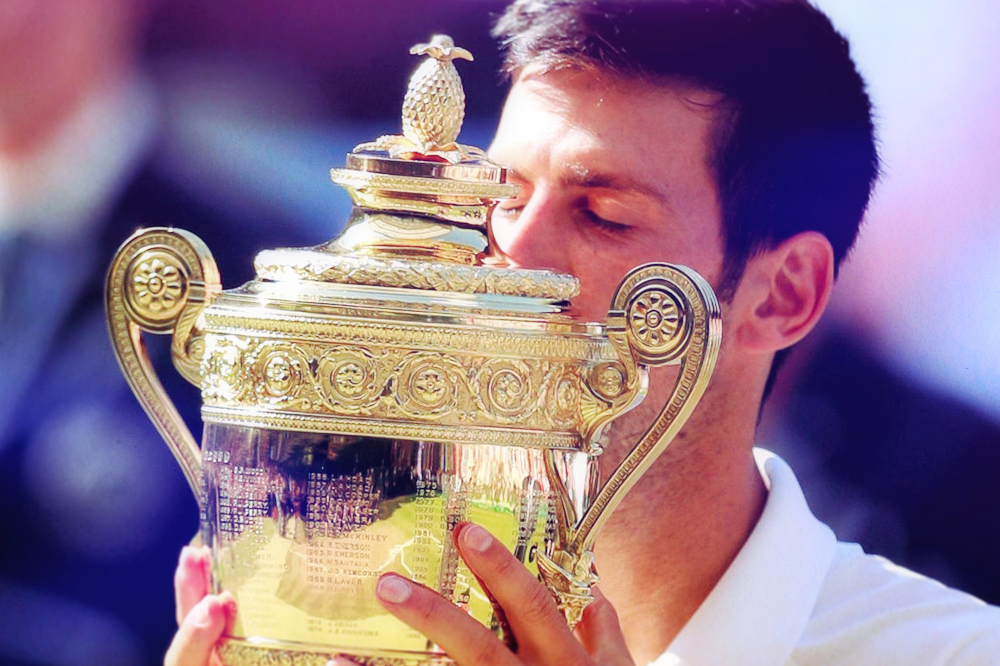 Novak Djokovic‘s long journey back to the top of the tennis world is now complete.

The 12th-seeded Djokovic won his 13th Grand Slam title at the 132nd staging of Wimbledon, making him a 4-time Wimbledon Champion. It is the first major title victory for Djokovic since winning the French Open for the first time in 2016.

Djokovic dominated 8th-seeded Kevin Anderson 6-2, 6-2, 7-6 (3), and then followed his Wimbledon tradition of bending down and eating a few blades of grass from the court after the victory. He claimed he took a “double portion” of grass this time around.

What seemed to mean the most to Djokovic was that his 4-year-old son, Stefan, was allowed to enter the player’s box after the match to see him cradle the trophy.

“It feels amazing that this time I have someone screaming, Daddy, Daddy and it’s the little boy right there,” said Djokovic, who will rise to No. 10 in the rankings Monday. “He’s under 5 years old so he couldn’t watch the match live. But we were hoping that if I won he could come in and watch me hold the trophy. It’s very emotional for me for him to be there.”

In the past two years, there was a right elbow injury that sent him to the operating room and off the court for six months. And there was a constant scrutiny of his personal life that made the Serbian seem a shadow of the champion and No. 1 player, he had been.

“There is no better place to make a comeback,” Djokovic said of winning his latest Grand Slam trophy at Wimbledon. “This is a sacred place in tennis.”

A fatigued Anderson, his arm aching from 21 hours on court and having already played 24 sets of tennis … 14 in the last five days … came alive in the third set. But it was too late to stop Djokovic from his splendid victory.

Into the tiebreaker … a ninth for Anderson at this year’s Wimbledon with a 4-5 outcome … and Djokovic saw the trophy dangling in front of him and pounced. He breezed to a 5-1 lead and closed the match down four points later.

Anderson, vying to be the first South African man to win at Wimbledon, had very little more to give. This was a result of having to give every ounce of energy he possessed to get through the three previous matches.

And as if those two matches weren’t enough of a physical and mental challenge, Anderson took part in a 6-hour, 36-minute marathon before landing his ticket to the final via a 7-6 (6), 6-7 (5), 6-7 (9), 6-4, 26-24 battle of attrition over American John Isner. It was the second-longest match in Grand Slam history, the longest ever played on Centre Court, and one of only three Grand Slam singles matches that spanned longer than six hours.

And so for the second time in Anderson’s career, both occurring in the past year, he’s played in a Grand Slam final without becoming a Grand Slam champion. He lost in the 2017 U.S. Open final to Rafael Nadal.

We’re HustleTweeting about Djokovic Wins Wimbledon, and you’re more than welcome to join the conversation by following the Hustle on Twitter HERE or by hitting LIKE on our hyper-interactive Facebook page HERE!