Dudley Boyz To Be Inducted Into WWE Hall of Fame 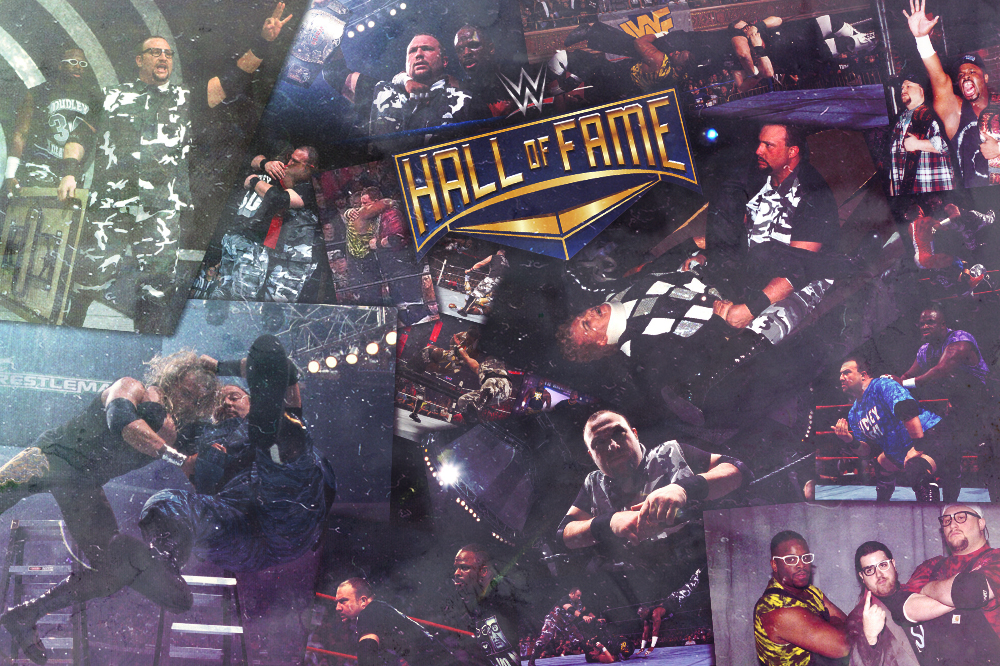 The Dudley Boyz (Bubba Ray and D’Von) will be the first ECW-created act to be inducted into the WWE Hall of Fame, as first reported by CBS Sports.

According to the exclusive report, Bubba Ray and D’Von Dudley will join Goldberg as inductees to the 2018 class of the WWE Hall of Fame at WrestleMania 34 weekend … The ceremony will take place Friday, April 6 at the Smoothie King Center in New Orleans.

The duo, which first joined forces with ECW in 1996 and retired as a team in 2016 following a reunion back in WWE, will enter the Hall of Fame with a multi-faceted legacy built just as much upon longevity and consistency as their reputation for being extreme.

From their camouflage gear and legendary Tables, Ladders & Chairs matches in WWE against The Hardy Boyz and Edge & Christian, to their catchphrases — “Whassup?!” “Testify” and “D’Von, get the tables!” — The Dudley Boyz are among the most iconic duos in the history of sports entertainment.

“The legacy of the Dudley Boyz is really the last of the Mohicans,” Bubba Ray told CBS Sports. “We are the last, legitimate, great tag team that you most likely will ever see; the most old school tag team that there is. I don’t think you will ever see a tag team go on to accomplish what we have accomplished, whether that’s in the WWE or any place else. We really are the last of many, many generations of great tag teams.”

Over a 20-year run, The Dudleyz won titles in every promotion they entered, from ECW, WWE and TNA to All Japan and New Japan Pro-Wrestling. Bubba Ray and D-Von count 24 total titles to their name.

“We were considered a joke at one point,” D’Von said. “Bubba was stuttering and there are like nine other Dudleys coming in from other places. It was like a ‘ha ha’ moment. But when we got together, that ‘ha ha’ moment became real and became serious. That’s when people started taking us serious because of what we were doing in the ring and the commotion and the chaos we were causing.”

Bubba Ray credits ECW founder Paul Heyman with “rolling the dice on an act that was never planned to be successful” when he accepted Bubba’s request to turn him heel and took a chance on pairing him with D’Von.

Soon after, the remaining members of the Dudley faction — including Big Dick Dudley, Sign Guy Dudley, Dances With Dudley, Snot Dudley and Dudley Dudley — slowly faded into the background as the talent of “the brothers from other mothers” began to rise to the surface.

“A lot of those guys came before us and they were important to the initial characters of the Dudley Boyz,” Bubba Ray said. “But there was just something different and special about me and D-Von. We don’t say that out of ego; we say that out of fact. We knew early on that it was us that was getting the job done and making the mark.”

While most of the original faction are remembered as nostalgic footnotes, the Dudley Boyz were quick to acknowledge Spike Dudley — whom D-Von called their “guinea pig” — for his ability to sell their violence.

“He was instrumental in helping us get to where we were because we beat the piss out of Spike for years and years and years,” Bubba Ray said. “You can’t just get over by yourself, you need someone to help you get there. Spike helped get us over by taking all of those beatings in ECW. Then when Spike came up to WWE, he took some more beatings.”

Spike Dudley did the majority of his selling on Bubba Ray and D’Von’s devastating finishing move called 3D: Dudley Death Drop. The flapjack/cutter combo was often best delivered through a table, and Bubba Ray credits the finisher with getting them over.

“The very first thing we knew was that it had to be different and new and unique, and it had to be out of nowhere,” Bubba Ray said. “I’m proud to say it’s probably up there among the greatest finishes of all-time, and that’s what gave us a uniqueness that set us apart from the rest.”

But despite their consistent success from the indies to the brightest stage, it’s difficult to mention Bubba Ray and D’Von and not immediately think of ECW.

Although there have been other ECW alumni to be inducted to the WWE Hall of Fame — from Steve Austin and Mick Foley to Terry Funk — The Dudley Boyz represent the first homegrown talent to get the call. It’s a distinction they couldn’t be more proud to have on their plaque.

“It probably means more to me than anything else,” Bubba Ray said. “Yes, going into the WWE Hall of Fame is cool, but being the first original act ever created in ECW is really a big deal. ECW meant so much to us and it meant so much to wrestling fans. To me, it’s a great honor to represent a company that revolutionized and changed the wrestling business.”

“I don’t think anyone out there can deny that the Attitude Era wasn’t an influence of ECW,” D’Von said.

“There is a reason why people still chant ‘E-C-W,'” Bubba Ray added. “They don’t chant [for] WCW, NWA or AWA, they chant ‘E-C-W’ because it’s a product and a promotion that gave them what they want and did it their way. That’s how me and D-Von did it; we did it our way. I’m not talking about the Frank Sinatra version of ‘My Way,’ I’m talking about the Sex Pistols version of ‘My Way.'”

We’re HustleTweeting about The Dudley Boyz, and you’re more than welcome to join the conversation on the Hustle Twitter HERE and also on our hyper-interactive Facebook page HERE!