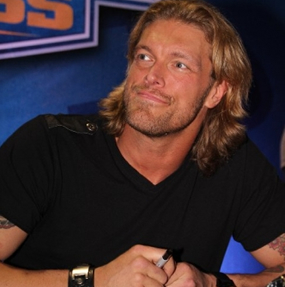 Hustle Photographer Bob Mulrenin: "Little Did I Know I Was Witnessing History Through The Lens of My Camera!"

When Adam "Edge" Copeland appeared tonight before a shocked crowd in Bridgeport, Connecticut, the rumors had already been running rampant that he was going to announce his retirement effective next year after WrestleMania. The current WWE Smackdown World Heavyweight Champion won’t have that year to say goodbye.

Based on the results of physical tests on his neck after WrestleMania, Edge announced tonight his retirement is effective immediately. "You could tell he was in a lot of pain the entire WrestleMania weekend," Hustle photographer Bob Mulrenin noted to us this evening, "but Edge has a performer’s heart, and he didn’t miss a single signing, appearance, or media interview the entire week."

Mulrenin, who provided 360-coverage from Atlanta, was on hand during Edge’s final autograph signing before his WrestleMania match against Alberto Del Rio. "Little did I know I was witnessing history through the lens of my camera," Mulrenin stated, "Edge is doing the smart thing, but it’s a shame his career is being short."

Of course, we’re HustleTweeting about Edge’s shocking retirement, and you’re more than welcome to join the conversation! Follow THE HEYMAN HUSTLE on Twitter HERE or write to us at hustleoncrave@gmail.com