Five Generations of Carter Family Members Join Together on "Across Generations" 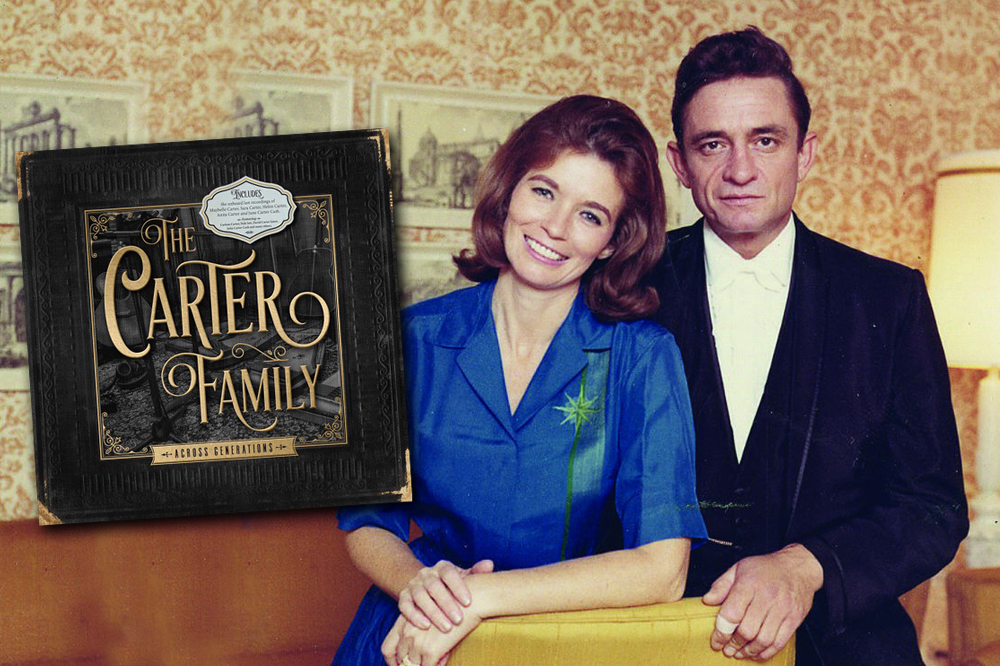 Reviver Entertainment Group’s Legacy Records is releasing an amazing record from the Carter Family that reaches across all generations.

Featuring the first family of country music including the original (now deceased) members, this meticulous record has old tracks of the family singing along with the current generations of Carters.

Produced by John Carter Cash, it is a truly technical and musical achievement.

The generation of the Carter Family credited with the “big bang” that started the genre that would come to be known as country music with four successive generations of Carter kin, including “Carter Girls” Helen, June and Anita as well as Carlene Carter and John Carter Cash are heard on The Carter Family – Across Generations. The album project has been the focus of producer John Carter Cash’s efforts for the past few years and will be released October 18 by Reviver Entertainment Group’s Legacy label on LP, CD and across digital platforms. “Farther On,” a traditional song, also known as “Is Better Farther On,”brought to the fore by Sara and Maybelle Carter at the 1963 Newport Folk Festival, has just been released by Reviver. It includes vocals by Sara Carter, Carlene Carter, Dale Jett (grandson of A.P. and Sara Carter) and Adrianna Cross (great-great-granddaughter of Sara and A.P. Carter).

Carlene Carter noted, “It’s a wonderful blessing to be able to have the technology today to have so many people who have passed and to be able to sing with them. As a child, I was told ‘when we’re all passed away, you have to carry this on and that’s what we’ve done.’” John Carter Cash, her brother adds, “We were charged with this,” suggesting, “It’s not just about fame and power, it’s about the music” with his sister chiming in, “And the love.”

Reflecting on his family’s role in music history, John Carter Cash suggests, “You show me ten songs and I’ll show you nine that have direct influence from The Carter Family. The Carter Family touched many people,” he notes and the album, in a very tangible way, keeps that tradition moving forward.

After hearing the finished album, Carlene commented, “It’s very authentic, it’s just who they are and when I hear it, I get very emotional because all I wanted to do was protect that legacy and you truly hear that ‘Carter thing.’”

Reviver Entertainment Group Founder David Ross noted, “The Carter Family’s contribution and historical relevance to country music cannot be overstated. Without them, the genre would simply not have become the touchstone it has been for almost 100 years.”

The Carter Sisters, also known as the Carter Girls, were the daughters of Sara’s cousin Maybelle who had married Ezra Carter, A.P.’s brother. With their mother, they kept the Carter Family tradition thriving from the 1940s into the 1990s. Anita, June and Helen toured and recorded with Maybelle during those years, ultimately becoming part of The Johnny Cash Show. Cash would marry June in 1968 and had already made the Carter Family an integral part of his in-concert presentation. His inclusion of the Carters enabled many to witness, both in concert and on TV, and to be influenced by “the Carter Scratch,” Mother Maybelle’s innovative guitar technique. Carlene, June’s daughter by country great Carl Smith, was part of the group as was as Lorrie Carter Bennet, Anita’s daughter, who is also heard on the album. Carlene, of course, went on to country stardom in her own right while John Carter Cash, sole offspring of the marriage from Johnny Cash and June Carter, became a noted Nashville-based producer and recording artist.

Now, with Across Generations, things have come full circle with original recordings on which original Carter Family members are heard with contributions from later generations. Members of the fifth generation are heard with their great-great grandparents in a melodic version of time travel. Song selections range from Carter Family standards “Worried Man Blues,” “Will The Circle Be Unbroken”) to “Maybelle”, a composition by Danny and David Carter, written in 1978 upon the passing of their grandmother, to a newly discovered original autoharp recording simply titled “Maybelle’s New Tune.”

Tape sources included a just discovered home recorded tape that was used to convey news and music to family members in lieu of letters, unreleased tracks by June Carter, as well as long-forgotten and never previously released recordings by Helen and Anita.

The “first family of country music” broke through nationally after the legendary Bristol Sessions in the summer of 1927. It was then that A.P., Sara and her cousin Maybelle travelled across the Tennessee line from the their homestead in Hiltons, VA, nestled at the foot of Clinch Mountain, in the heart of Appalachia. In Bristol, they were recorded by pioneering producer Ralph Peer. Years later, he recalled that first encounter with the three Carters. “He’s dressed in overalls… they looked like hillbillies. But as soon as I heard Sara’s voice, that was it. I knew it was going to be wonderful.” During those initial sessions, the still teenaged Maybelle’s ability of playing melody and rhythm on guitar simultaneously, later known as ‘the Carter scratch,’ was noted. The records they recorded at that time and afterwards would go on to sell hundreds of thousands of copies for the Victor Talking Machine Company.

The Carter Family thereafter became a sensation on “border radio,” broadcasting from XERA, an ultra-high wattage station located in Ciudad Acuna, on the Mexican side of the border across from Del Rio, TX. Its powerful signal, across the entirety of the United States, propelled the Carter Family to legendary status. They were the first musical group to be inducted into the Country Music Hall of Fame in 1970.

The Carter tradition made it to Nashville through the good graces of Maybelle and her daughters, regulars on the Grand Ole Opry. The tradition continued with the births of fourth generation Carter Family members including the children of Carlene Carter, John Carter Cash, Dale Jett, David Carter Jones and Danny Carter Jones.

Children of June Carter Cash, Carlene and John Carter perform on the album. In turn, their offspring make appearances, as well as numerous other descendants of A.P., Sara, Ezra, Maybelle and their progeny.

“The Carter Family – Across Generations” will be available October 18 from Reviver Entertainment Group’s Legacy Records. You can pre-order the release HERE.

We’re HustleTweeting about The Carter Family, and you’re more than welcome to join the conversation by following the Hustle on Twitter HERE or by hitting LIKE on our hyper-interactive Facebook page HERE!