Lin-Manuel Miranda Speaks Out on the 2016 Presidential Election 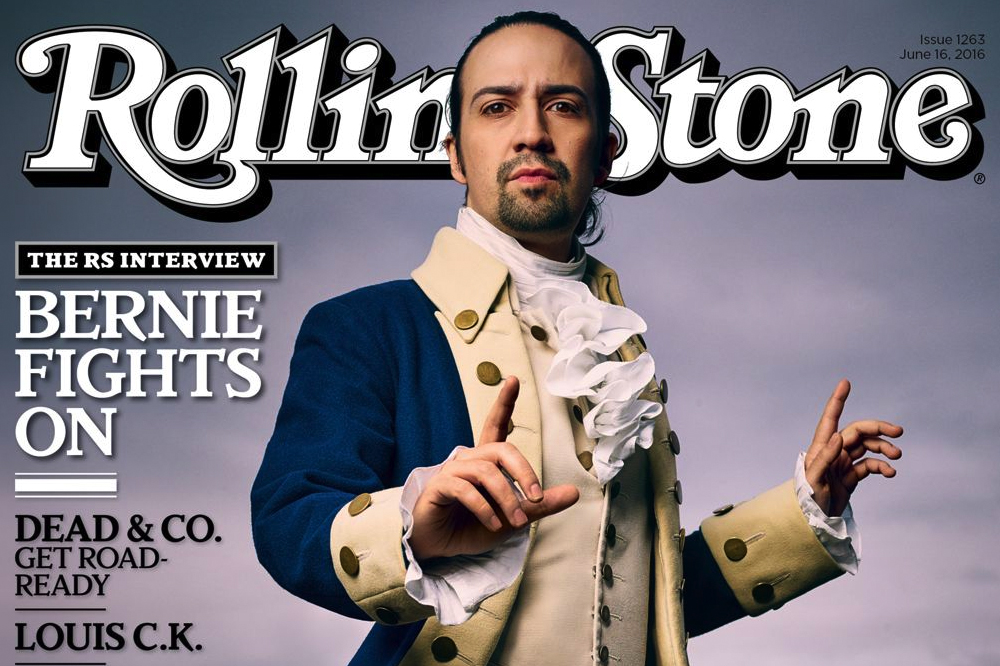 The Superstar of Broadway’s “Hamilton” Does The Rolling Stone Interview!

Lin-Manuel Miranda, perhaps the most celebrated star on Broadway in decades, appears on the cover of the current issue of the magazine Rolling Stone with the headline, “Hamilton Mania!”

In the story, which can read in its entirety HERE, Miranda talks about how most of the show was written during the rise of the Tea Party in American politics, how the more things change in those politics, the more they seem to stay the same.

Here are a few of the highlights:

On the Lost Country-Rock Song for Benjamin Franklin: “It was a very Decemberists-y type song. If we’re starting from the place that Hamilton is hip-hop, Ben Franklin’s a totally different generation. So I wouldn’t want to see Ben Franklin rapping, because that doesn’t make sense to me. I only got halfway through his song.”

On Bringing Broadway and Hip-Hop Together: “Honestly, my secret dream has already happened: I hoped the hip-hop community would embrace the show. Pretty much all of my other dreams had already come true on the last show. With In the Heights, I went from being a substitute teacher to being a writer, from not having a career in this world to having one. I don’t think anything will ever touch that. But the hip-hop world and the Broadway world really didn’t know each other or meet, and for the most part, the hip-hop community missed the show.”

On the Two Trends in the Battle Between the State and the Federal Government: “Hamilton saw debt as a way to unite the states. His thinking was, if we are entrenched in each other’s finances, we’re stuck with each other. Which is cynical! But also an effective way to unite the states. Contrast that with Jefferson, who had a much more agrarian ’we’ll live off our resources’ vision of America in his mind. That side lost.”

On the Contentious 2016 Presidential Election: “Yes, this election cycle is bizarre. But it’s no more bizarre than the election in 1800, wherein Jefferson accused Adams of being a hermaphrodite and Adams responded by [spreading rumors] that Jefferson died, so Adams would be the only viable candidate. He was counting on news to travel slow! That, weirdly, gives me hope.”

On Whether He Plans to Campaign for One Candidate or Another: “I would rather play the back half of a horse in Equus [laughs]. I always get involved in voter drives. But I have no desire for my Twitter feed to be filled with a bunch of people screaming ad hominem attacks against anyone who voiced something different from how they feel. I don’t feel the need to get in the middle of that. Just get out and vote.”

On a Film of Hamilton: “Someday. Probably not for, like, 20 years…. The thing is, we worked really hard to make this work as a piece of theater. And I get it—I get it 50 times a day: ‘Please film it! Please film it so we can watch it!‘ And I understand it’s hard to get to New York and it’s hard to get a Broadway ticket. At the same time, filming is an act of translation. It is not being in the room with us. It’s different. You will get the forest, you will not get the trees.”

Of course, we’re HustleTweeting about Lin-Manuel Miranda, and you’re more than welcome to join the conversation by following THE HEYMAN HUSTLE on Twitter HERE … you can also be part of Facebook’s most interactive experience, the Hustle Facebook page, which is available HERE!