Outside Our Window: Miranda Kerr Heats Up New York City! 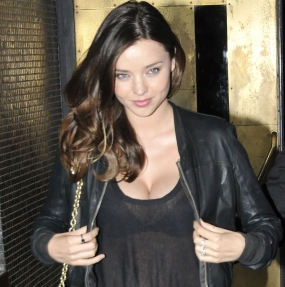 We’d like to officially go on the record right now and say that we hate Orlando Bloom. It has nothing to do with his fine acting skills, but this dude gets to go places no other human being gets to see, let alone touch. Orlando Bloom is Miranda Kerr’s husband. And for that, we officially hate him.

MIRANDA KERR MADE HER FIRST APPEARANCE SINCE DELIVERING A HEALTHY BABY GIRL (to which our Hustler De Tuti Hustlers Paul Heyman says "Mazel Tov!"), and everyone immediately noticed she was back in modeling shape … especially if you’d like hot bikini tops or bras to be photographed. MIRANDA’S SECOND PUBLIC APPEARANCE WAS SO BOOBALICIOUS, she caused a worldwide Internet sensation with people all across the globe trying to look at her magnificent mamasans.

Now, Miranda is in New York City, where she attended a movie premiere, and OMFG! The Awesome Aussie is hotter than ever, which makes our hatred for Orlando Bloom ever-lasting and vehement!

Of course, this means we’re HustleTweeting (rather obsessively, no doubt) about Miranda, and you’re welcome to join the conversation! Follow THE HEYMAN HUSTLE on Twitter HERE or write to us at hustleoncrave@gmail.com

CLICK ON THE PICS BELOW TO SEE THE ENTIRE GALLERY OF
THE AWESOME AUSSIE MIRANDA KERR IN NEW YORK CITY!