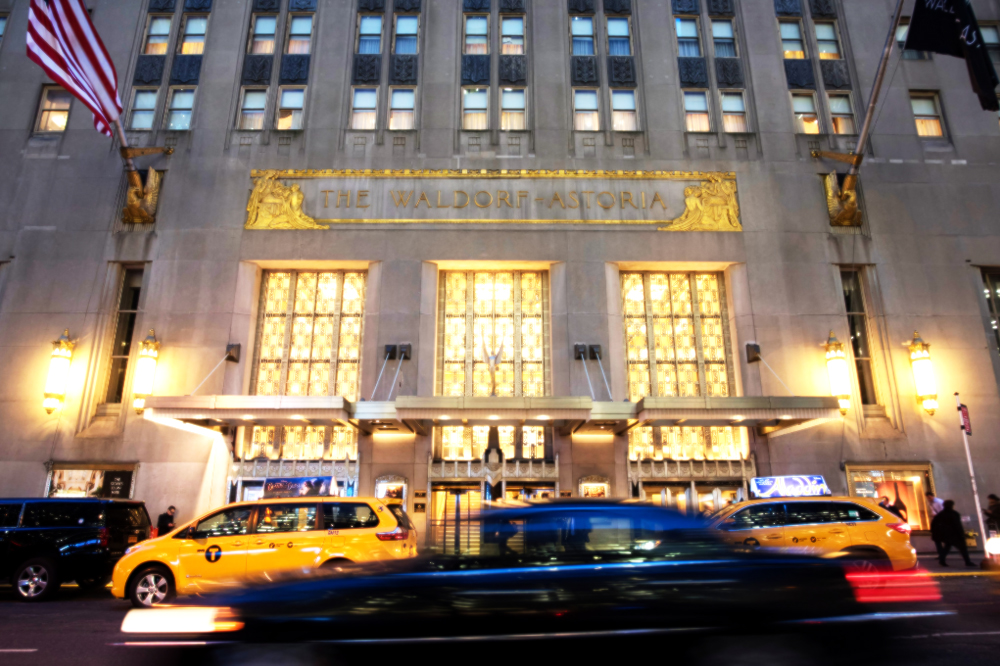 In just two days, the famed Waldorf Astoria will go on hiatus. No more reservations accepted. No more stays in one of the most celebrated hotels in the world. The glorious beacon of luxury on Park Avenue in Midtown Manhattan will shut down in order to go under an extensive renovation, which will include a major overhaul to accommodate luxury condominiums. Progress, it seems, does not wait for anyone.

The Waldorf Astoria will be reconstituted as a smaller hotel with more apartments, aptly named The Waldorf Towers, reached through an entrance separate from the hotel’s, which has already been in place, The towers entrance has been a suites-only address with longtime residents since the Waldorf opened in 1931. The new apartments, or as we have been informed the new condos, have yet to be priced out nor is it known how many there will be.

The plans are not yet final, but a spokesman for the hotel’s owner said the Art Deco public areas would be restored. The Landmarks Preservation Commission is scheduled to decide whether to designate a long list of Waldorfiana as interior landmarks, from the grand ballroom to the “wheel of life” mosaic above the Park Avenue entrance, which was made with 148,000 marble tiles.

An article over the weekend published in The New York Times stated:

Some guests on Thursday grumbled that the Waldorf needed some freshening up, that the carpet was worn, the furniture in the rooms scratched and dented, and the food warmed over.

The Waldorf has long had a reputation for elegance and élan, a reputation that began when it opened in 1931 as the largest, tallest and most expensive hotel ever built, with 2,200 rooms, 47 stories and construction costs that were estimated at more than $40 million. The hotel’s website listed single rooms for two adults for Friday night for $210 to $829.

“It’s the kind of place that, over a however-many-decade run, people had emotional attachments to,” said Shelley Clark, who was the Waldorf’s publicist from 1999 to 2006. “People made memories there. They got married there. They celebrated special occasions there. If you were a debutante, you made your debut there. It had a multi-, multigenerational impact.”

Just as the Waldorf’s construction budget was stratospheric for the Depression, so was its $1.95 billion price when it was sold in 2014. The buyer was the Anbang Insurance Group, a Chinese company with ties to Beijing’s ruling elite.

In 2015, after officials linked cyberattacks on government databases and email servers to Chinese hackers, President Barack Obama decided not to stay at the Waldorf when he was in New York for the United Nations General Assembly.

But Mr. Obama has his memories of earlier stays at the Waldorf, which played host to every president from Herbert Hoover on. Politicians also have memories of the Al Smith Dinner, as it is known, held at the Waldorf every year since 1945 and by tradition an occasion for politicians to deliver light and self-deprecating speeches. (Donald J. Trump broke with that tradition at last year’s dinner, when he aimed barbs at Hillary Clinton. He also compared himself to the son of God, saying he was just another “carpenter working for his father” when he was young.)

The dinner has “almost become synonymous with the Waldorf,” said Joseph Zwilling, a spokesman for the Roman Catholic Archdiocese of New York (the dinner benefits Catholic charities). “At least for the next few years it’s going to be strange to be heading anywhere but the Waldorf on the third Thursday in October.”

Large gatherings like the Al Smith Dinner led John Doherty, the executive chef from 1985 to 2009, to say he had fed more presidents and heads of state than any other chef.

“Every year we had 25 presidents and heads of state” who checked into the Waldorf as the United Nations General Assembly opened, Mr. Doherty said. “The number racks up pretty fast.”

He recalled hauling food past frozen-zone checkpoints a couple of blocks from the hotel — and once, when the guests were 3,500 patent lawyers, a near disaster. The menu called for steamed vegetables with beurre monté, a whipped butter sauce.

“We would cook them in advance, cook them down and heat them” just in time to be served, Mr. Doherty said. “The cooling down took a long time, and the chicken stock soured, but nobody knew it. And because the vegetables were in the refrigerator and cold, you couldn’t smell it.”

No one smelled it, that is, until the staff took the vegetables out of the refrigerator and began reheating them. “I walked in and I smelled sour vegetables for 3,500 lawyers,” Mr. Doherty said, adding that he ordered all 3,500 portions thrown out and new vegetables cooked in less than an hour.

Mr. Doherty said that he was “not romantically attached” to the Waldorf and that “it does need a transformation of some kind” — a modernization, he said.

But he is betting that customers at his restaurant, the Black Barn on East 26th Street near Madison Square Park, do have such an attachment. Once the Waldorf closes, he will serve a prix fixe menu with dishes from “The Waldorf-Astoria Cookbook,” which he wrote with John Harrisson.

We’re HustleTweeting about the Waldorf Astoria, and you’re more than welcome to join the conversation on the Hustle Twitter HERE and also on our hyper-interactive Facebook page HERE!