Novak Djokovic Leaves Blood on the Court as He Defeats Roger Federer in the U.S. Open Men's Finals 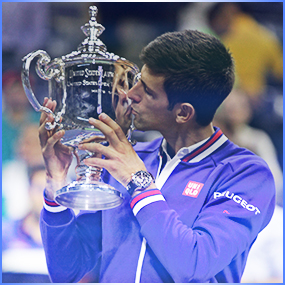 A three-hour rain delay only adds to the drama of the two best tennis players in the world in an epic showdown in Queens!

Novak Djokovic has clinched his third major title of 2015, the tenth of his career, and his second US Open Championship after a thrilling 6-4, 5-7, 6-4, 6-4 victory over his arch-rival Roger Federer. The 28 year old Serbian stopped Federer’s attempt, at 34 years old,  to become the oldest US Open champion in 45 yearsl

Djokovic added the US Open title to his Australian Open and Wimbledon victories this year. Had it not been for a loss to Stan Wawrinka in the French Open final in June, Djokovic would have been celebrating a rare calendar Grand Slam. Djokovic’s 10 majors takes him level with American Bill Tilden and just one shy of Bjorn Borg and Rod Laver on the all-time list. “I have tremendous respect for Roger and the challenge he presents,” said Djokovic, who is now 21-21 in career meetings with Federer. “He’s the best player ever. Coming out knowing you are playing against probably the best player in the history of the game adds to the pressure. I knew I needed to play my best in order to win. It’s an incredible evening. I Iove this sport and all these achievements are incentive for me to keep on going.”

“The rivalry, it has been a good one,” Federer said. “It’s always tough playing against one another. I think we walk away from it knowing more about our games and about ourselves really.”

Early in the match, Djokovic’s ankle buckled underneath him, either because of a misstep or because the court was still a little bit wet from the downpour. A scraped up elbow and wrist wasn’t going to stop Djokovic but rather just add to the drama of the most anticipated #1 vs #2 seed match-up in modern day tennis. Of course, we’re HustleTweeting about Novac Djokovic, and you’re more than welcome to join the conversation by following the Hustle on Twitter HERE or write to us directly at hustleoncrave@gmail.com Hey, have you checked out the Hustle’s Ultra High Quality You Tube Channel, with exclusive videos featuring the #HUSTLEBOOTYTEMPTATS SUPERMODEL OF THE YEAR … OUR WORLD EXCLUSIVE WITH MIKE TYSON … BROCK LESNAR’S “HERE COMES THE PAIN” … ICE-T AND COCO’s SEX SECRETS … MMA BAD BOY NICK DIAZ … the list goes on and on, so if you’re not subscribing, you’re missing something … and by the ways cheapos, it’s FREE! Yes, absolutely 100 percent FREE! What are you waiting for? Check it out HERE