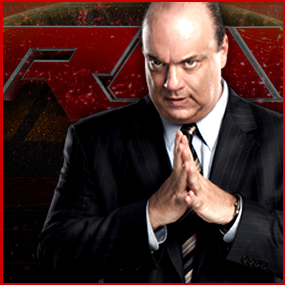 Our Boss … was BOSS … on Monday … with The Beast Who Conquered The Streak, Brock Lesnar!

When our boss Paul Heyman came down to the ring at the end of WWE Monday Night RAW and Triple H made it official that a Brock Lesnar vs John Cena match, for the WWE World Heavyweight Championship would main event Summer Slam 2014, not even we who are used to The Hustler De Tuti Hustlers were prepared for the sermon he was about to deliver. In Paul’s words, “to whit, we offer the following evidence” to demonstrate just why Paul and Brock Lesnar are so legendary together.

“Ladies and Gentlemen … My name is Paul Heyman and my client Brock Lesnar Conquered The Undertaker’s Undefeated Streak at WrestleMania. Which is why, at this moment, my client hereby officially announces his intention to conquer John Cena and take the WWE world heavyweight championship at SummerSlam.

Now, my client officially acknowledges this divide that permeates through the WWE Universe. There are those who wear their green t-shirts and pump up sneakers, and they scream with great passion their love and adulation for their hero by saying at the top of their lungs ‘let’s go Cena’. And there are those who offer the contrarian opinion and whose mommies don’t tuck them into bed at night and they will say with great fervor and passion ‘Cena sucks!’

Now, it doesn’t matter to my client which side of the fence you want to ride on. This malpracticing Dr. of Thuganomics is in for the beating of a lifetime. I don’t just stand out there and spew hype and hyperbole. I exploit historical facts to shove my points down your throats. To wit: I offer you what happened the last time my client, Brock Lesnar, zeroed in on someone and decided to give them a beating.

For years, everybody said I want to be the one to beat The Undertaker and snap The Streak. But that wasn’t good enough for Brock Lesnar. At WrestleMania, my client, Brock Lesnar, gave such a violent beating to the Undertaker that Vince McMahon had to ride in the ambulance to the hospital with the Undertaker because even our heartless chairman was concerned for a dead man’s well being and life.

Oh, John Cena? That same beating awaits you. And please don’t confuse my client with some stereotypical vilain that comes out here and say ‘John, you can escape this beating by giving up your title and laying it down at my feet.’ Brock Lesnar makes you no such offer. John Cena, you can’t escape this beating.

At SummerSlam, my client, Brock Lesnar, will take John Cena down.

John Cena, you are going to be hurt by Brock Lesnar.

And then … and only then … Brock Lesnar is going to F-5 John Cena and strip John Cena of the dignity of being the WWE world heavyweight champion the same way Brock Lesnar stripped the Undertaker of his dignity and exposed the streak as just being a myth; the same myth that Brock Lesnar hears every week on television when John Cena is referred to as being the greatest WWE champion of all time. Fifteen world titles in 10 years … now that sounds like something worth conquering.

I pledge allegiance to the greatness of the Conquerer who stands before me. And to his dominance, for which I stand, one Cenation, under John, now divisible, with no more Hustle, Loyalty, or Respect for all.

Ladies and gentlemen, my name is Paul Heyman and I’m the one behind the 1 in 21 and 1, and at SummerSlam, my client, Brock Lesnar, will beat John Cena and become the WWE heavyweight champion of the world.”

We’re HustleTweeting about Brock Lesnar vs John Cena … and about Paul Heyman’s promo … and you’re more than welcome to join the conversation by writing us on twitter HERE or write to us directly at hustleoncrave@gmail.com Hey, have you checked out the Hustle’s Ultra High Quality You Tube Channel, with exclusive videos featuring OUR WORLD EXCLUSIVE WITH MIKE TYSON … BROCK LESNAR’S “HERE COMES THE PAIN” … ICE-T AND COCO’s SEX SECRETS … MMA BAD BOY NICK DIAZ … the list goes on and on, so if you’re not subscribing, you’re missing something … and by the ways cheapos, it’s FREE! Yes, absolutely 100 percent FREE! What are you waiting for? Check it out HERE!