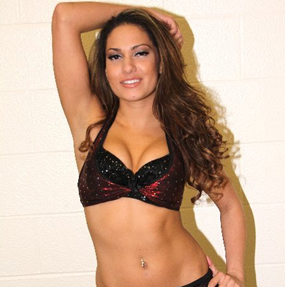 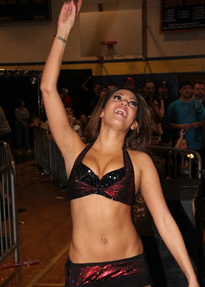 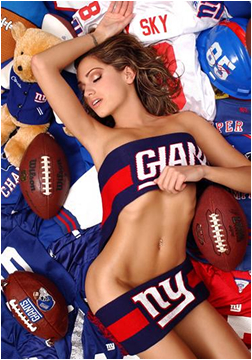 CLICK HERE FOR A GALLERY OF AMAZINGLY HOT PHOTOS OF REBY AS "THE GIANTS GIRL!"

Reby’s fanaticism for the NFL football team, coupled with her penchant for wearing skin-tight-and-barely-there Giants’ clothing during the games garnered her a wild legion of fans of her own, but now Reby has started to pull of the impossible.

Reby, who is currently dating TNA Wrestling’s MATT HARDY, has become half of pro wrestling’s most controversial couple outside of the ring. The two actually tweeted about it during the weekend, with Hardy of course enjoying the notoriety.

Hardy has been training Reby in the ring, and has been using her as his ringside manager / "valet" during his independent show appearances lately. The two are working on a routine together, and it is has been reported Hardy is looking to add Reby to his act on SpikeTV’s TNA iMPACT.

Reby, of course, is no stranger to pro wrestling fans, as she’s the host of MTV2’s "Lucha Libre USA Masked Warriors."

Of course, we’re HustleTweeting about Reby, and you’re more than welcome to join the conversation! Follow The Hustle on Twitter HERE or write to us at hustleoncrave@gmail.com

CLICK ON THE PICS BELOW TO SEE THE HEYMAN HUSTLE’S VERY OWN
BOB MULRENIN’S EXCLUSIVE PHOTO SESSION WITH REBY SKY!