Roman Reigns Smashes Riddle on Smackdown … but the Beast Is Back! 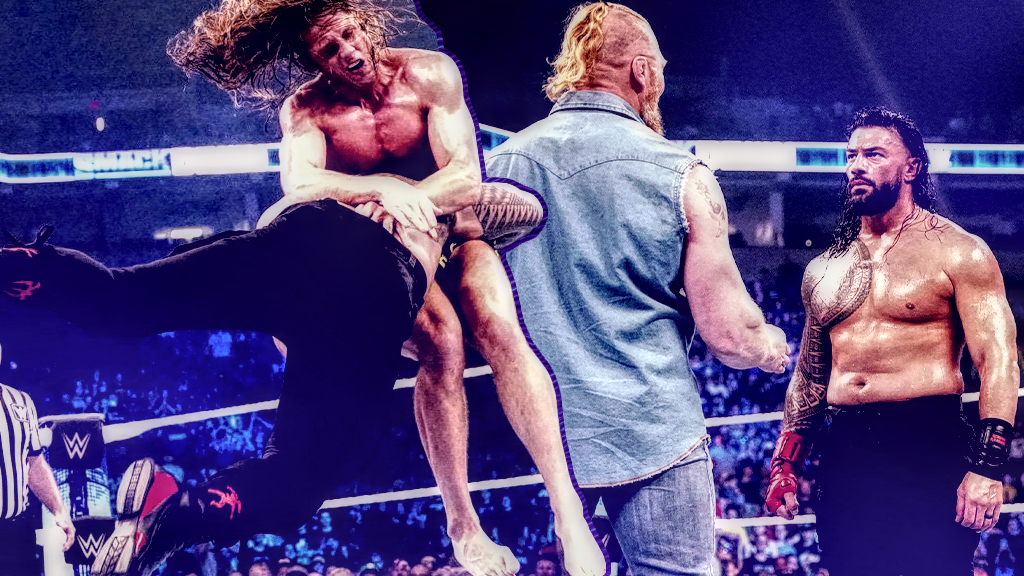 BRRRRRRRRRRRRROCK LESNAR is back. And he ruined The Bloodline‘s good time, as WWE’s Undisputed Heavyweight Champion Roman Reigns, our boss (his #SpecialCounsel) Paul Heyman and the Undisputed Tag Team Champions The Usos were on their way to a private jet following Reigns’ successful title defense against the challenge of Riddle.

In one of the biggest SmackDown clashes ever, “The Original Bro” Riddle and “The Head of the Table” Roman Reigns engaged in a tumultuous Undisputed WWE Universal Championship Match.

The stakes were high, with the stipulation that if Riddle lost, he would no longer be able to challenge for the title as long as Reigns was still champion. Riddle increased the pressure for himself, announcing earlier in the night that the contest would be dedicated to his RK-Bro brother, Randy Orton.

Riddle had a chance to take the title after landing a beautiful Floating Bro, but Reigns kicked out and took advantage by delivering a Uranage Slam followed by a vintage Orton back suplex onto the announce table, berating The Viper right to the camera.

Riddle executed some vintage Orton moves of his own, hitting Reigns with an Apex Slam and a back suplex onto the announce table to boot. With the Minneapolis crowd chanting for Randy, Riddle snapped a Draping DDT and geared up for an RKO, but Reigns countered with an Uranage followed by a jaw-dropping Superman Punch. Riddle was inches away from winning the title after hitting an RKO out of nowhere, but Reigns kicked out in the nick of time.

Riddle gave it his all, but Reigns came out on top by Spearing The Original Bro out of mid-air and walking out of a jam-packed SmackDown with the ultimate prize: the Undisputed WWE Universal Championship.

We’re HustleTweeting about Reigns vs Riddle and the return of The Beast, and you’re more than welcome to join the conversation on the Hustle Twitter HERE … on our ridiculously sensational Instagram HERE … or on our Facebook page HERE!