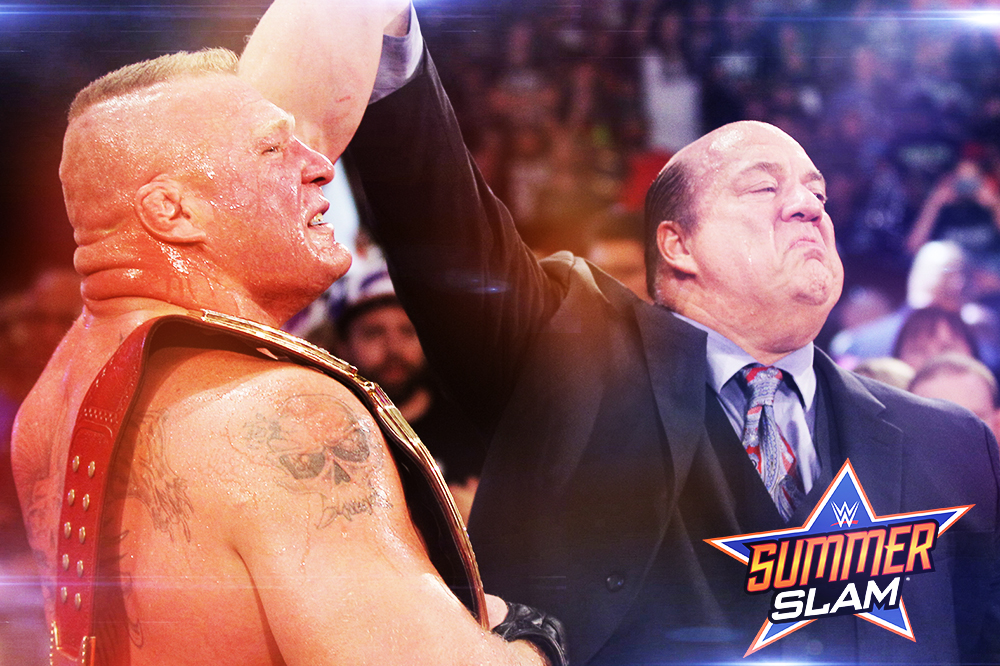 The Beast and his Humble Advocate (our boss) will remain in WWE.

Brock Lesnar successfully defended the Universal Championship in an epic, classic Fatal 4-Way Match which had Lesnar defending the title against Roman Reigns – Braun Strowman – Samoa Joe. According to WWE.com:

Brock Lesnar isn’t going away anytime soon, though not for lack of trying on the part of Roman Reigns, Samoa Joe and especially Braun Strowman.

In a match where The Beast Incarnate staked nothing less than his WWE future on the outcome, the reigning, defending, undisputed Universal Champion defeated his three opponents to retain his title in a SummerSlam Fatal 4-Way that all but reduced the Barclays Center to a smoldering crater at the corner of Atlantic and Flatbush.

While each Superstar was a destroyer in his own right, the four competitors picked a certain strategy throughout the course of the demolition-derby contest. Reigns played offense, dishing out Superman Punches and Spears at will, including one that plowed Lesnar through the barricade in the early goings of the match. Joe played spoiler, largely appearing whenever there was a weakened, staggered or otherwise compromised opponent ripe for his near-inescapable Coquina Clutch submission hold. Lesnar, who didn’t necessarily need to be involved in the conclusion of the match to lose his title, was left to play defense, fighting through onslaughts from his three opponents to stay in the eye of the storm at all times.

Then there was Strowman who, for lack of a better term, played the role of one-man wrecking crew, focusing most of his efforts on the champion himself. In a ploy to remove The Beast from the equation, The Monster Among Men put Lesnar through not one, but two of the ringside announce tables, then tipped a third on top of The Conqueror, leading ringside officials to carry Brock out on a stretcher. (A wailing Paul Heyman was on the verge of needing one in his own right as his client was carted away.)

Strowman, whose ear was bloodied after Reigns hit him with the steel steps, couldn’t quite close out against the two Samoans, despite breaking up a Coquina Clutch that nearly put The Big Dog to sleep. Had it stayed between those three, The Monster Among Men might have pulled out the win, but Lesnar wasn’t finished with him.

The Anomaly stormed back over the frantic, if ineffective, objections of WWE officials to turn the bout into a proverbial race to the finish, with each Superstar jockeying for position in brutal fashion. Reigns Superman Punched everything on two feet that wasn’t wearing a referee shirt and Speared Lesnar, only to suffer the brunt of a Coquina Clutch that was broken up, again, by Strowman. The Monster Among Men executed a Running Powerslam that would have gone for three had Brock not pulled the ref out of the ring. Lesnar, as he did before, countered Joe’s Coquina Clutch with an F-5, and Reigns broke up the three-count, finally bringing The Beast to the edge with a trifecta of Superman Punches. Yet, when he revved up for a potential final Spear, Lesnar hoisted him for a sudden-strike F-5 that ended the match in as brutal and abrupt a fashion as it began.

So, Brock Lesnar remains champion. Braun Strowman and Samoa Joe are left to lick their wounds. Roman Reigns comes up short. And the rest of us are left to ponder the biggest question of all: If these three can’t defeat Brock Lesnar, who on Earth can?