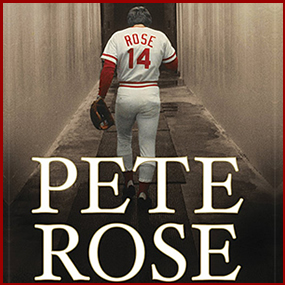 Pete Rose is back in the headlines. With all the controversy surrounding A-ROD AND PEDs IN MAJOR LEAGUE BASEBALL, the all time hit king is on the cover of the upcoming edition of Sports Illustrated, as the soon-to-be-released biography, “Pete Rose: An American Dilemma” by Kostya Kennedy has thrust the fact Rose has been banned for life from Major League Baseball right back into the spotlight. In the book, Kennedy contrasts Rose’s ban against the wave of PED suspensions that has brought scandal after scandal to the game of baseball, and wonders if there is an answer to a question that has plagued Major League Baseball for quite some time: Shouldn’t Pete Rose be in the Baseball Hall of Fame?

As Rose remains banned for betting on baseball during his years as a player and manager, he believes those who take PEDs have disgraved the game worse than he did. “They’re both bad. I think in my case, I know I didn’t do anything to alter the statistics of baseball,” Rose said on The Michael Kay Show on ESPN Radio. “As you know, baseball statistics are sacred. That’s why baseball cards are worth more than football cards, why that Honus Wagner card is going for a couple million bucks, why baseball memorabilia is much more valuable than football or basketball memorabilia.”

The man known as Charley Hustle (we love that nickname for so many reasons) continued, “I had nothing to do with altering statistics of baseball, and these guys, that take PEDs … wouldn’t it be nice if you could ask Babe Ruth the same question, or Roger Maris the same question or Hank Aaron, who won’t talk about it. I’d like to hear what their response will be because those are the guys who lost their records because of supposedly steroids.”

ALEX RODRIGUEZ,  who will be suspended for all of the 2014 season for his involvement in the Biogenesis scandal, admitted in 2009 that he had taken PEDs for three years, starting in 2001. Rodriguez has since denied he took any PEDs from Biogenesis or its founder, Anthony Bosch, but his appeal of his suspension was not overturned. It was, however, reduced from 211 games to 162 games and the 2014 postseason by arbitrator Fredric Horowitz on January 11th.

Rose, who says he has texted with Rodriguez, was glad to see him drop his lawsuit against Major League Baseball.  By dropping the lawsuit, Rodriguez officially accepted his 162-game suspension and will not be reporting to spring training for the New York Yankees, as he had stated he was going to do.

“Alex, sit out your year and keep yourself ready,” Rose said. “I wouldn’t be a bit surprised if he doesn’t come back and be a productive player. He loves the game, he loves the tradition of the game, he made a mistake like the rest of us did. It’s going to be interesting to see how Alex handles the offseason. I don’t want to hear he’s going to play for the (Long Island) Ducks or some independent league team. He doesn’t need to do any of that kind of stuff because then you’re creating a circus type of atmosphere.”

Of course, we’re Hustletweeting about Pete Rose and A-Rod, and you’re more than welcome to join the conversation HERE or write to us directly at hustleoncrave@gmail.com  Hey, have you checked out the Hustle’s Ultra High Quality You Tube Channel, with exclusive videos featuring OUR WORLD EXCLUSIVE WITH MIKE TYSON … BROCK LESNAR’S “HERE COMES THE PAIN” … ICE-T AND COCO’s SEX SECRETS … MMA BAD BOY NICK DIAZ … the list goes on and on, so if you’re not subscribing, you’re missing something … and by the ways cheapos, it’s FREE! Yes, absolutely 100 percent FREE! What are you waiting for? Check it out HERE!