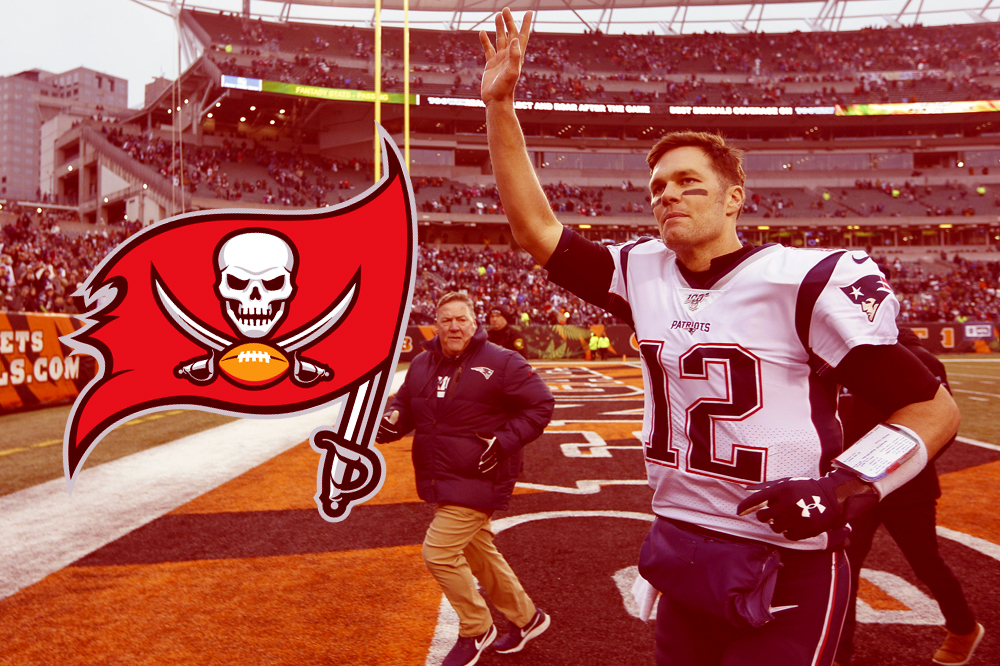 The Bucs spent the Bucs, and now the biggest name in the NFL is reportedly headed for Tampa Bay.

Tom Brady was not a free agent for long.

Just hours after announcing he would not be returning to the New England Patriots, Brady reportedly finalized an agreement to join the Tampa Bay Buccaneers on a deal worth roughly $30 million per year, NFL Network Insider Ian Rapoport reported.

While the deal is not signed, it has been agreed to in principle.

21 years into a legendary career, Brady is ready to begin another chapter.

Tom Brady is entering his age-43 season and 21st season in the NFL. 2020 will mark Brady’s first season with a team that is not the New England Patriots. A six-time Super Bowl champion (most all-time), 14-time Pro Bowler, three-time first-team All-Pro and three-time MVP with the Patriots, the future Hall of Famer is bringing an array of accolades with him to Tampa Bay.

Brady has as many Super Bowls wins (six) as the Buccaneers franchise has playoff wins (six). He has more career wins (249) and pass touchdowns (614) in his 20-season career, including playoffs, than the Buccaneers quarterbacks have in the last 30 seasons combined (210 wins, 585 pass touchdowns). Brady has 66,222 more pass yards, including playoffs, than Buccaneers’ career leader Jameis Winston.

To put that difference into perspective, only three players besides Brady have more than 66,222 career pass yards, including the postseason … and their names are Drew Brees, Peyton Manning and Hall of Famer Brett Favre.

Tampa Bay and the NFC might be uncharted territory for Brady, but the Buccaneers coaching staff features plenty of familiar faces. Buccaneers offensive coordinator Byron Leftwich was drafted in 2003, three years after Brady. As the starting quarterback for the Jaguars, Leftwich and Brady faced off twice: Week 15, 2003, when the Patriots defeated the Jaguars 27-13, and in the 2006 Wild Card Round, when the Patriots defeated the Jaguars 28-3.

Outside linebackers coach Larry Foote played against Brady seven times as a linebacker for the Steelers. Brady was 5-2 against Foote, including New England’s 41-27 win over Pittsburgh in the 2004 AFC Championship Game to reach Super Bowl XXXIX, which the Patriots won for their third Super Bowl championship in four seasons.

Offensive assistant Antwaan Randle El played against Brady six times as a wide receiver for the Steelers and Redskins. He was 1-5 against Brady, including the Steelers’ 2004 AFC Championship Game loss. Defensive coordinator Todd Bowles was the Jets head coach from 2015-2018 and Brady was 7-1 against the Jets in that span.

Finally, general manager Jason Licht was a scout and assistant director of player personnel for the Patriots from 1999-2002, making him a part of the front office that drafted Brady 199th overall in the 2000 NFL Draft.

2020 won’t just be Brady’s first season outside of New England — it will be his first season with a head coach that isn’t Bill Belichick. Luckily for Brady, he won’t be the first notable quarterback that Bruce Arians has coached. Buccaneers head coach Arians has coached a star-studded cast of quarterbacks in his time as a quarterbacks coach, offensive coordinator and head coach in the NFL, including Peyton Manning, Ben Roethlisberger, Andrew Luck and Carson Palmer.

Brady won NFL MVP in two of the three seasons in his career in which he had multiple pass-catchers with at least 1,000 receiving yards and at least five receiving touchdowns: 2017 (Rob Gronkowski and Brandin Cooks, Brady won MVP), 2011 (Gronkowski and Wes Welker, Aaron Rodgers won MVP), and 2007 (Hall of Famer Randy Moss and Welker, Brady won MVP). Evans and Godwin both had at least 1,000 yards and at least five touchdowns in 2019.

Despite the talent of the Buccaneers skill position players, Brady is walking into a much different defense than he is used to. The Buccaneers defense has been far less productive than the Patriots defense over the past decade: New England is first in scoring defensive since 2010, while Tampa Bay is 31st in that span. In 2019, the Buccaneers (28.1) allowed nearly twice as many points per game as the Patriots (14.1).

We’re HustleTweeting about Tom Brady, and you’re more than welcome to join the conversation on the Hustle Twitter HERE and also on our hyper-interactive Facebook page HERE!