Twin Peaks Fans Get The News They've Been Waiting To Hear For Years! 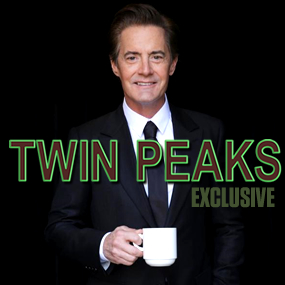 It’s Official … David Lynch to direct every episode of Showtime’s sequel-mini-series … and Kyle MacLachlan is back as Special Agent Dale Cooper!

Showtime scored big at their Television Critics Association presentation when actor Kyle MacLachlan took the stage to confirm the rumors that he will return as Special Agent Dale Cooper when Twin Peaks comes back to life on Showtime sometime next year.

“I’m very excited to return to the strange and wonderful world of Twin Peaks,” MacLachlan said at the event. And, in a way mysterious enough for the show, added “May the forest be with you.” It must be noted that Twin Peaks creators David Lynch and Mark Frost both wrote that line in their own tweets when they announced the show’s return last October.

MacLachlan also reportedly approached Showtime president David Nevins and referenced a popular line from the show, telling him, “I think you need a damn good cup of coffee.”

The nine-episode run will go into production this year with an eye toward premiering in 2016, the year that marks the 25th anniversary of the final installment of the beloved cult drama’s original run. Lynch and Frost are writing and producing the series, and Lynch will direct each episode. Beyond MacLachlan, no other cast members have confirmed involvement on the new run.

Appropriately, Nevins described his role in the making of the new Twin Peaks as “More or less writing checks and leaving them alone.” He added, “It’s David’s show; it’s Mark’s show. I will be the grateful recipient of it.” He also explained why the show is returning 25 years later: “25 years was the magic number (for Lynch),” Nevins said. “He pays attention to that numerology in a big way.”

Hmmmmmm… what does that mean? We’re HustleTweeting about it right now, and you’re more than welcome to join the conversation by following the Hustle on Twitter HERE or write to us directly at hustleoncrave@gmail.com Hey, have you checked out the Hustle’s Ultra High Quality You Tube Channel, with exclusive videos featuring OUR WORLD EXCLUSIVE WITH MIKE TYSON … BROCK LESNAR’S “HERE COMES THE PAIN” … ICE-T AND COCO’s SEX SECRETS … MMA BAD BOY NICK DIAZ … the list goes on and on, so if you’re not subscribing, you’re missing something … and by the ways cheapos, it’s FREE! Yes, absolutely 100 percent FREE! What are you waiting for? Check it out HERE!