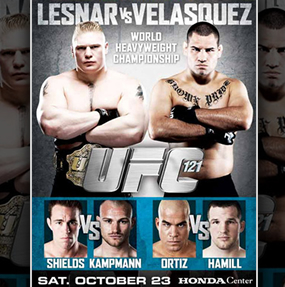 The Ultimate Prize Will Be On The Line Brocktober 23rd As The Undisputed Heavyweight Champion of the World Steps Into The Octagon Against His Most Dangerous Challenger To Date!

UFC has released the poster for the UFC 121 event scheduled for October 23rd at the Honda Center in Anaheim, California. The lineup is perhaps the deepest, most talent-rich display of UFC’s star power this
year.

In the main event, UFC Undisputed Heavyweight Champion Brock Lesnar will defend the title against the undefeated Cain Velasquez. This marks the second championship fight in a row for Lesnar defending against an undefeated challenger.

Also on the pay per view card is Gabriel Gonzaga vs Brendan Schaub; and Diego Sanchez vs. Paulo Thiago.

We’re HustleTweeting about this awesome lineup, and you’re more than welcome to join the conversation. Don’t be left out, let the world know what you’re thinking. Follow THE HEYMAN HUSTLE on Twitter HERE

CLICK ON THE VIDEO BELOW TO SEE PAUL HEYMAN AND AOL FANHOUSE’S
ARIEL HELWANI DISCUSSING UFC 121 LESNAR VS VALASQUEZ! 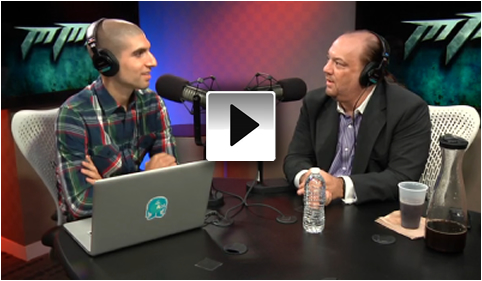