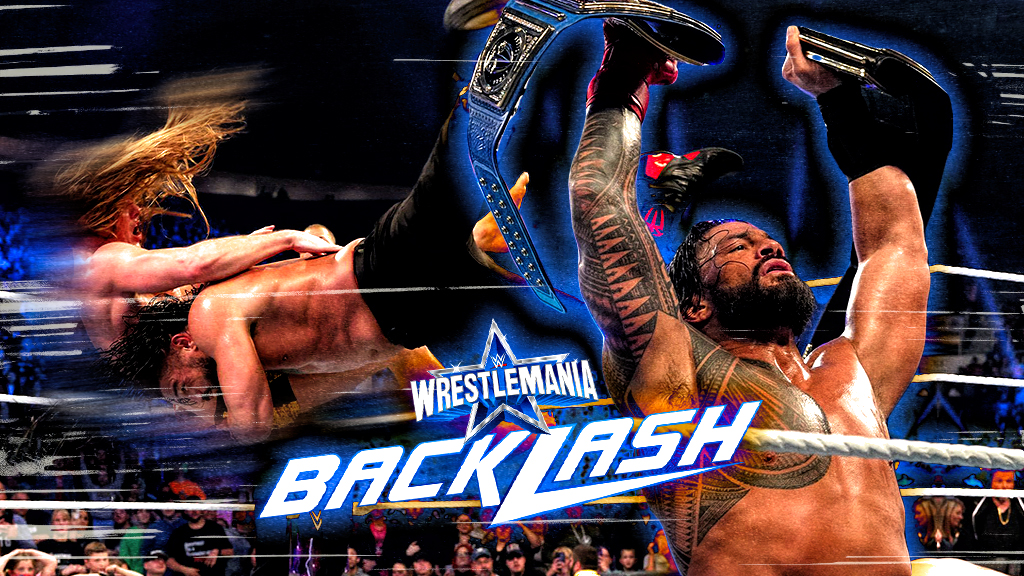 In the main event of a stellar WWE Premium Live Event offering entitled WrestleMania Backlash, the dominance of The Bloodline (Undisputed Champion Roman Reigns – our boss / his #SpecialCounsel Paul Heyman – Smackdown Tag Team Champions The Usos) continued in a wild victory over the formidable team of Drew McIntyre and the RAW Tag Team Champions Randy Orton and Riddle (RK Bro).

The ring could barely contain all six of the high-profile Superstars as they stared one another down before the opening bell. The trio of RK-Bro & Drew McIntyre picked apart Jimmy Uso in the opening minutes of the match before The Scottish Warrior called out Roman Reigns for a one-on-one fight. But The Head of the Table proclaimed “he calls the shots” and tagged in his cousin Jey Uso. McIntyre responded by quickly leveling Jey with a big boot while leering directly at Reigns.

After tagging in Riddle, the SmackDown Tag Team Champions turned the tide with a quick tag, smashing The Original Bro and taking a few cheap shots behind the referee’s back. Somehow Riddle withstood the devastation from The Bloodline and fired out of the corner with a dropkick to Jey to tag in McIntyre just as Reigns tagged himself in.

McIntyre stood toe-to-toe with the Undisputed WWE Universal Champion, dropping Reigns and his cousins with a flurry of neckbreakers, but as McIntyre sent Jey tumbling to the floor with a right hand, Reigns flew in for a Superman Punch to swing the momentum back toward The Bloodline.

The Head of the Table pummeled McIntyre, but after unwisely taking a moment to gloat with both titles, Reigns turned around into a Claymore. Instead of going for a cover, though, McIntyre tagged in The Viper to lay waste to Jimmy Uso in vintage Randy Orton style. The Bloodline jumped in to try and help Jimmy Uso, but despite Jey Uso catching Orton with a Superkick, The Viper swatted away The Bloodline with a pair of RKOs. Chaos broke loose from there as The Usos dropped McIntyre with a double Superkick before Riddle cleared house and flattened Jey with a Floating Bro for a stunning near fall.

The two trios traded near-falls before action spilled outside the ring where Reigns dropped Orton with a Superman Punch and sent McIntyre crashing through the announce table with a massive Urinagi. The sole man left standing, Riddle flew through the ropes to take out Reigns, but Jey was hot on his heels with a dive to the outside. After a flurry of kicks, Riddle caught Jey with an RKO from the top rope, but did not see the tag from Reigns, who plowed through Riddle with a Spear to earn a hard-fought victory.

When the dust settled, The Bloodline stood tall, proving once again that they’re on another level.

We’re HustleTweeting about WrestleMania Backlash, and you’re more than welcome to join the conversation on the Hustle Twitter HERE … on our ridiculously sensational Instagram HERE … or on our Facebook page HERE!