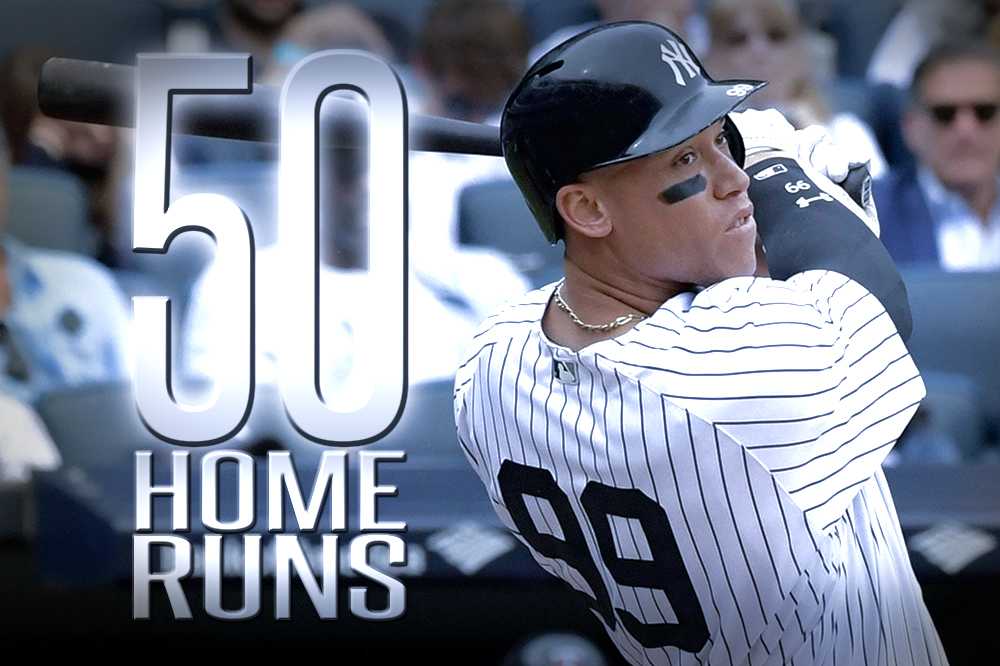 Aaron Judge continues to step into the spotlight in Da Bronx. The right fielder for the New York Yankees has become the first rookie in history to hit 50 home runs.

Judge took Jakob Junis deep in the third for a two-run, opposite-field shot to tie Mark McGwire’s rookie record of 49 home runs set in 1987 with the A’s and then launched another off Trevor Cahill in the seventh to become the first Yankee to hit 50 homers since Alex Rodriguez’s 54 in 2007.

After the record-breaker, Judge took a curtain call.

It didn’t last long, as Gary Sanchez immediately followed with a laser shot into the left-field seats.

The blasts continued another torrid stretch for Judge, who has homered twice in consecutive games and four times in his last 14 games.

When he came to the plate again in the eighth, there were chants of “MVP” before he walked.

Prior to this resurgence, Judge had a 15-game homerless streak when he went 8-for-51 with 20 strikeouts, part of the swoon he fell into following the All-Star Game and the Home Run Derby.

“The way he started [the season], I thought he was gonna hit 60 or 70,” Sanchez said through an interpreter. “He went into a slump like we all do, but I always had faith and this is the result you’re seeing. This is what he’s capable of.”

Sanchez’s homer gave him 33 for the season, and that’s with the catcher missing a month with a strained biceps.

Finally healthy, Greg Bird continued his late bid to save what looked like another lost season with his sixth home run since returning from the disabled list August 26.

“This is the time of year you want your players to get hot,” skipper Joe Girardi said of his young sluggers. “They’re playing extremely well down the stretch. It’s really important they continue to do this. They don’t look fatigued. They look like they’re in a good spot and we’ll try to keep them there.”

No one, though, is in a better spot than Judge.

And he made CC Sabathia’s day easier.

In a makeup game from a May 25 rainout, the lefty retired the first 10 batters he faced and shut down Kansas City until the seventh, when Eric Hosmer singled and Salvador Perez and Mike Moustakas hit back-to-back homers to make it 6-3.

Chad Green came on to finish the seventh and David Robertson and Tommy Kahnle tossed scoreless innings to finish the game as the Yankees won for the ninth time in 12 games. They also improved to 9-1 in their last 10 games at home, which bodes well for a potential wild-card game next Tuesday … especially with Judge’s dominance at the Stadium. Of his 50 homers, 31 have come at home.

And they can almost come upon request.

After Judge hit his first homer of the afternoon, Didi Gregorius saw him in the video room and told him, “You might as well break [the record] today.”

Judge listened and has now homered against every team in the American League.

McGwire, now the bench coach for the Padres, sent Judge a congratulatory message after setting the new mark.

“There’s still time for him to go,” Bird said. “Everyone understands there’s still work to be done. We clinched [a playoff spot], but we’re not where we want to be. We’ve got to keep going.”

If Judge keeps this up, their chances will be pretty good … and maybe Monday’s curtain call won’t be his last.

“Our players encouraged him to go out,” Girardi said. “With what he did today, reaching that milestone, I think he deserved it.”

We are HustleTweeting about Aaron Judge, and you’re more than welcome to join the conversation by following the Hustle Twitter HERE and also liking our hyper-interactive Facebook page HERE!