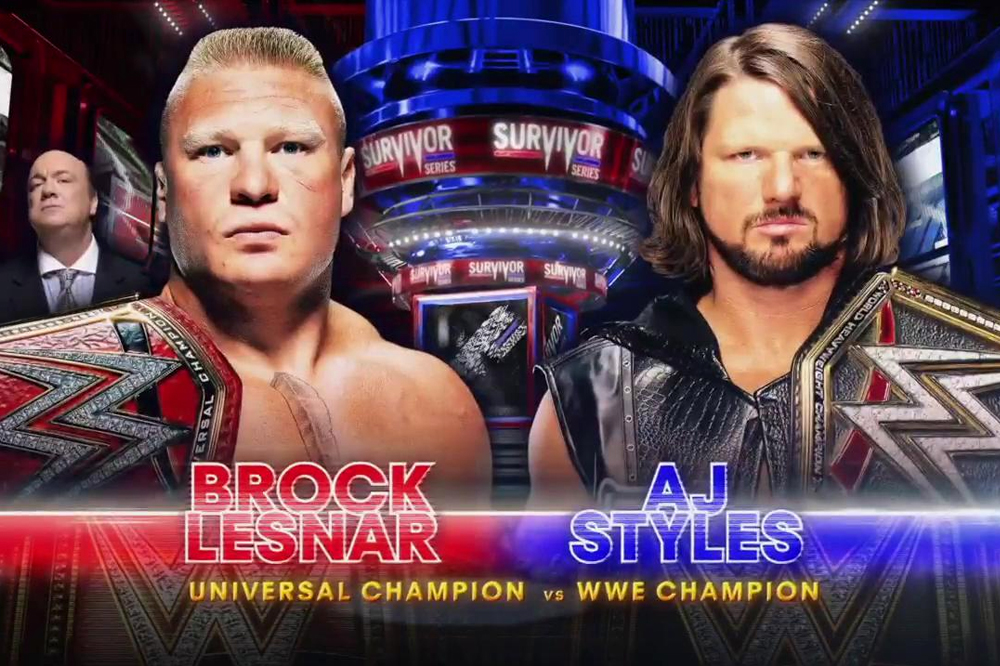 WWE Survivor Series has a new hook. Universal Champion Brock Lesnar will now face AJ Styles, as “The Phenomenal One” defeated Jinder Mahal for the WWE Championship on Smackdown Live from Manchester, UK. According to WWE.com:

With both the WWE Championship and the opportunity to clash with Universal Champion Brock Lesnar at Survivor Series on the line, WWE Champion Jinder Mahal and AJ Styles dazzled the rabid WWE Universe in Manchester by slugging it out for the title in one of the biggest main events in SmackDown LIVE history.

With a chance to become WWE Champion for the second time, The Phenomenal One was amped up, but Mahal was at the top of his game, occasionally manhandling Styles and viciously throwing AJ into the announcer’s table. Methodical in his approach, The Modern Day Maharaja attempted to wear down Styles, but the challenger phenomenally fired back with a stinging barrage of strikes and high-impact maneuvers. Styles’ offense would often come in spurts though, as Mahal was able to use his size and strength advantages time and again to regain control.

In the contest’s final moments, Styles’ appeared to be closing in on the title when he connected with a breathtaking springboard 450 splash onto the WWE Champion, but the sneaky Singh Brothers pulled Mahal out of the ring, and thus out of danger from being defeated. This prompted The Phenomenal One to pummel The Singhs on the outside, taking them out of the equation. However, it seemed the distraction would cost Styles, as it allowed The Modern Day Maharaja to counter a Phenomenal Forearm attempt into Khallas, yet AJ narrowly got his foot on the bottom rope to break up the count.

Mahal then horrifyingly attempted a Khallas from the top rope, hoping to end the battle once and for all. The ever-resilient Styles countered by stunning The Modern Day Maharaja and dropping him neck-first on the top rope, giving himself the opening to soar into the skies and connect with The Phenomenal Forearm for the incredible championship victory. A furious Mahal took out his post-match aggression by bashing The Singh Brothers while Styles celebrated with the WWE Universe.

Styles’ win meant several things: The Phenomenal One was now a two-time WWE Champion, Mahal’s much-discussed reign was over, the WWE Championship had changed hands outside of North America for the first time ever and the Champion vs. Champion showdown was now AJ Styles vs. Brock Lesnar at Survivor Series. Wow, wow, wow.

We’re HustleTweeting about WWE SmackDown Live and WWE Survivor Series, and you’re more than welcome to join the conversation on the Hustle Twitter HERE and also on our hyper-interactive Facebook page HERE!