The Clock Ticks Away on Alistair Overeem's UFC Career 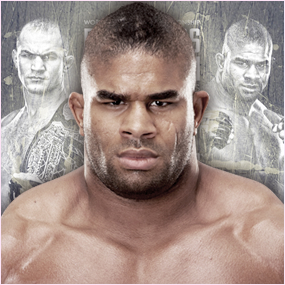 His name is Dana White. He’s the President of UFC. And he’s pissed off beyond belief.

The Ultimate Fighting Championship Heavyweight Title Match pitting Junior Dos Santos against Alistair Overeem is in jeopardy after Overeem tested positive for elevated levels of testosterone.We don’t just mean he went a little above the 1-1 levels he’s supposed to hit. Overeem reportedly tested at 14-1. There’s no getting by this one. Under NSAC guidelines, anything above a 6-to-1 ratio is considered a violation.

A random drug test was conducted on March 27 in Las Vegas, when six fighters in the top-three bouts at UFC 146 were gathered for a news conference to promote the May 26 event. Overeem tested positive for increased testosterone levels. “I am beyond pissed about this,” Dana White stated on Wednesday, before launching into a profanity-laced tirade. Dos Santos, Frank Mir, Cain Velasquez, Roy Nelson and Antonio Silva all tested negative, the Nevada State Athletic Commission noted.

Overeem will need to appear before the NSAC in order to be licensed in the state. It is great irony that Overeem’s test came back positive on the same week his former foe Brock Lesnar returned to the world of professional wrestling by hitting John Cena with an F-5 on WWE Monday Night Raw the day after WrestleMania.

En route to his 1st round destruction of Lesnar, however, Overeem hit a snag. He missed a drug test in Nevada, saying he had returned to Holland to be with his sick mother. A pair of drug tests conducted in Europe were then mishandled until he eventually submitted a sample to an accredited lab. He passed that test, along with a subsequent test in Nevada prior to UFC 141, and was granted a conditional license. Among the conditions of that license, he would be subjected to random tests throughout 2012.

“The worst part is that he sat in front of us and lied to us,” said Dana White, noting that Overeem has been in UFC’s offices meeting with him and C.E.O Lorenzo Fertitta, where he insisted he was clean and would pass all drug tests.

We could post all of Dana White’s profanity-laced comments, but we think you get the point. Seeing opportunity, Frank Mir has stepped up looking for the title match.

“I would be excited if given the opportunity to compete for the UFC’s heavyweight title at UFC 146 if the reports released earlier today regarding Alistair Overeem failing his A sample drug test are true,” Mir said in a release issued by his management. “I have been fortunate to be able to fight in the UFC for more than a decade, and it is a dream of mine to become the first three-time heavyweight champion in the UFC. Being able to fight Junior Dos Santos would put me one step closer to that dream.”

Of course, we’re HustleTweeting about the Alistair Overeem controversy, and you’re more than welcome to join the conversation by following THE HEYMAN HUSTLE on Twitter HERE or write to us directly at hustleoncrave@gmail.com  Hey, have you checked out the Hustle’s Ultra High Quality You Tube Channel, with  exclusive videos featuring BROCK LESNAR’S “HERE COMES THE PAIN”  … ICE-T AND COCO’s SEX SECRETS … THE ULTIMATE WELTERWEIGHT BAD ASS NICK DIAZ … CONTROVERSIAL TEEN SENSATION TAYLOR MOMSEN … LEGENDARY MMA PIONEER FRANK SHAMROCK … THE WALKING RIOT MISSY HYATT … if you’re not subscribing, you’re missing something … and by the ways cheapos, it’s FREE! Yes, absolutely 100 percent FREE! What are you waiting for? Check it out HERE!