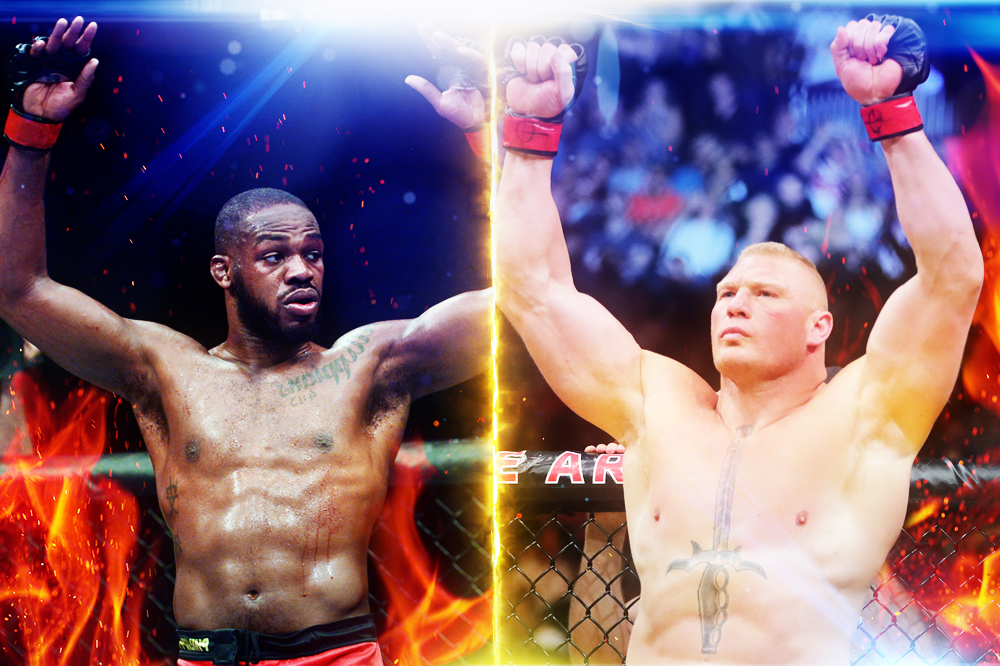 The Associated Press asked WWE Universal Champion and former UFC Heavyweight Champion Brock Lesnar for a response to Jon Jones’ statement that he is interested in a fight against Lesnar in a UFC octagon. Reporter Greg Beacham broke this story tonight:

If Jon Jones is really interested in taking on Brock Lesnar in a UFC superfight, Lesnar will be ready to roll.

Jones is preparing for his rematch with Daniel Cormier in the main event of UFC 214 this weekend, but he made headlines during a recent Facebook Live chat by saying he would love to take on Lesnar, who is back in professional wrestling after his return to the octagon at UFC 200 last year.

Jones added that he thought Lesnar would never accept such a fight, which would certainly be one of the biggest events in mixed martial arts history.

When Lesnar was contacted by The Associated Press for a response Tuesday, the former heavyweight champion made his willingness clear.

“Would I fight Jon Jones? Anytime, anywhere,” Lesnar said. “Right now he should be worried about D.C. on Saturday night.”

With that statement, Lesnar also indicated he is at least contemplating a return to the sport in which he won the UFC title in just his fourth professional fight.

Lesnar is a friend and supporter of Cormier, who has reigned atop the light heavyweight division for two years during Jones’ numerous troubles outside the cage.

Jones beat Cormier in their first meeting in January 2015, but was stripped of his 205-pound title after his involvement in a hit-and-run accident in New Mexico. The fighters were slated for a rematch at UFC 200 last July, but Jones was pulled from the bout and hit with a yearlong suspension for failing a doping test.

Lesnar beat Mark Hunt at UFC 200 in a unanimous decision that was changed to a no-contest after Lesnar also failed a doping test. He also received a one-year suspension from the Nevada Athletic Commission, but could return to MMA after completing the ban.

Any potential fight with Jones couldn’t happen until the 40-year-old Lesnar’s WWE contract ends next year, but Lesnar’s stardom hasn’t dimmed in the wrestling ring or in the octagon, where he remains arguably the most popular fighter in UFC history.

Lesnar and Jones would stand to make extraordinary paychecks from a superfight. Jones, still widely considered the top pound-for-pound fighter in MMA despite his troubles, would have to move up to heavyweight, a transition that Jones has long contemplated.

“He’s a massive dude,” Jones said in his Facebook chat. “It would be a massive draw, really big for the sport. It would be a great challenge. That’s a big old boy. I doubt Brock Lesnar would take that fight, though. I definitely wouldn’t try to wrestle with him the whole time. I’m not going to tell you what I would do.”