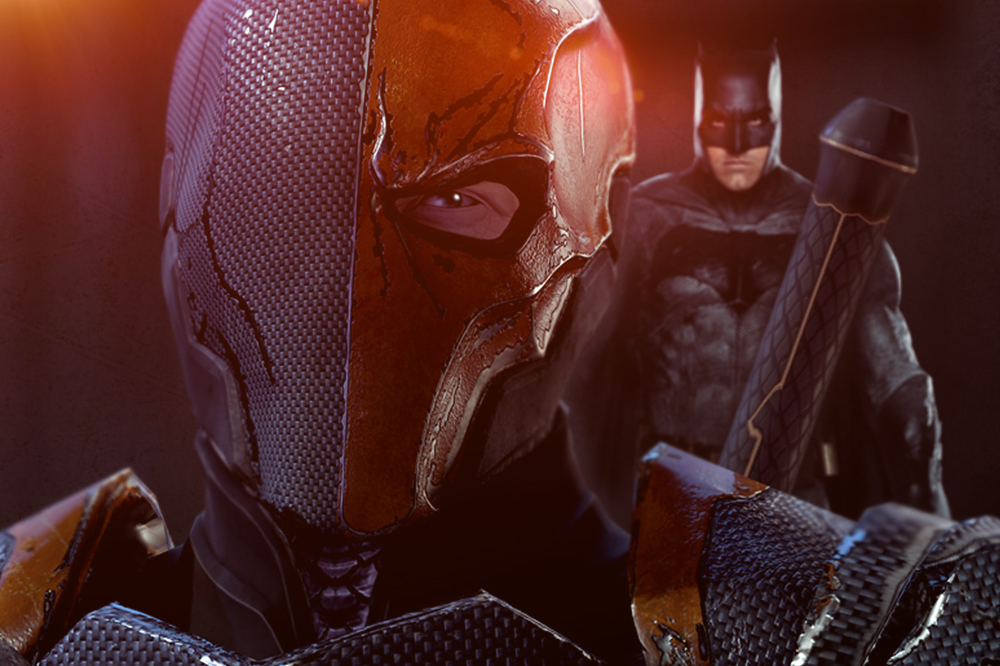 The Story Behind “Deathstroke!”

Yesterday, one of the coolest and most shocking reveals in comic book film history came out of nowhere as Batman himself, Ben Affleck, took to his social media accounts to post footage of the greatest assassin in all the DC Comics universe and, reportedly, the main villain in Affleck’s upcoming Batman solo flick: Deathstroke.

In case you’re not familiar with the character and are currently left wondering who exactly the masked badass with the sword strapped to his back is, THE HEYMAN HUSTLE has you covered…

In the comics, Deathstroke is Slade Wilson. Originally a colonel in the U.S. Army, having faked his age and enlisted at only 16-years-old, Wilson was part of an experimental super-soldier program where he gained enhanced strength, agility, speed, and intelligence. He became a metahuman mercenary soon after the experiment and, being a master strategist and tactical genius, rapidly gained a reputation as the world’s greatest hired gun. You may have also noticed that one side of Deathstroke’s mask doesn’t have an eye hole. That’s because he’s missing an eye. That’s right. One eye. Still the world’s most lethal assassin.

The video reveal, which appears to be test footage, naturally sent fans into a frenzy of excitement and speculation. Despite being confirmed to be the primary villain in the forthcoming Affleck-directed standalone Bat-film (currently slated to happen within the next two years), many were left speculating that Deathstroke could also now appear in the upcoming Justice League, which is currently filming in London. In the footage, Deathstroke does definitely seem to be on the set of Justice League (more specifically, the hangar of Batman’s “Flying Fox” vehicle, which serves as a base for the Justice League). And who is that behind Deathstroke’s mask in the footage? Rumors seem to suggest that it just might be Joe Manganiello (Sam Raimi’s “Spider-Man”, “True Blood”, “Magic Mike”), after he reportedly auditioned for the role of Deadshot in “Suicide Squad” (which instead went to Will Smith) and for a secret role in Affleck’s Batman film. The fact that Manganiello, coincidentally, also made a recent trip over to the UK further drove speculation that he’ll be taking on the role and facing off with The Dark Knight.

Deathstroke has arrived in the DC Universe, and you’re more than welcome to join the conversation by becoming a HustleTweeter. How does one do that? Simple! Follow the Hustle on Twitter HERE and also on our hyper-interactive Facebook page HERE!