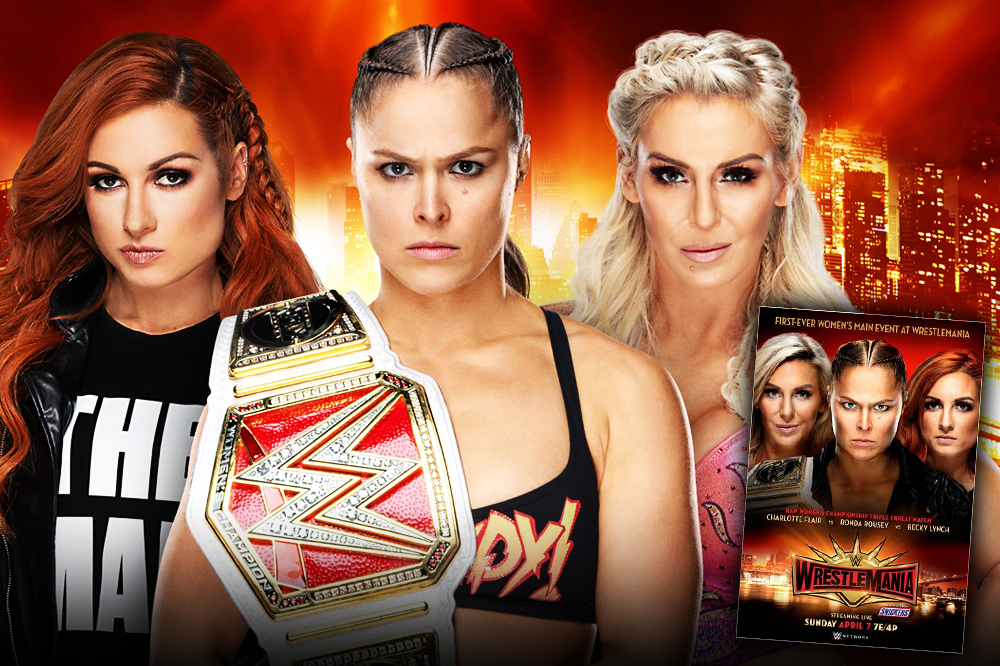 WWE has announced that Sports Entertainment’s biggest event of the year, WrestleMania, will feature Ronda Rousey defending her WWE Women’s Championship against Becky Lynch and Charlotte Flair in the main event. This is no surprise to us here at The Heyman Hustle, as our boss, Paul Heyman spoiled that Charlotte Flair would be the first female to main event WrestleMania, as seen in this EXCLUSIVE video uploaded on our YouTube channel.

As reported by WWE.com:

For the first time in WWE history, a women’s match will be the main event of WrestleMania as the Raw Women’s Championship Match featuring Ronda Rousey vs. Charlotte Flair vs. Becky Lynch will take place on Sunday, April 7, in front of a capacity crowd at MetLife Stadium and streaming live on WWE Network around the world.

Ronda Rousey is the current Raw Women’s Champion, Olympic medalist, the first female UFC Champion and the first woman to be inducted into the UFC Hall of Fame. She is also an actress and New York Times bestselling author. Charlotte Flair is a seven-time Champion in WWE, a former Division 1 volleyball player, philanthropist and author. She is the daughter of two-time WWE Hall of Famer Ric Flair. Becky Lynch is the 2019 Women’s Royal Rumble winner, a two-time SmackDown Women’s Champion and was named Wrestler of the Year by both Sports Illustrated and CBS Sports in 2018. She was also the first woman ever to top ESPN’s WWE Power Rankings.

At WrestleMania 32 in 2016, WWE re-branded the Divas Division the Women’s Division and unveiled a new Women’s Championship title. Since that time, the women’s evolution has placed a greater spotlight on WWE’s female Superstars, including more prominent storylines and deeper character development that showcases their athleticism, charisma and star power.