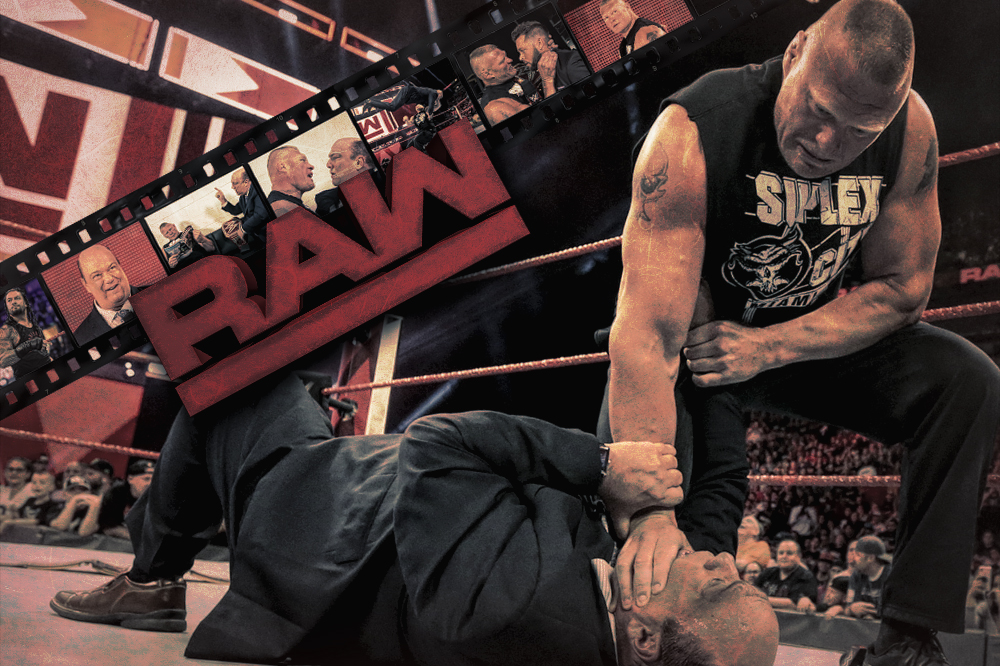 In one of the most eventful episodes of WWE Monday Night RAW of the modern era, Universal Champion Brock Lesnar returned … and all hell broke loose. Let’s start from the beginning, according to WWE.com:

In 2012, Brock Lesnar appeared, unannounced, to kick-start his second run in WWE. Tonight, Brock Lesnar, despite having been advertised, refused to come to the ring and confront his SummerSlam challenger, Roman Reigns.

Such has The Conqueror’s power grown since becoming Universal Champion, and his decision to simply stay in his private locker room instead of going nose-to-nose with Reigns has been consistent with his actions over the past several months. Ever since re-signing with WWE after WrestleMania, Lesnar has flouted his dominance and used his championship as something of a contractual bargaining chip en route to his desired goal of becoming a two-sport titleholder across WWE and UFC. According to Heyman, The Beast isn’t exactly sweating Reigns following his (controversial) win over The Big Dog at the Greatest Royal Rumble.

This isn’t to say Lesnar wasn’t there. As Paul Heyman pointed out to Reigns when he emerged in his client’s stead, The Beast was indeed in the building, though he would not come to the ring until and unless he felt like it. So, Reigns opted to give Heyman an aggressive pre-SummerSlam message to dictate to his client. Heyman obliged, but Lesnar didn’t just disregard the message, he destroyed it, whipping Heyman’s cell phone across his locker room when the advocate attempted to show him what Reigns had said.

All throughout Raw, Kurt Angle tried everything he could to get Brock Lesnar to come to the ring — he even had Roman Reigns banned from the building at Stephanie McMahon’s request — but his biggest threat was that he would fire Paul Heyman if The Beast failed to show. Surely, if anything would rouse The Beast into action, it would be the defense of his most strident and loyal advocate, right? Not necessarily.

Not only was Lesnar completely unmoved by Heyman’s plight — he made it perfectly clear that he tolerates Heyman’s “leeching” because it gets him paid during a tense backstage meeting — he only treated Heyman slightly less roughly than he did Angle when The Conqueror finally emerged from his locker room.

Heyman had been reduced to a pleading mess before Brock made his presence known, frantically admitting Brock is a bad champion and claiming he tried to “rehabilitate” The Conqueror in Angle’s image before falling to his knees and pleading for mercy from the Raw General Manager. Brock’s music hit, and a relieved Heyman slipped right back into hype man mode as The Beast Incarnate dropped Angle with an F-5 after almost zero warning. (Constable Baron Corbin, having already been punched in the face by Reigns after The Big Dog was banned, wisely hit the bricks).

As he so often has, Heyman celebrated the champion’s dominant display, only for Lesnar to grab him by the face and shove him down to the mat while the WWE Universe rained chants of “We want Roman” down on the Universal Champion. Of course, Reigns wasn’t there anymore, and it remains clearer that Brock Lesnar answers to no one. Not the General Manager. Not his advocate. Not the Constable. If anybody wants him to stop, the solution is as simple as it is daunting: Somebody needs to stop him. The question is whether anybody can.