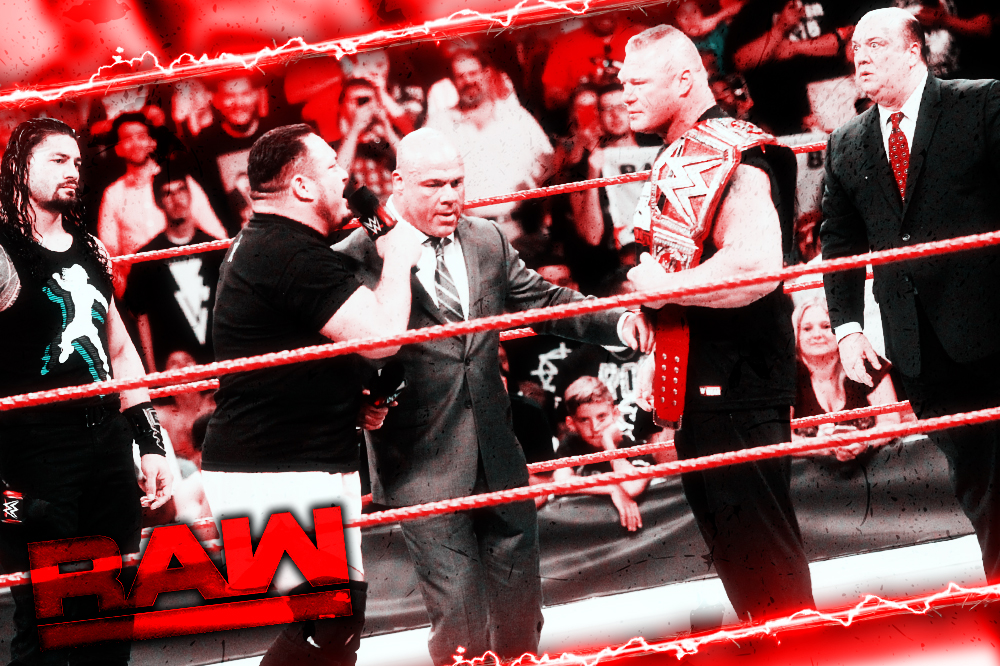 WWE Monday Night RAW will forever be remembered as the night Brock Lesnar said to Roman Reigns, “You don’t deserve shit!” In one of the most heated, intense segments on RAW in years, Lesnar (along with our boss, his Advocate Paul Heyman), Reigns and Samoa Joe were all involved in a situation hosted by RAW General Manager Kurt Angle. Watch the fireworks explode as the alpha males of WWE‘s Monday night programming go head to head to head.

That Braun Strowman managed to walk away from Roman Reigns’ savage, post-Ambulance Match attack on his own power is nothing short of a miracle, even if The Monster Among Men hasn’t been seen since and Raw General Manager Kurt Angle wasn’t sure if, or when, he’d return. That said, Reigns did lose that match, and his continued claim to the Universal Title picture thus came under scrutiny.

When an unapologetic Reigns interrupted The Olympic Hero’s confab with Brock Lesnar and Paul Heyman, The Beast questioned why Reigns’ presumed, self-proclaimed No. 1 contender status should stand in the wake of a loss. The final voice in the growing chorus of naysayers turned out to be Samoa Joe, who pointed out (not incorrectly) that Brock barely beat him at WWE Great Balls of Fire and Reigns has never beaten him.

Angle’s solution? Reigns and Joe would face off next week in a No. 1 Contender’s Match, with the winner to face The Beast for the title at SummerSlam — and if any of them laid hands on each other throughout the rest of the night, the match would be called off.

We’re HustleTweeting about WWE’s Universal Champion Brock Lesnar, and you’re more than welcome to join the conversation on the Hustle Twitter HERE and also on our hyper-interactive Facebook page HERE!