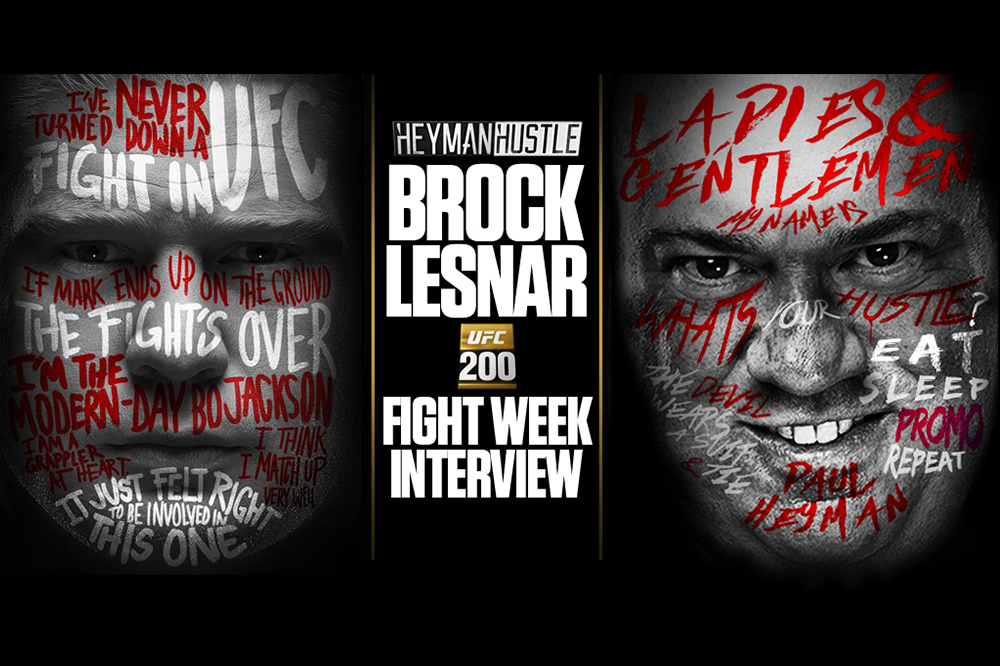 In his very first interview for UFC 200 Fight Week, Brock Lesnar sat down and talked with his Advocate, our boss Paul Heyman and offered his opinion on what will happen when the cage door gets locked.

Paul Heyman posted an EXCLUSIVE blog on Yahoo! Sports describing the mind set of Brock Lesnar going into the fight this Saturday night:

Ladies and gentlemen, my name is Paul Heyman, and I serve as the advocate on WWE television for Brock Lesnar. This Saturday night, July 9, Brock Lesnar will fight Mark Hunt in an unscripted athletic competition as the co-main event of the biggest mega-event in mixed martial arts history, UFC 200. When I say “an unscripted athletic competition,” that’s just an extended, too-many-words version of simply stating the obvious.

There are so many selling points to this match. Will this be the final time Brock Lesnar ever fights again? What happens if Brock goes in for the takedown (which is all but guaranteed), and Mark Hunt, “The Super Samoan” with the greatest one-punch-knockout power in UFC, tags Brock as Brock shoots in? What happens if Brock DOES get the takedown? Does Mark Hunt have a game plan to counter Brock’s destructive power on the ground? If this is, indeed, the final time Brock Lesnar ever enters the Octagon, will the crowd salute the number one box office attraction in UFC history, or will they bid good riddance to the “Beast” they never truly understood?

It’s all so fascinating to me.

Just so you understand the relationship I have with Brock Lesnar, these are all questions I usually propose to him as we plot and plan and conspire our way through this historic streak-beating WWE run. But not for this event. I have not mentioned any of these scenarios to Brock. Bluntly, he’s un-interested. He has one thing on his mind. And while you may be thinking “of course he does, he’s obsessively thinking about the fight,” that would actually be a mis-categorization of his mind set.

Brock Lesnar is enjoying himself. He’s been a competitor since he was 5 years old, and he has nothing but fond memories about his amateur career as an athlete. His professional career? Well that’s another story. Skyrocketing to global glory by knocking out the legendary Randy Couture, Brock was on top of the world until diverticulitis taught him a life-affirming lesson in humility.

From the postponement of the Carwin fight, to the cancelation of the Dos Santos bout, to the losses he suffered at the hands of Cain Velasquez and Alistair Overeem (for which Brock makes no excuses), Brock Lesnar did not get a chance to truly enjoy his experience competing in UFC. This time, in 2016, the 38 year-old (almost 39) once-ever athlete has been blessed with the opportunity to enjoy his training camp. Enjoy pushing his body. Enjoy expanding his mind to learn, accept and adapt to new disciplines. Brock Lesnar is enjoying the simple peace of mind that he is well-prepared, and 100 percent healthy leading up to a fight that has captured the imagination of the entire sports, entertainment and sports entertainment world(s)/universes.

This Saturday night, Brock Lesnar will fight Mark Hunt at UFC 200. Each alpha male wants to assert his badass dominance over the other to such a degree, that he strips that opponent of his alpha male status, emasculates him in the cage and reduces him to a human being who has to accept a defeat that was witnessed by friends, fans and family. This Saturday, Brock Lesnar enters that cage with a mindset I’ve never seen him display in any of his past UFC fights. He’s actually happy. Happy for the opportunity to perform on this platform. Happy for the chance to fight an opponent and not a disease. Happy to step into the spotlight and show the world that cage is not just the UFC-branded eight-sided fence, it’s the picture-perfect live-action set that should be renamed The Brocktagon!

Of course, we’re HustleTweeting about UFC 200, and you are more than welcome to join the conversation on the Hustle Twitter HERE and also our hyper-interactive Facebook page HERE!