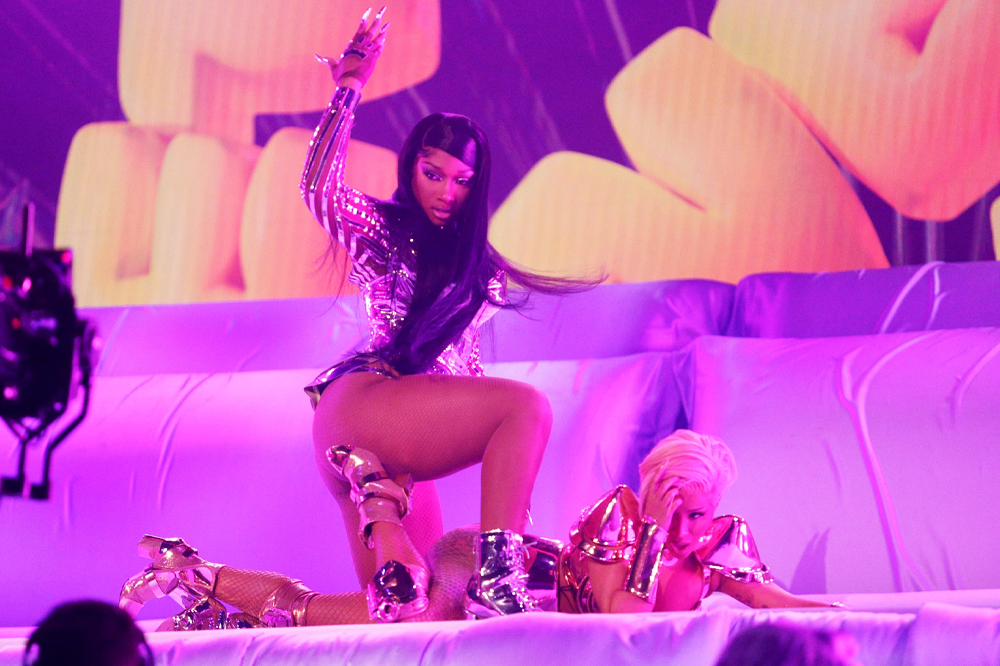 We know about headline.

But it’s not clickbait.

Cardi B and Megan Thee Stallion stole the show at the 2021 Grammy Awards.

Megan Thee Stallion and Cardi B have done it again.

During the 63rd annual Grammy Awards on Sunday, Cardi and Megan each delivered solo performances before they banded together for their ubiquitous hit “WAP.”

Megan, née Megan Pete, 26, first took the stage sporting a glamorous silver ensemble as she performed alongside a group of sparkling dancers.

The rap star opened her act with the fan-favorite track “Body” (which appears on her debut studio album, Good News), followed by “Savage.”

During Megan’s set — which featured a series of striking sequences — a duo of tap dancers appeared in glitzy leotards as they showed off their skills while moving down a brightly lit yellow staircase. As they approached the final steps, the dancers performed splits.

Moments after, Megan’s collaborator Cardi B, 28, hit the stage to perform her latest Bilboard chart-topper, “Up.” Cardi, née Belcalis Marlenis Almánzar, 28, wore a metallic pink skin-tight outfit which she topped with a stylish pink bob.

In true Cardi style, the hitmaker briefly showcased her exotic dance moves as she grabbed the heel of a giant stiletto shoe, which was designed to resemble a strip pole.

Likewise with “WAP,” she and Megan performed on an oversized bed, in an overt nod to the song’s sexuality.

Earlier in the night, Megan won the Grammy for best new artist. As she accepted her prize, she froze in shock before taking the stage where she thanked her late mom, who died in 2019.

Later during Sunday’s show, the remix of Megan’s fan-favorite “Savage” earned her and Beyoncé, 39, the Grammy for best rap song.

Not long after that win, Beyoncé won best R&B performance — breaking the record for the all-time Grammys by a female artist, overtaking Alison Krauss.

She also now has the most Grammy wins of any artist in American music history, male or female.

With the release of “Up,” Cardi became the first female rapper to debut in the top five of the Billboard Hot 100 chart since Lauryn Hill — who set the record with her smash jam “Doo Wop (That Thing)” in 1998.

We’re HustleTweeting about #WAP, and you’re more than welcome to join the conversation on the Hustle Twitter HERE … on our ridiculously sensational Instagram HERE … or on our Facebook page HERE!