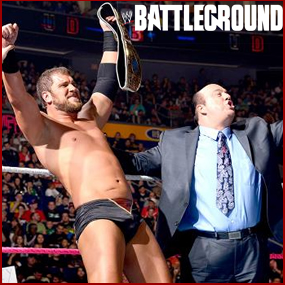 Our very own Hustler De Tuti Hustlers Paul Heyman leads his charge to victory at the very first WWE Battleground pay per view!

With the CM Punk vs Ryback match looming, the Intercontinental Champion (and Paul Heyman Guy) Curtis Axel stepped onto the Battleground to defend the title his father arguably made famous. R Truth was coming for the title, and Axel knew this would not be an easy defense. According to WWE.com:

In his first championship opportunity in nearly a year, the rapping Superstar — evidently motivated by Stephanie McMahon’s harsh critique of him on the Sept. 23 episode of Raw — came out with something to prove, aggressively taking it to the “Paul Heyman Guy.”

After hitting a series of numbing elbows and kicks, Truth dragged his opponent around the ring, pounding his skull into the turnbuckles. A powerful clothesline sent Axel over the top rope and another diving clothesline off the apron left the champion down at ringside. The energized challenger kept the pressure on with pin attempts, but Axel managed to stay alive.

Paul Heyman’s protégé regained momentum with a spine-rattling slam into the barricade before unleashing his vicious grappling game — and a beautiful dropkick — back in the ring. Undeterred, Truth fought back valiantly with a nifty roll-up and another near fall after nailing Axel with some of his trademark electrifying offense. The champion, however, simply refused to relinquish his title, taking advantage of a momentarily dazed Truth to hit his signature finishing maneuver for the hard-fought win.

With the key WWE Battleground victory, the up-and-coming “Paul Heyman Guy” avenges a non-title loss to Truth on the Sept. 30 episode of Raw and improves upon his already-impressive title reign, which now exceeds 110 days. Axel is slowly but surely gaining ground on his legendary father, WWE Hall of Famer Mr. Perfect, who held the Intercontinental Title for an incredible 400-plus days.

For R-Truth, meanwhile, it’s back to the drawing board after coming up short in a championship match once again. Could the WWE fan favorite use this disappointing loss as further motivation to earn another title opportunity? Or, could more critical, unsympathetic words from Stephanie McMahon be in his immediate future?

Of course, we’re HustleTweeting about WWE Battleground, and you’re more than welcome to join our conversation by following THE HEYMAN HUSTLE and telling us what YOU think RIGHT F’N HERE! We got the whole social media thing covered, so check out the Hustle’s Ultra High Quality You Tube Channel, with exclusive videos featuring OUR WORLD EXCLUSIVE WITH MIKE TYSON … BROCK LESNAR’S “HERE COMES THE PAIN” … ICE-T AND COCO’s SEX SECRETS … TEEN SENSATION TAYLOR MOMSEN … UFC BAD BOY NICK DIAZ … THE WALKING RIOT MISSY HYATT if you’re not subscribing, you’re missing something … and by the ways cheapos, it’s FREE! Yes, absolutely 100 percent FREE! What are you waiting for? Check it out HERE!

CLICK ON THE PICS BELOW TO SEE THE ENTIRE OFFICIAL WWE
PHOTO GALLERY FEATURING CURTIS AXEL VS R TRUTH FROM BATTLEGROUND!