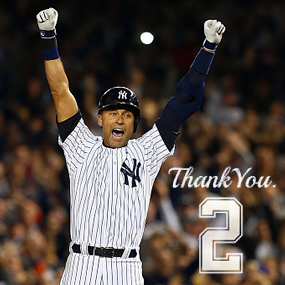 A storybook ending to The Captain’s final game in the Bronx! 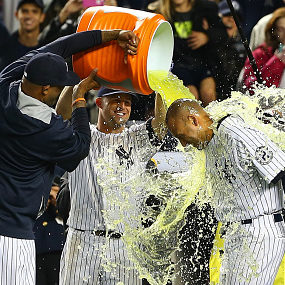 A storybook ending to The Captain’s final game in the Bronx!

It’s the stuff movies and fairy tales are made of. In a scene that The Associated Press has actually labeled “The Perfect Script” the final home game for New York Yankees Captain Derek Jeter came to an emotional conclusion when Jeter, in the bottom of the ninth, hit a game-winning single to give the Bronx Bombers a 6-5 victory over the Baltimore Orioles. with a game-winning single in the bottom of the ninth inning, the latest – and perhaps last – storybook moment in his charmed and illustrious career, to give New York a 6-5 victory Thursday night over the Baltimore Orioles.

Throughout the entire evening, the focus of the crowd was clearly on Jeter, who tipped his cap several times at shortstop and drove in three runs. He launched an early double off the left-center wall and saved the best for last, a sharp, opposite-field single to right that knocked in the winning run.

“It was above and beyond anything that I’ve ever dreamt of,” Jeter said.

Jeter went back out to shortstop, crouched down at the edge of the outfield grass and bounced on his toes a couple of times before re-joining the celebration that had assembled outside the Yankee dugout.

During the emotional outpouring, The Captain said he’s played his final game at shortstop, but he’ll likely play in some capacity this weekend in Boston.

In even more poetic justice, Jeter had already hit a tie-breaker earlier in the game.It looked like Jeter’s tie-breaking grounder in the seventh would be the swing that sent the Yankees to a victory when they built a 5-2 leaad against the defending Ameican League East champions.

But then David Robertson (4-5) gave up a two-run homer in the top of the ninth to Adam Jones and a tying shot to Steve Pearce with two outs.

Even the Associated Press gushed, “That only set the stage for Jeter one more time.”

Jose Pirela hit a leadoff single in the bottom of the ninth against Evan Meek (0-4) and advanced on Brett Gardner’s sacrifice. Jeter lined the next pitch through a huge hole on the right side, and pinch-runner Antoan Richardson slid home ahead of Nick Markakis’ throw.

Even more drama earlier in the day, as heavy rain was falling in New York City all afternoon, but the sky cleared in the evening and the tarp was removed from the infield an hour before the first pitch. Though many will say this was written into whatever movies are made about Jeter in the future, it’s true. A rainbow, in fact, actually appeared over Yankee Stadium.

Of course, we’re HustleTweeting about Derek Jeter, and you’re more than welcome to join the conversation by following us on twitter HERE or write to us directly at hustleoncrave@gmail.com Hey, have you checked out the Hustle’s Ultra High Quality You Tube Channel, with exclusive videos featuring OUR WORLD EXCLUSIVE WITH MIKE TYSON … BROCK LESNAR’S “HERE COMES THE PAIN” … ICE-T AND COCO’s SEX SECRETS … MMA BAD BOY NICK DIAZ … the list goes on and on, so if you’re not subscribing, you’re missing something … and by the ways cheapos, it’s FREE! Yes, absolutely 100 percent FREE! What are you waiting for? Check it out HERE!

CLICK ON THE PICS BELOW TO SEE THE ENTIRE GALLERY 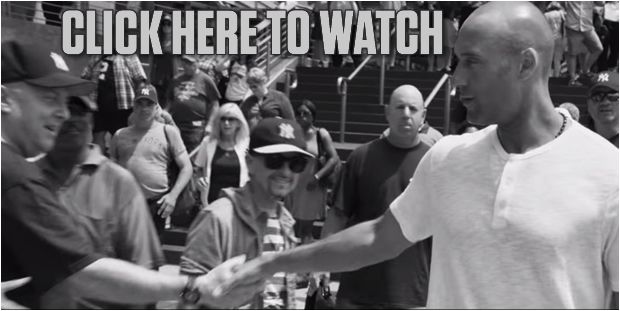