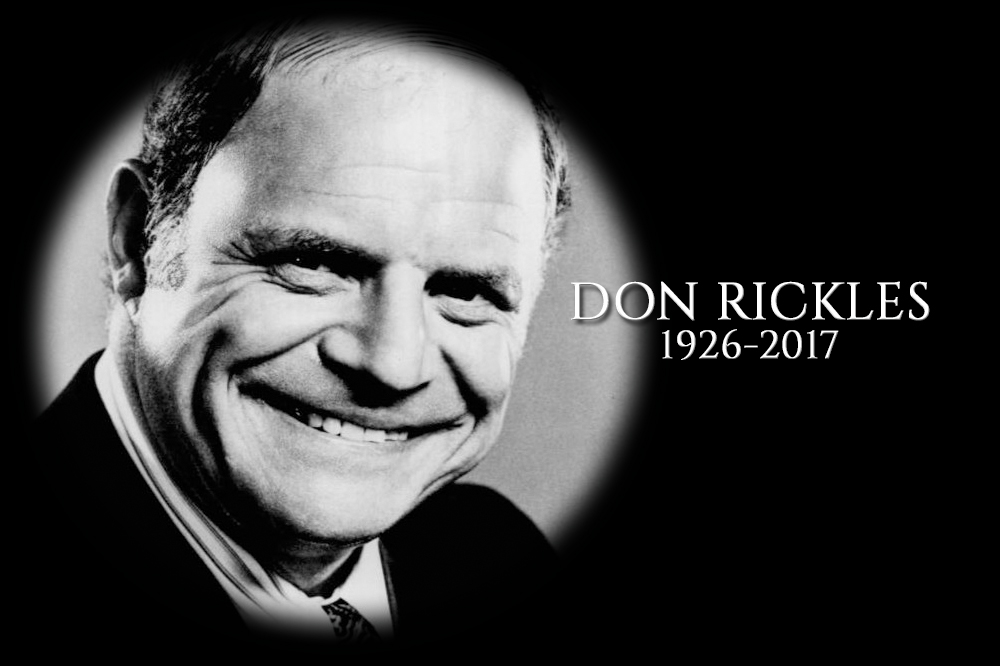 The last of the great Rat Pack era giants has passed away. Don Rickles died of kidney failure on Friday, and the world has lost a truly legendary comedian. His obituary has been posted in The New York Times, which reports:

Don Rickles, the acidic stand-up comic who became world-famous not by telling jokes but by insulting his audience, died on Thursday at his home in Los Angeles. He was 90.

The cause was kidney failure, said a spokesman, Paul Shefrin.

For more than half a century, on nightclub stages, in concert halls and on television, Mr. Rickles made outrageously derisive comments about people’s looks, their ethnicity, their spouses, their sexual orientation, their jobs or anything else he could think of. He didn’t discriminate: His incendiary unpleasantries were aimed at the biggest stars in show business (Frank Sinatra was a favorite target) and at ordinary paying customers.

His rise to national prominence in the late 1960s and early 1970s roughly coincided with the success of “All in the Family,” the groundbreaking situation comedy whose protagonist, Archie Bunker, was an outspoken bigot. Mr. Rickles’s humor was similarly transgressive. But he went further than Archie Bunker, and while Carroll O’Connor, who played Archie, was speaking words someone else had written — and was invariably the butt of the joke — Mr. Rickles, whose targets included his fellow Jews, never needed a script and was always in charge.

One night, on learning that some members of his audience were German, he said, “Forty million Jews in this country, and I got four Nazis sitting here in front waiting for the rally to start.” He said that America needed Italians “to keep the cops busy” and blacks “so we can have cotton in the drugstore,” and that “Asians are nice people, but they burn a lot of shirts.” He might ask a man in the audience, “Is that your wife?” and, when the man answered yes, respond: “Oh, well. Keep your chin up.”

As brutal as his remarks could be, they rarely left a mark. (“I’m not really a mean, vicious guy,” he told an interviewer in 2000.) Sidney Poitier was said to have once been offended by Mr. Rickles’s racial jokes. But in “Mr. Warmth: The Don Rickles Project,” a 2007 documentary directed by John Landis, Mr. Poitier sang Mr. Rickles’s praises.

Recalling the first time he saw Mr. Rickles perform, Mr. Poitier said: “He was explosive. He was impactful. He was funny. I mean, outrageously funny.”

Mr. Rickles got his first break, the story goes, when Sinatra and some of his friends came to see him perform in 1957 — in Hollywood, according to most sources, although Mr. Rickles said it was in Miami. “Make yourself at home, Frank,” Mr. Rickles said to Sinatra, whom he had never met. “Hit somebody.” Sinatra laughed so hard, he fell out of his seat.

Mr. Rickles was soon being championed by Sinatra, Dean Martin and the other members of the show business circle known as the Rat Pack. Steady work in Las Vegas followed. But he was hardly an overnight success: He spent a decade in the comedy trenches before he broke through to a national audience.

In 1965, he made the first of numerous appearances on “The Tonight Show,” treating Johnny Carson with his trademark disdain to the audience’s (and Carson’s) delight. He also became a regular on Dean Martin’s televised roasts, where no celebrity was safe from his onslaughts. (“What’s Bob Hope doing here? Is the war over?”)

Mr. Rickles’s wife, who he said “likes to lie in bed, signaling ships with her jewelry,” was not immune to his attacks. Neither was his mother, Etta, whom he referred to as “the Jewish Patton.” But off the stage, he didn’t hesitate to express his gratitude to his mother for unflaggingly believing in his talent, even when he himself wasn’t so sure.

“She had a tremendous drive,” he recalled in “Mr. Warmth.” “Drove me crazy. But she was like the driving force for me.”

He shared an apartment with his mother and did not marry until he was almost 40. After marrying Barbara Sklar in 1965, he saw to it that his mother had the apartment next door. His wife survives him, as do a daughter, Mindy Mann, and two grandchildren. Mr. Rickles’s son, Lawrence, died in 2011.

Donald Jay Rickles was born in the Jackson Heights neighborhood of Queens on May 8, 1926, to Max Rickles, an insurance salesman, and the former Etta Feldman. During World War II, he honed his comedic skills while serving in the Navy. (“On the ship that I went over to the Philippines,” he told The New York Times in 2015, “out of 300 men I was the class comedian.”) After being discharged, he followed his father into the insurance business, but when he had trouble getting his customers to sign on the dotted line, decided to try acting.

He studied at the American Academy of Dramatic Arts in New York, an experience that he later said gave him a greater sense of himself. But he found it difficult to get acting jobs and turned to stand-up comedy.

For a while, he pursued acting and comedy simultaneously. He did his stand-up act at Catskills resorts and in strip clubs, and his movie career got off to an auspicious start with a small part in the 1958 submarine drama “Run Silent, Run Deep,” starring Clark Gable and Burt Lancaster. But the bulk of his film work in the 1960s was in low-budget beach movies: “Bikini Beach,” “Muscle Beach Party” and “Pajama Party,” all in 1964, and “Beach Blanket Bingo” in 1965.

By that time, his comedy career had begun gathering momentum. Focusing less on prepared material and more on interaction with his audience, he had found his voice. He was not the first insult comedian — and in fact an earlier master of the comic insult, Jack E. Leonard, was known to complain that Mr. Rickles’s act was too similar to his — but he soon became far and away the most successful.

Bookings in the late 1950s at the Slate Brothers nightclub in Hollywood and the lounge of the Sahara Hotel in Las Vegas spread the word. During his Slate Brothers engagement, Carl Reiner recalled in “Mr. Warmth,” the biggest names in show business felt that “if they hadn’t been insulted by Rickles, they weren’t with it.”

His appearances insulting celebrities on the Dean Martin roasts and his sparring matches with Carson cemented Mr. Rickles’s reputation, but his unscripted brand of humor proved an uneasy fit for weekly television. A variety show in 1968 and a situation comedy in 1972, both called “The Don Rickles Show,” were short-lived, as was “Daddy Dearest,” a 1993 sitcom in which he and the comedian Richard Lewis played father and son. The closest thing to a hit show he had was “CPO Sharkey,” a Navy comedy, which aired from 1976 to 1978.

Critics were often not sure what to make of Mr. Rickles. John J. O’Connor of The Times wrote in 1972 that for some his humor “will always remain tasteless,” while for others “it has its delicious moments of madness.” Tom Shales of The Washington Post, 26 years later, was more enthusiastic, praising him as “mythic, timeless, fearless — endowed by the gods with some absurd miraculous gift.”

No critic, however thoughtful, could quite explain Mr. Rickles’s durability in show business, given that until the end of his career he was peppering his act with slurs and stereotypes long out of favor. And yet he not only got away with it, but he also flourished.

His own theory was that he was being rewarded for saying things others wanted to say but couldn’t. “I’m the guy at the Christmas party,” he said more than once, “who makes fun of the boss on Friday night and still has his job on Monday morning.”

Although Mr. Rickles sometimes expressed regret that he did not have more of a career as an actor, he did enjoy unexpected cinematic success late in life. In 1995, Martin Scorsese cast him in “Casino,” with Robert De Niro and Sharon Stone, and that same year he found a new audience as the voice of Mr. Potato Head in the hugely successful animated feature “Toy Story,” a role he reprised in its sequels. (“Toy Story 4” is scheduled for release in 2019, but it is not known whether Mr. Rickles had done any recording for it before his death.) In 2011, he was the voice of a frog in the movie “Zookeeper” and played the long-lost husband of Betty White’s character on the sitcom “Hot in Cleveland.”

In 2007, Mr. Rickles published a loosely structured memoir, “Rickles’ Book,” and was the subject of Mr. Landis’s documentary, shown on HBO, which was built around a performance at the Stardust Hotel-Casino in Las Vegas shortly before it was torn down.

In 2014, he was the subject of an all-star tribute (inevitably, it turned out to be more like a roast) broadcast on the Spike cable channel. That show included appearances by David Letterman, Jerry Seinfeld, Jon Stewart and Bob Newhart, whose soft-spoken style of comedy could not be further removed from Mr. Rickles’s, but who he often said was his closest friend in show business.

Health problems inevitably slowed Mr. Rickles down, but even after a leg infection in 2014 affected his ability to walk, he continued performing, making occasional concert and television appearances. In May 2015, he was one of the last guests on “Late Show With David Letterman.”

“The only way I would stop is if my health goes, God forbid, or the audience isn’t with me anymore,” he told The Times that year. “Besides, I got to keep going. My manager told me he has to put his kid through college. His kid is 10 years old.”

We’re HustleTweeting about Don Rickles, and you’re more than welcome to join the conversation on the Hustle Twitter HERE and also on our hyper-interactive Facebook page HERE!