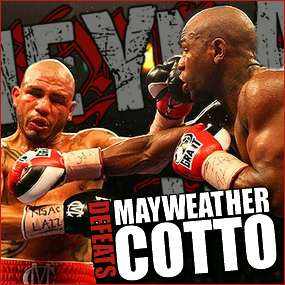 Money May Takes Some Punishment, But It’s Yet Another Example of Who is Boxing’s True Pound-For-Pound King!

Floyd Mayweather will sit in a jail cell this summer, the reigning defending Super Welterweight Champion of the World. Money May defeated Miguel Cotto at the MGM Grand Garden Arena in Las Vegas, but not before tasting his own blood.

It all started when Cotto landed a quick, direct left hand square on Mayweather’s nose in the fifth round. Blood trickled down his chin and dripped off his face, an announcement to the crowd that packed the MGM on Cinco De Mayo that Floyd Mayweather, the man they love to hate, was in for a fight!

The more Cotto landed right hooks to the body, the more he pinned Mayweather in corners, the more the crowd rose and screamed for him. Yet as Cotto continued his onslaught, Mayweather continued to shake his head. And smile. That damned pretty boy smile!

“Cotto is a future Hall of Famer,” Mayweather stated. “He’s no pushover. He’s a tough competitor, and he came to fight. I dug down and fought him back.”

Of course, we’re HustleTweeting about Floyd “Money” Mayweather, and you’re more than welcome to join the conversation by following the Hustle on Twitter HERE or write to us directly at hustleoncrave@gmail.com  Hey, have you checked out the Hustle’s Ultra High Quality You Tube Channel, with  exclusive videos featuring BROCK LESNAR’S “HERE COMES THE PAIN”  … ICE-T AND COCO’s SEX SECRETS … THE ULTIMATE WELTERWEIGHT BAD ASS NICK DIAZ … CONTROVERSIAL TEEN SENSATION TAYLOR MOMSEN … LEGENDARY MMA PIONEER FRANK SHAMROCK … THE WALKING RIOT MISSY HYATT … if you’re not subscribing, you’re missing something … and by the ways cheapos, it’s FREE! Yes, absolutely 100 percent FREE! What are you waiting for? Check it out HERE!