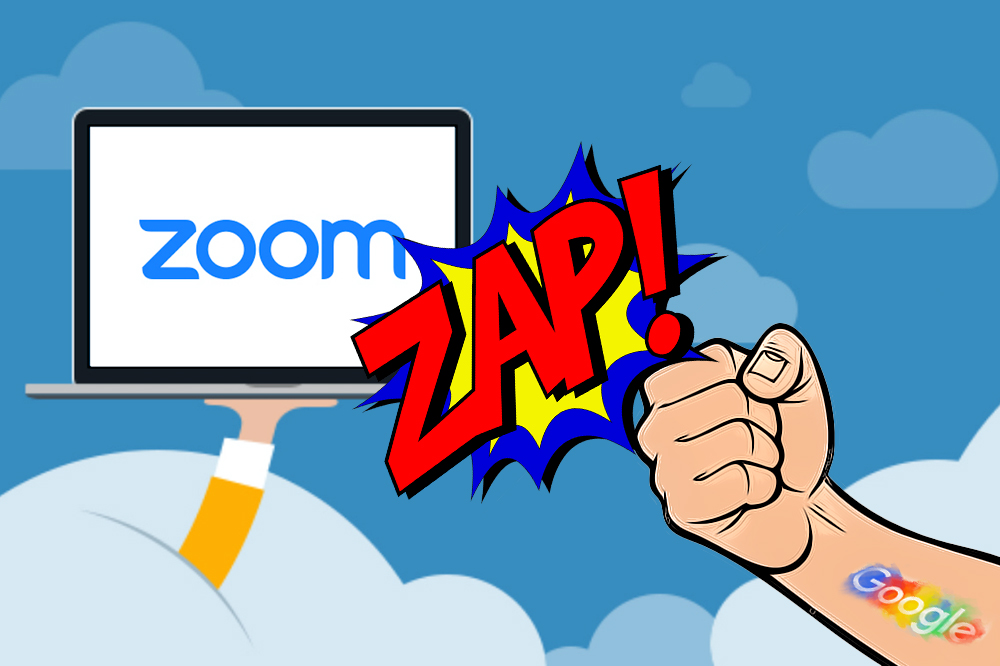 If you’re a Google employee, and you’re a reader of the Hustle (and let’s be honest with each other … if you work for a big time company like Google, you got something going on right in your life … why WOULDN’T you be a Hustle devotee?), keep yo ass offa Zoom … or else!

According to BuzzFeed News:

Google has banned the popular videoconferencing software Zoom from its employees’ devices, BuzzFeed News has learned. Zoom, a competitor to Google’s own Meet app, has seen an explosion of people using it to work and socialize from home and has become a cultural touchstone during the coronavirus pandemic.

Last week, Google sent an email to employees whose work laptops had the Zoom app installed that cited its “security vulnerabilities” and warned that the videoconferencing software on employee laptops would stop working starting this week.

“We have long had a policy of not allowing employees to use unapproved apps for work that are outside of our corporate network,” Jose Castaneda, a Google spokesperson, told BuzzFeed News. “Recently, our security team informed employees using Zoom Desktop Client that it will no longer run on corporate computers as it does not meet our security standards for apps used by our employees. Employees who have been using Zoom to stay in touch with family and friends can continue to do so through a web browser or via mobile.”

Headquartered in San Jose, California, Zoom went public in 2019, making its CEO Eric Yuan a billionaire. The company’s videoconferencing service was aimed at enterprises to run webinars and meetings but is now being used by locked-down people around the world for gym sessions, education classes, cocktail parties, and more. In March, 200 million people used Zoom daily compared to just 10 million in December.

But Zoom’s growth has been marred by concerns around the service’s security and privacy. Last month, an investigation by Motherboard showed that Zoom’s app for iPhone and iPads sent data about users’ devices to Facebook, including people who did not have Facebook accounts.

Zoom stopped sending the data to Facebook just a day later, but more problems surfaced soon after. A former NSA hacker discovered a Zoom security issue that could allow bad actors to control users’ microphones and webcams and gain control of Apple iMacs. The Intercept showed that Zoom calls weren’t actually encrypted the way that the company claimed. Last week, the company said that some video calls were “mistakenly” routed through servers in China when they shouldn’t have been. The offices of 27 attorneys general have also raised questions about the company.

“[We] recognize that we have fallen short of the community’s – and our own – privacy and security expectations,” Yuan wrote on a blog post earlier this month. “For that, I am deeply sorry.”

We’re HustleTweeting about Google and Zoom and you’re more than welcome to join the conversation on the Hustle Twitter HERE and also on our hyper-interactive Facebook page HERE!