How The Late Peter Cushing Gave a Stellar Performance in Star Wars: Rogue One, Years After His Death 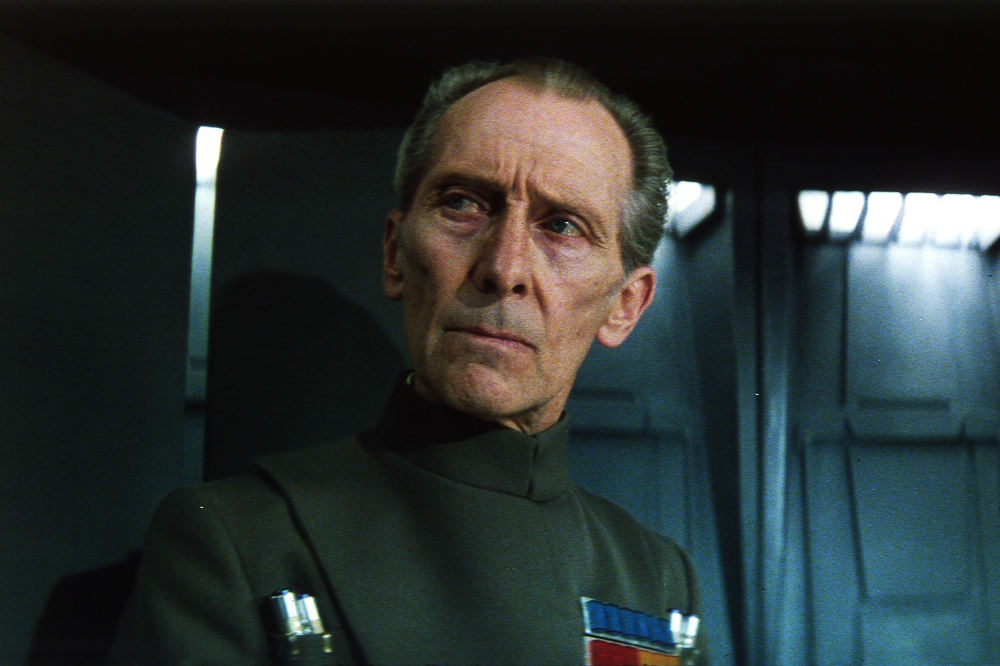 WARNING: ROGUE ONE SPOILERS IN THIS STORY!

In what may be the template for upcoming storyline twists involving Carrie Fisher‘s character in the Star Wars saga, the makers of Rogue One have controversially figured out a way to get a performance out of Peter Cushing … years after the actor has passed away! Taking their cue from using holograms live in concert, the makers of Star Wars have gone even further in their pursuit of presenting characters, whether the actor is alive to play the role or not. We are entering into a new realm, folks. And the legalities are complex.

Vulture presented an extended case lesson regarding the use of Peter Cushing‘s likeness in the new Star Wars release:

There are few, if any, ongoing film franchises more connected to the passage of time than Star Wars. It’s there in the dates of each release: 1977 to 1983 for the original trilogy; 1999 to 2005 for the prequels; and now, starting in 2015, one movie a year through at least 2020, including this year’s Rogue One. That’s more than 40 real-life years for the franchise to span onscreen, and 40 years of filmmaking means 40 years of human events, including the most human events of all: aging and death.

The problem is particularly acute for Rogue One, which takes place shortly before 1977’s A New Hope and features a few of the same characters. In one instance, the movie addresses this problem in a more or less unprecedented way. Rather than recast the role of baddie Grand Moff Tarkin, once played by the late Peter Cushing, director Gareth Edwards and Industrial Light and Magic simply digitally re-created the actor.

They did this through a combination of techniques: British actor Guy Henry, probably best known to American audiences as Minister of Magic Pius Thicknesse in both Harry Potter and the Deathly Hallows movies, performed the role of Tarkin during shooting, then was digitally altered in post-production to appear as if he was Cushing. According to the Daily Mail, which first reported that Cushing would be re-created back in 2015, the effect was achieved by drawing on preexisting footage of the actor, particularly his work in A New Hope. (Apparently, his legs and feet were difficult, because Cushing hated the boots he was given for Tarkin’s costume and gave his original performance in slippers; as a result, Lucas only shot him from the knees up.)

That’s the technical How of Cushing’s return. The legal How is a bit less straightforward. As CGI has improved over time, concerns have grown regarding actors’ rights to their own personas and likenesses, either onscreen or in video games. Netflix’s BoJack Horseman featured a story line in its third season in which BoJack is replaced in a film by a digital re-creation of himself, having signed away those rights in his contract; he’s subsequently nominated for an Oscar, and the performance is praised as the best of his career. Meanwhile, digital plastic surgery and post-production enhancement have become not only commonplace but expected, going so far, at least in one instance, as replacing an actor’s face with another’s after the performance was already in the can.

But Cushing in Rogue One represents a more extreme version of the case: This is a deceased actor being made to look as though he’s giving a new, living performance. Is it ethical? Good question. Is it legal? Probably.

“It’s very likely that [the filmmakers] secured permission from Cushing’s estate or his direct heirs, because the laws regarding postmortem rights of publicity differ from state to state,” Tyler Ochoa, a professor at the Santa Clara University School of Law, told Vulture. “Two states expressly do not recognize a postmortem right of publicity, including New York, but among the states that do recognize, the period can range anywhere from ten years after the actors death, to 50 to 70 years, to 100. In one state, Tennessee, it’s even perpetual, thanks to a statute the Elvis estate got passed.”

In California, that right of publicity — the legal term for the the right to prevent others from profiting off your image without your consent — lasts 70 years after an actor’s death, and the state could choose to enforce that even if Cushing resided in a state or country with a shorter postmortem right of publicity, or, as in the case of Cushing’s United Kingdom, none at all. Because of this situation, permission is almost always obtained before such a use of likeness is attempted, which is why there’s been very little litigation on the issue so far. An actor’s contract also usually defines the extent and nature of his or her rights as far as whether the copyright holder of their performance can use their likeness in a sequel, or a video game, or an advertisement; according to Ochoa, the rights of publicity tend to be cumulative, meaning an actor would need to give permission for further use of footage in addition to permission from the copyright holder. (A moot point for Rogue One, as Lucasfilm held the copyright to Cushing’s old performance.)

There is a gray area: Copyright is federal law, while rights of publicity are state law, and federal law is supreme to state. Theoretically, a challenge could be made to an actor’s rights of publicity by a copyright holder, or over a person who could be said to exist in the public domain, as has been happening with Marilyn Monroe. “But smart lawyers are going to handle this with contracts,” Ochoa said. “They’re going to continue to get permission wherever they can, and if they can’t get permission, they’ll avoid it.”

Considering the stakes involved in a film the size of Rogue One, it’s almost certain that Disney did their due diligence in making sure that the use of Cushing’s likeness was legal; when reached for comment, a Disney representative pointed to two mentions of Cushing in the credits: “With Special Acknowledgment to Peter Cushing, OBE” and “Special Thanks to The Estate of Peter Cushing, OBE.” Actors’ union SAG-AFTRA, meanwhile, issued this comment: “Using a digital or virtual re-creation of a performer, deceased or living, in a film, television show, video game, or any other audio-visual work, requires, at minimum, prior consent of the performer or the performers’ beneficiaries. The issue for us is straightforward and clear: The use of performers’ work in this manner has obvious economic value and should be treated accordingly.” Either way, it’s safe to assume that this is only the first instance of what could become a major trend in filmmaking. Plumbing the past has proven a powerful tool for studios selling blockbusters: If franchises can be revived, why not actors, too?

We’re HustleTweeting about Star Wars, and you’re more than welcome to join the conversation by following the Hustle on Twitter HERE or by hitting LIKE on our hyper-interactive Facebook page HERE!