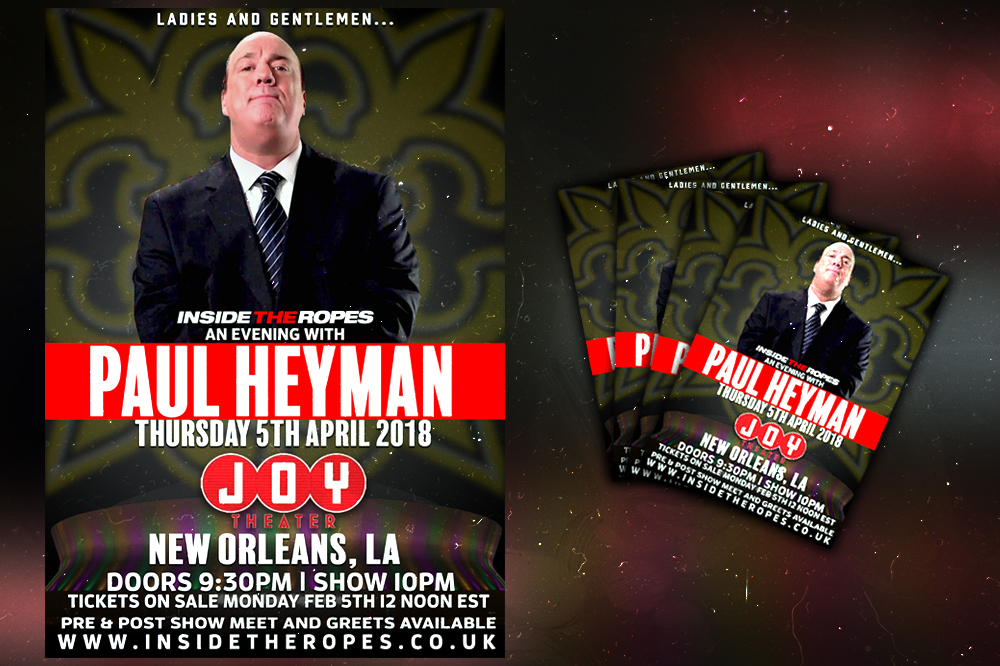 Inside The Ropes is coming to America, and they’re debuting in the biggest way possible, an intimate discussion with The Advocate, our boss Paul Heyman, during WrestleMania week! According to the press statement:

In a Once in a Lifetime event, just days before WrestleMania 34, Inside The Ropes will present our first ever US live show when we present The Advocate of Extreme: An Evening with Paul Heyman. Just one mile from the scene of the end of The Streak, the evil genius will open up about his career in ECW, his first run in WWE, the WWE reincarnations of WCW & ECW and his most recent run as the advocate for WWE Universal Champion Brock Lesnar. Paul Heyman NEVER does these kind of events but for one night only you can not only watch Paul talk wrestling but you can also participate in an exclusive meet n greet where you can get a photo and an autograph from one of the key figures heading into the weekends main event in the Mercedes Benz Superdome. Don’t miss it!

CLICK HERE TO PURCHASE YOUR TICKETS TO THE SHOW!

We’re HustleTweeting about Paul Heyman in New Orleans, and you’re more than welcome to join the conversation by following the Hustle on Twitter HERE or by hitting LIKE on our hyper-interactive Facebook page HERE!

LADIES & GENTLEMEN…….The Good times will roll as INSIDE THE ROPES kick off WrestleMania weekend in NEW ORLEANS w/The Advocate @HeymanHustle in this ONE NIGHT ONLY event! The evil genius will have a live mic PLUS there'll be RARE Pre Show Meet n Greet tickets! Roll on Apr 5th! pic.twitter.com/HKSCT0cEu3