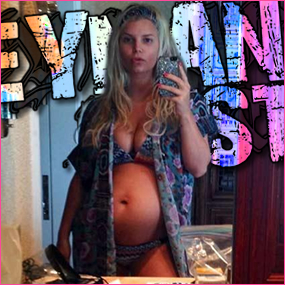 The Superstar Blonde Bombshell Is About To Add Baby Number To Her Collection!

Ah, Twitter. The new way to hold a press conference.

Jessica Simpson took to the social media network to confirm rumors that she is pregnant with baby number two, as the 32 year old tweeted “Bumpin’ and Proud!” on her Twitter page over the weekend.

The tweet included a photo of a bikini-clad Jessica standing in front of a mirror with her pregnant belly (and boobalicious cleavage) bustin’ out for all to see (and, we might add, admire)!

In case you’re wondering what will happen to Jessica’s four million dollar endorsement deal with Weight Watchers, that’s a funny question. The day Jessica told the world she was with child again, Weight Watchers debuted a commercial with Simpson showing off how she shed 50 pounds. And, it gets even wilder. Jessica is also the cover girl for the January/February issue of Weight Watchers magazine, but the company says it could not be happier for its celebrity spokeswoman.

“Congrats to @JessicaSimpson, Eric and big-sister-to-be Maxwell!” the company tweeted. “Your WW family is so thrilled for you. what an amazing year you’ve had!”

Her lawyers must have negotiated a damn good pregnancy clause.

CLICK HERE TO SEE THE UNCENSORED PHOTO OF JESSICA SIMPSON AND HER SEXY BABY BUMP PHOTO THAT SENT THE TWITTERVERSE INTO ANOTHER STRATOSPHERE!

Of course, we’re HustleTweeting about Jessica Simpson and her baby bump, and you’re more than welcome to join the conversation by join the conversation by following us on twitter HERE or write us directly at hustleoncrave@gmail.com  Hey, have you checked out the Hustle’s Ultra High Quality You Tube Channel, with exclusive videos featuring OUR WORLD EXCLUSIVE WITH MIKE TYSON … BROCK LESNAR’S “HERE COMES THE PAIN” … ICE-T AND COCO’s SEX SECRETS … TEEN SENSATION TAYLOR MOMSEN … UFC BAD BOY NICK DIAZ … THE WALKING RIOT MISSY HYATT if you’re not subscribing, you’re missing something … and by the ways cheapos, it’s FREE! Yes, absolutely 100 percent FREE! What are you waiting for? Check it out HERE!