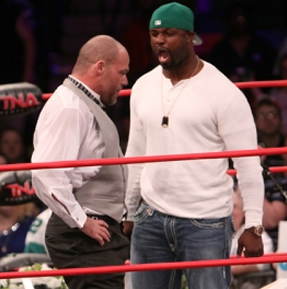 Photographer George Tahinos Captures The Moment as SpikeTV’s Olympic Gold Medalist Traps The NFL All Star in The Ankle Lock!

TNA Wrestling got a nice dose of national publicity with the appearance of New York Jets linebacker Bart Scott on the program. The lifelong wrestling fan agreed to participate on last Thursday’s eventful (and event-filled) broadcast as part of the “wedding vow” ceremony between Jeff and Karen Angle.

Scott was sent to the ring by the Jarretts and Eric Bischoff, but was out of his element when squaring off with Kurt Angle. The incident got major play, including an article in USA TODAY,which questioned whether Scott has violated NFL regulations with his appearance on the wrestling program.

According to the story, Pro Football Talk’s Mike Florio has raised the issue by stating The NFL Standard Player Contract contains clear restrictions on the ability of players to engage in potentially hazardous activities. Specifically, paragraph 3 provides: “Without prior written consent of the Club, Player will not play football or engage in activities related to football otherwise than for Club or engage in any activity other than football which may involve a significant risk of personal injury …

We’d love to know, so let your voice by heard by joining the conversation! Follow the Hustle on Twitter HERE or write to us at hustleoncrave@gmail.com