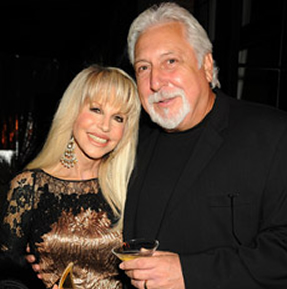 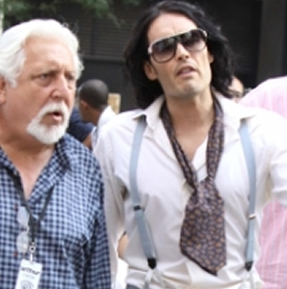 "Arthur" Executive Producer Michael Tadross Is The Most Powerful Movie Producer In The Big Apple!

You can always tell when our own Hustler De Tuti Hustlers Paul Heyman admires someone. Paul’s eyes light up, and he speaks about the person with such passion, you start to feel an ache in your soul because you want to meet that person so much.

With THE HEYMAN HUSTLE‘s showbiz reporter Hollywood Charlie REPORTING LIVE FROM THE SET OF THE RUSSELL BRAND -STARRING REMAKE OF "ARTHUR" we were about to post some great new exclusive photos of Russell walking on the streets of Manhattan with the movie’s Executive Producer when Paul jumped up and down and screamed "we got pictures of Michael Tadross!"

Michael Tadross, who recently married Fox News Celebrity Psychologist and best selling author Dr. Georgia Witkin (that’s the happy couple in our lead pic) is the Executive Producer of a number of films, including The Devil’s Advocate, Die Hard 3, Hitch, I Am Legend, and now Arthur.

In 2001, he was EP on a John McTiernan film called ROLLERBALL

That’s where he met our boss Paul Heyman.

"Mikey has some really big shoes to fill," Paul stated, "The King has worked his ass off, and now he owns New York! But Mikey is no slouch. He’s been putting together a string of projects, and he plans on making his own mark in the business. Watch out for him in Vegas. Mikey Tadross is going to plant his Family Crest firmly in the dessert sand and make the Tadross Monarchy a bi coastal empire sooner than anyone thinks!"

CLICK ON THE PICS BELOW TO SEE THE ENTIRE GALLERY OF RUSSELL
BRAND AND "THE KING OF NEW YORK" MICHAEL TADROSS!