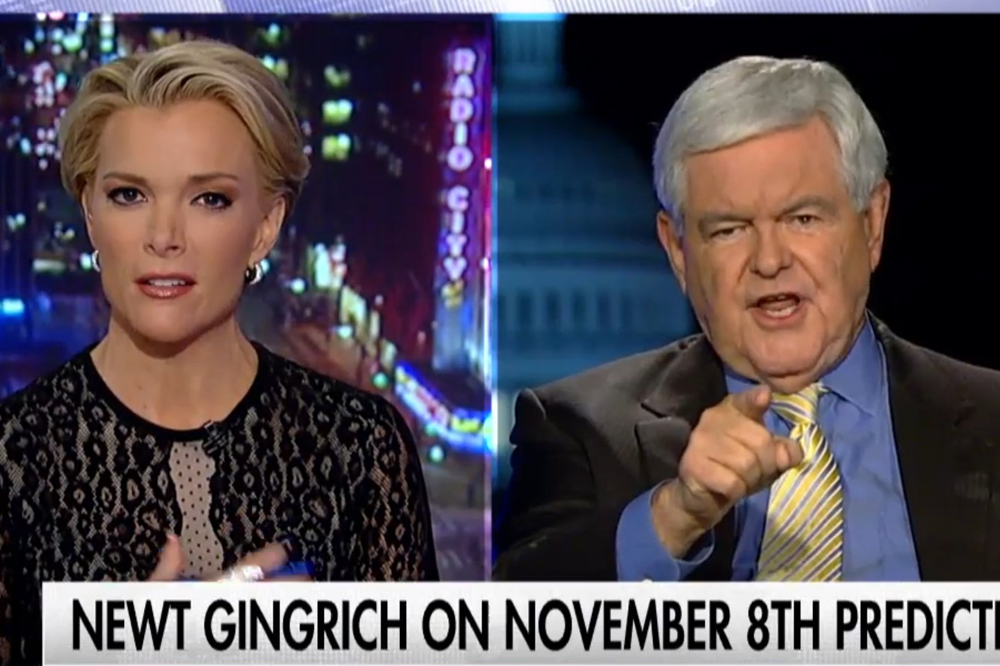 Even in this, a very Jerry Springer-esque 2016 Presidential Election, an argument between former speaker of the House Newt Gingrich and Fox News anchor Megyn Kelly may end up being one of the more memorable exchanges of the entire wild ride we’ve experienced since Donald Trump up-ended American politics by announcing a bid for the presidency. Gingrich accused Kelly of being “fascinated with sex” for her reporting on allegations of unwanted advances and groping by the Republican presidential nominee, Donald Trump.

Gingrich pressed Kelly, claiming the news media spends a disproportionate amount of attention to allegations by 10 women that Trump had allegedly forcibly kissed or groped them. Gingrich questioned why a speech Hillary Clinton had given in Brazil to a bank that had paid her $225,000 was not also worthy of coverage.

That was the start of a roughly two-minute exchange on live television that was shocking even for this election cycle.

“You are fascinated with sex and you don’t care about public policy,”Gingrich lashed out.

Gingrich: “That’s what I get out of watching you tonight.”

Kelly: “You know what Mr. Speaker, I’m not fascinated by sex, but I am fascinated by the protection of women and understanding what we’re getting in the Oval Office and I think the American voters would like to know …”

Gingrich then began to talk about how Hillary Clinton’s husband, former President Bill Clinton, would return to the White House “because you, after all, are worried about sexual predators!”

“Listen!” Kelly shot back. “It’s not about me. It’s about the women and men of America!”

Kelly said “excuse me” four times as he talked over her. She noted how her news program had covered the allegations of sexual abuse by former President Clinton.

“He’s not on the ticket,” responded Kelly, referring to former President Clinton. “The polls also show the American public is less interested in the deeds of Hillary Clinton’s husband than they are in the deeds of the man who asks us to make him president, Donald Trump.”

With the remaining time allotted winding down, she continued: “We’re going to have to leave it at that and you can take your anger issues and spend some time working on them, Mr. Speaker. Thanks for being here.”

We’re HustleTweeting about Megyn Kelly vs Newt Gingrich, and you’re more than welcome to join the conversation by following the Hustle on Twitter HERE or by hitting LIKE on our hyper-interactive Facebook page HERE!