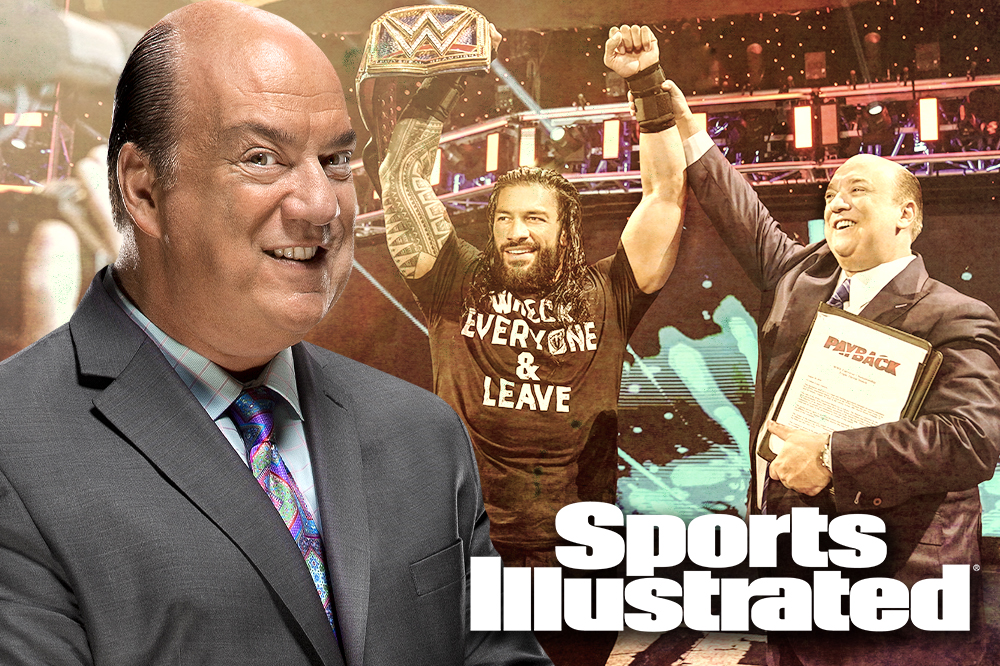 In a fascinating interview with Justin Barrasso of Sports Illustrated, our boss Paul Heyman discussed his role as Special Counsel for The Tribal Chief, WWE Universal Heavyweight Champion Roman Reigns. According to Sports Illustrated:

A featured part of Friday’s SmackDown will be a “Samoan Street Fight” pitting Roman Reigns and Jey Uso against King Corbin and Sheamus.

If that sounds familiar, it is a rematch from last week. But the wrinkle this Friday is that Reigns, after not showing up until the end of last week’s match, will be the first man in the ring.

And if you don’t believe that, Reigns’s advocate, and one of the most brilliant minds in the history of the wrestling business, Paul Heyman, has given it his signature guarantee.

“Don’t be fooled thinking that this is a prediction, it’s a spoiler,” Heyman says. “There was a bit of a misunderstanding the way everything went down last week on SmackDown, but there won’t be that misunderstanding this week. Roman Reigns will enter first and declare his turf in the center of that ring.”

For the past 35 years, whether it was earmarking talent for stardom, hiding their weaknesses while simultaneously enhancing their strengths, or developing and refining his own on-screen presence, Heyman laid the foundation of his career by working with a variety of performers, spanning from Steve Austin to CM Punk.

But that career trajectory changed course 18 years ago, when fate—or was it Vince McMahon?—introduced Heyman to a freakishly athletic wrestler from Webster, S.D., a rural outpost not too far from the fabled Parts Unknown.

Though their WWE partnership first began in 2002, the past eight years have forever intertwined Heyman and Brock Lesnar. The true star-making moment of Lesnar’s ending the Undertaker’s WrestleMania streak belonged to Heyman. Lesnar’s repeated absence from WWE programming allowed Heyman to form a new relationship with the audience. That run, in its entirety, has resonated so powerfully that it is easy to forget that Heyman has worn practically every hat in the pro wrestling industry.

Before Lesnar, the goal was not simply reinventing himself. Heyman was always chasing the undeniable lure of the next big attraction, an opportunity to create something new.

Once again, history is repeating itself for Heyman. He has found the lake of rejuvenation, which he was led to by a chiseled athletic specimen who was also a star college athlete. But the man in question was not a product of the University of Minnesota, but rather former Georgia Tech football star Roman Reigns in a partnership that has spurred a compelling plot.

“It’s an opportunity 33 years into my performing career to completely redefine, reimagine and reinvent myself,” Heyman says. “I’m now the special counsel to the tribal chief, a role I’ve never played.

Just as with Lesnar, Heyman has a long history with Reigns, although Heyman has an altogether different rapport with Lesnar than he does with Reigns, the product of their time together on the road, fighting through failure and shared triumphs in a business where friends are few and confidants are even rarer.

“With Brock Lesnar, I began by advocating for the next big thing, an NCAA Division I champion,” Heyman says. “We were tied together at the hip on his way to the top. That’s not what this is. Roman Reigns has been established as the top act for eight years, and I was the one thrown out into the ocean of obscurity. Roman Reigns rescued me.

“We’re not navigating his trajectory to the top. Our entire focus is keeping him fresh, relevant and reinvigorated, and making that presentation seamless. That is exhilarating, even for someone who had a career in wrestling that dates back to being a photographer as a kid in Vince McMahon Sr.’s Madison Square Garden locker room.”

Heyman fielded the next question without hesitation, noting that, yes, Lesnar is well aware that Reigns now stands in the spot that he long occupied.

Lesnar and Heyman have built an extremely lucrative partnership over nearly two decades, but Reigns and Heyman share a more personal history.

The Reigns–Heyman alliance extends far deeper than a partnership on SmackDown. There is footage of Heyman consoling Reigns in the Gorilla position on Raw in 2018 after Reigns announced that he had leukemia. That was more than a colleague wishing the best to his coworker: It was raw emotion after being hit with life-or-death news regarding a man whom he had known since he was a child.

Heyman is notorious on screen for keeping his composure, no matter what a live crowd or an opponent may verbally hurl in his direction, but he is also a man with intense passion and conviction behind the curtain. Heyman has known Reigns’s family since he was 15, sharing car rides with Afa and Sika Anoa’I as a teenage photographer to Allentown and Hamburg, Penn.

“With all humility aside, this is the biggest move WWE could make with its talent at the moment,” Heyman says. “We have the tenured, still-young, just-hitting-his-prime WrestleMania main-eventer, the undisputed No. 1 star in WWE, and he’d been off for seven months. Didn’t even appear at this year’s WrestleMania. Now he’s ready to come back, and he returns with someone that has been on top and been associated with top acts for 30 years. However you define me, whether it’s as a manager, an advocate, a supporting mouthpiece, and now special counsel to the tribal chief, I have been with more WWE and universal champions than anyone. And now these two acts are together for the first time.”

The role with Reigns has given Heyman new life as an on-screen performer after McMahon opted to remove Heyman from his position as executive director of Raw and replace him with Bruce Prichard. Now, instead of generating ideas for talent to succeed and then carefully pitching those ideas to McMahon, which are two altogether different tasks, Heyman has narrowed his lens to focus solely on Reigns. And that is fortuitous for the rest of the roster, Heyman notes, because Reigns’s star is so bright that it reflects onto those around him savvy enough to see such golden opportunity.

“Roman Reigns coming back to WWE gives everyone on the roster an opportunity to redefine themselves,” Heyman says, who has creative input into Reigns’s story lines. “They now inhabit what I refer to as ‘The Island of Relevancy.’ Roman Reigns is the headliner, which instantly makes everyone relevant. He is the single biggest superstar of the past decade and remains that today. Everyone gets a chance to redefine themselves in the orbit of the tribal chief, the centerpiece of WWE.”

This Friday on SmackDown, nine days before Reigns will meet Jey Uso in the main event of Clash of Champions for the universal championship, the two team up in a street fight. The story is predicated on the idea that “you’ll never see it coming,” which was the tagline at SummerSlam that foreshadowed the return of Reigns, his alliance with Heyman, regaining the title he never lost and, most recently, encountering a new No. 1 contender in his cousin Uso.

“That was only the first two weeks,” Heyman says. “We plan on topping that every week. And the reason we will is because of Roman Reigns. He has been at the very top of WWE since he debuted in 2012, yet is even more ambitious today than I’ve ever known him to be. Everything he has accomplished up to now has served as a buildup to the true Hall of Fame portion of his career.

“Roman takes the responsibility of being the top star in WWE very seriously, and he is going to do this Friday what he’s done for his entire career. He’s going to overdeliver on SmackDown, and when the show is over, people will be talking about it. And you can believe that.”

We’re HustleTweeting about our boss Paul Heyman, Roman Reigns and the Samoan Street Fight that main events WWE Friday Night Smackdown on FOX tomorrow night … and you’re more than welcome to join the conversation on the Hustle Twitter HERE … on our ridiculously sensational Instagram HERE … or on our Facebook page HERE!