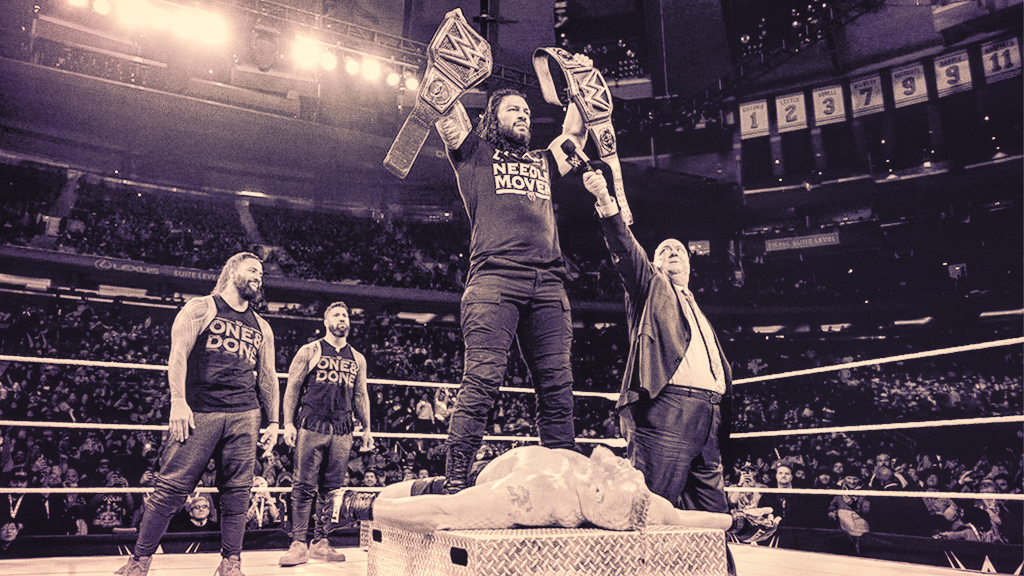 A great night for the #Bloodline.

And a bad night, ultimately, for WWE Champion Brock Lesnar.

Lesnar came out to the ring to defend his title at the end of the show, only to have Heyman re-appear in the entrance way, calling the Garden “the Holy Cathedral of the #TribalChief Roman Reigns!”

From there, Austin Theory took over, and challenged Lesnar for the title.

After taking Theory to #SuplexCity and hitting him with an F5, Lesnar scored the pinfall, only to be Superman Punched by Reigns. The attack was on. Lesnar fought back, but The Usos hit the ring. When Lesnar was manhandling the entire #Bloodline, Heyman snuck in from behind with a chair. But Lesnar turned around. Heyman was trapped, and dropped the chair. As Lesnar went to get his hands on Heyman, Reigns got the chair, and smashed Lesnar with hit, busting open Lesnar’s face in the process.

The show ended with Reigns standing over Lesnar, holding both titles in the air, demanding that Lesnar ACKNOWLEDGE him.

A preview, perhaps even a spoiler for WrestleMania?

We’re HustleTweeting about this historic moment in Madison Square Garden, and you’re more than welcome to join the conversation on the Hustle Twitter HERE … on our ridiculously sensational Instagram HERE … or on our Facebook page HERE!