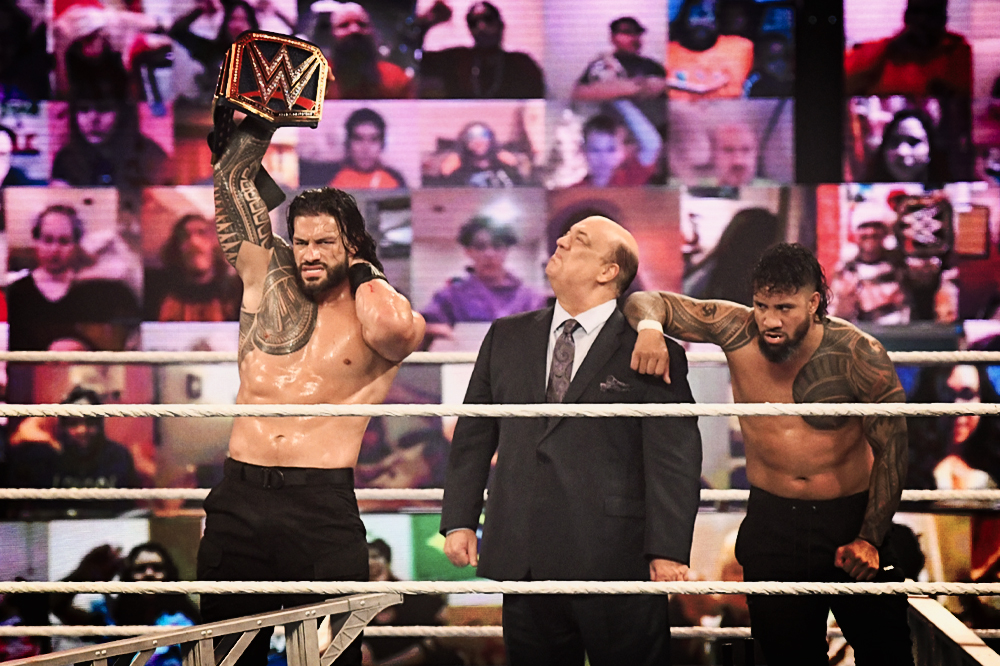 In what may go down in history as the hardest fought battle in WWE Tables Ladders and Chairs history, Universal Heavyweight Champion Roman Reigns (accompanied by our boss, his #SpecialCounsel Paul Heyman) defeated “KO” Kevin Owens to successfully defend his championship. A huge assist, though, goes to Roman’s cousin Jey Uso.

Whether by hook or by crook, Roman Reigns is still The Head of the Table after defeating Kevin Owens in a Tables, Ladders & Chairs Match at WWE TLC to retain the Universal Championship.

Owens’ loss came through no strategic shortcoming nor a lack of will, as he gave Reigns a dose of his own medicine by ambushing The Big Dog during his entrance. Blasting the champion with a cannonball against the barricade and a frog splash from the apron, Owens left Reigns in perhaps his most vulnerable state since returning to WWE this past summer.

KO was more than ready for Jey Uso to insert himself into the equation, too. He met Uso with a superkick as soon as he darted into the ring, and Owens didn’t stop there, wedging Jey’s left foot in a steel chair and stomping on it.

Essentially finding himself in a Handicap Match, Owens planted Reigns with a Stunner before seeking to eliminate Jey, slamming him through the announce table with a Pop-up Powerbomb. From there, Owens came within fingertips of grabbing the Universal Title until Reigns fought him off the ladder and drove him through another with a big-time powerbomb.

Far from satisfied, Reigns poured it on further, smashing Owens through a table with a Samoan drop. But Owens somehow summoned the power to crawl into the ring and stop Reigns’ ascent toward the title.

Seemingly disgusted with Owens’ refusal to quit, Reigns told him he was embarrassing his family, only to be met with a defiant slap before Reigns drove KO through a table with a huge Spear.

The Big Dog looked for another Spear on the outside, but it was evaded by Owens, leaving Reigns to destroy the barricade instead.

Uso was once again a thorn in Owens’ side, stopping his ensuing climb up the ladder two more times. KO seemingly put Jey away for good with a Stunner, only to be caught with a low blow by Reigns after scaling the ladder.

Passing Owens out with the Guillotine, Reigns finally had the space he needed to retrieve the Universal Championship, reaffirming his status as The Head of the Table.

We’re HustleTweeting about WWE TLC, and you’re more than welcome to join the conversation on the Hustle Twitter HERE … on our ridiculously sensational Instagram HERE … or on our Facebook page HERE!