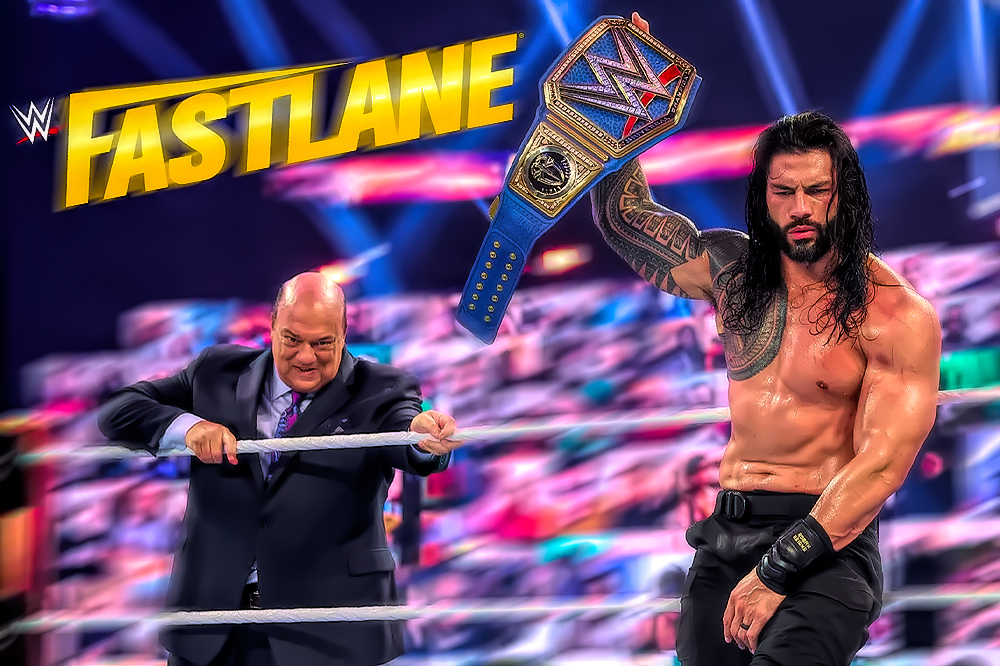 WWE Universal Heavyweight Champion Roman Reigns successfully defended his title against Daniel Bryan in the main event of Fastlane, but not before Special Ringside Enforcer Edge and Reigns’ cousin Main Evemt Jey Uso got involved. Our boss, Reigns’ #SpecialCounsel Paul Heyman had the best seat in the house (although he never sits). Here’s what happened, courtesy of WWE.com:

Roman Reigns is still the Universal Champion, but it’s clear his challenger in three weeks at WrestleMania will stop at nothing to dethrone him.

Reigns retained the title against Daniel Bryan in a chaotic melee that saw Edge, the Special Outside Enforcer, make his presence felt in a major way.

Bryan deployed mental warfare from the outside, repeatedly connecting with quick strikes that were almost more annoying to Reigns than they were damaging. But Reigns eventually turned the battle into a slugfest, fed up with The “Yes!” Man provoking him, and the matchup turned nasty in a hurry as Reigns controlled the pace.

With the action moving outside the ring, Bryan fought back by sending Reigns face-first into the post. Bryan’s surge seemed to only anger the champion, but Bryan kept bringing the fight, eventually applying the “Yes!” Lock. Reigns was reeling with nowhere to go until eventually powering out and slamming Bryan with a huge powerbomb.

All hell broke loose moments later as Bryan’s Running Knee inadvertently took out the official instead of The Head of the Table.

Reigns answered with a huge Spear, and with the referee incapacitated, Edge put his authority to use, counting a near-fall. Reigns seemed to question The Rated-R Superstar’s cadence, and Bryan took advantage of Reigns’ lack of focus to lock on a Triangle hold.

But out of nowhere, Jey Uso emerged to blast Edge with a superkick before hitting Bryan with one as well, bailing out Reigns. Bryan neutralized Uso with a knee when Uso attempted to use a chair. The “Yes!” Man then errantly struck Edge with a chair strike meant for Reigns.

The challenger recovered to apply the “Yes!” Lock yet again, only for Edge to bash him with the chair just as a barely conscious Reigns appeared to be tapping out.

Incensed, The Rated-R Superstar beat both before exiting, and Reigns had just enough energy to slide over Bryan for a hellacious win.

We’re HustleTweeting about WWE Fastlane, and you’re more than welcome to join the conversation on the Hustle Twitter HERE … on our ridiculously sensational Instagram HERE … or on our Facebook page HERE!