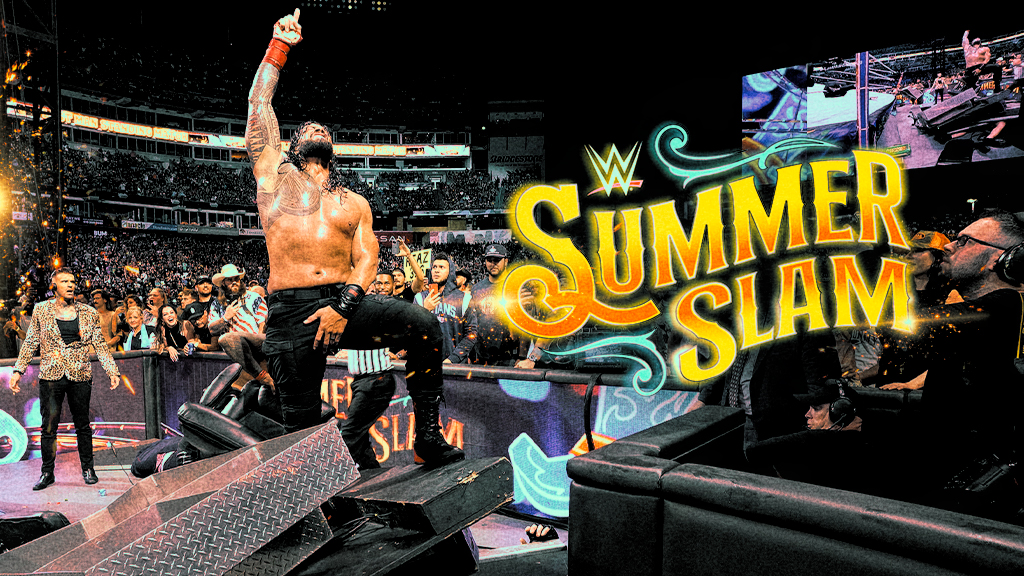 It may be remembered as the greatest WWE SummerSlam match of all time. Certainly the wildest. Definitely amongst the most memorable. And a new bar has been set for Last Man Standing!

In a match billed as “One last time. One last match,” Roman Reigns and Brock Lesnar wrote a brutal and epic final chapter to their historic rivalry.

Lesnar smiled as he drove to the ring in a tractor, standing atop the front-end loader to look down on Reigns as he announced himself as “the man who will kick Roman Reigns’ a**.”

The Beast wasted little time diving off the tractor to plant Reigns with a Lou Thesz Press to kick off the match. Despite being in his first-ever Last Man Standing Match, The Beast Incarnate looked right at home amongst the carnage, suplexing Reigns onto the arena floor and launching him into the steel steps before tossing Reigns over the ring barricade and suplexing The Head of the Table throughout the crowd.

As Lesnar set up a table, Paul Heyman snuck up to distract his former client long enough for Reigns to rally and deliver a Samoan drop to Lesnar through the table for an eight-count. Reigns smashed Lesnar through a second table, but it couldn’t keep Lesnar down as Reigns followed up with a pair of Superman Punches and a Spear. On wobbly legs, Lesnar was able to counter another Spear. Unable to keep Reigns up for an F-5, Lesnar instead drove him through the remnants of a table.

While Reigns beat the 10-count, Lesnar maneuvered his tractor for more space before clobbering Reigns with the steel steps and the other half of a table. The Beast carried a weary Reigns over to the tractor and dumped him in the front loader, lifting him up and dropping him back into the ring for a six-count. After a flurry of German Suplexes, The Beast hoisted Reigns up for an F-5, nearly earning the victory as Reigns barely made it to his feet at the count of nine.

Furious, Lesnar climbed back into his tractor and lifted the entire ring off the floor as Reigns rolled out the other end!

With the ring propped up on one side, Lesnar looked to drive Reigns through the announce table when The Usos bum-rushed The Beast. Lesnar quickly dispatched the WWE Undisputed Tag Team Champions, but Heyman stepped in to protect his Tribal Chief. Heyman tried to reason with Lesnar, but Lesnar picked up Heyman and F-5’ed him through the announce table before turning around into a Spear by Reigns.

With bodies lying everywhere, Theory ran in with his briefcase, smashing Reigns across the face. Before he could cash in, however, Lesnar dropped him with an F-5 and turned around into a pair of Superkicks from The Usos. To Reigns’ shock, Lesnar beat the 10-count following a Spear, so The Head of the Table grabbed Theory’s Money in the Bank briefcase and pummeled The Beast.

Lesnar still refused to stay down, so after a second straight strike to the face with a title, Reigns and The Usos buried Lesnar underneath the rubble. Reigns then stood atop the wreckage as the referee counted to 10 to keep the Undisputed WWE Universal Championship in The Bloodline.