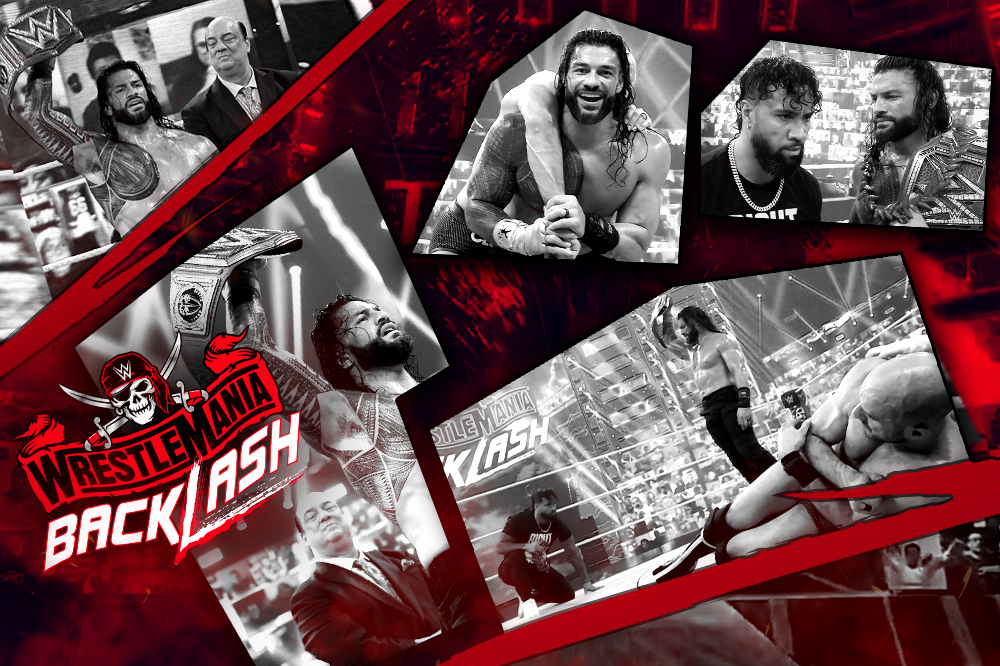 WWE Universal Heavyweight Champion Roman Reigns successfully defended his title against the awesome challenge of Cesaro tonight at the WWE WrestleMania Backlash pay per view event, live from the Thunderdome in Tampa, Florida.

Even after a courageous effort by Cesaro, Universal Champion Roman Reigns still sits at The Head of the Table. Meanwhile, The Swiss Superman’s night ended on the lowest of notes thanks to Seth Rollins.

But early, it became clear that Reigns had underestimated Cesaro, as an early flurry put The Head of the Table on his heels.

Special Counsel Paul Heyman shrewdly reminded Reigns to dictate the pace, and he did exactly that, appearing to injure Cesaro’s right arm. The Big Dog continued to brutalize the arm and further injure it, quickly putting the challenger in desperate territory and leaving him unable to deliver some of his signature offense.

As dominant as Reigns was, though, he grew frustrated as he was unable to put away the durable challenger.

A mistimed Superman Punch attempt by Reigns cleared the way for Cesaro to hit a devastating pop-up uppercut — a comeback catalyst. He kept his foot on the gas, dialing up a spectacular corkscrew plancha to the outside, and back inside, came within an eyelash of his first World Title with a near-fall following a top-rope crossbody.

The champion took the air out of Cesaro’s sails and quickly got his swagger back, battering Cesaro with strikes to the point that he appeared to be out on his feet.

The Swiss Superman’s apparent injury proved most costly when it caused Cesaro to fail a Neutralizer attempt, and Reigns took advantage by countering Cesaro’s springboard attempt with a massive Superman Punch.

Cesaro escaped Reigns’ initial attempt at the guillotine but later found himself trapped in the hold. He seemingly used his last remaining strength to slam The Head of the Table, and Reigns still refused to relinquish the hold, putting Cesaro out for the referee stoppage.

Jey Uso — whose help Reigns eschewed prior to the match after taking issue with him — came to the ring seemingly to repent, presenting The Tribal Chief with a ceremonial lei and blasting Cesaro with a superkick.

The nightmare ending to Cesaro’s fairytale only worsened, as Seth Rollins delivered a ruthless beatdown, sickeningly wedging Cesaro’s arm in a steel chair before slamming it against the ring post.

The SmackDown Savior added an exclamation point with a vicious Stomp, leaving the man who defeated him at WrestleMania in pieces.

We’re HustleTweeting about WWE WrestleMania Backlash, and you’re more than welcome to join the conversation on the Hustle Twitter HERE … on our ridiculously sensational Instagram HERE … or on our Facebook page HERE!