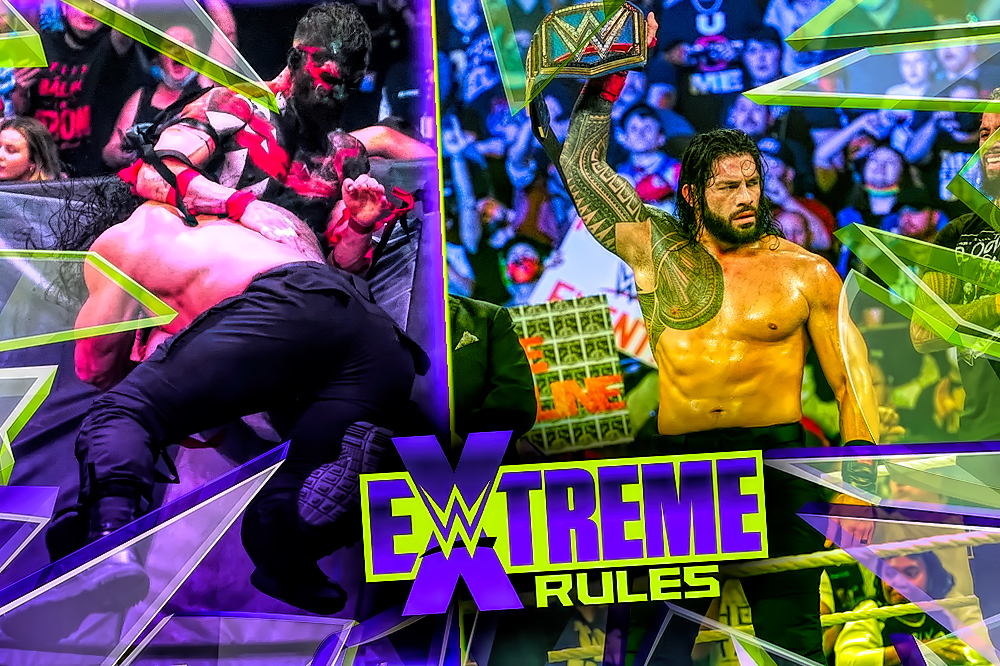 WWE Universal Heavyweight Champion Roman Reigns (along with our boss, his #SpecialCounsel Paul Heyman) handed The Demon his first defeat in the main event of WWE Extreme Rules, which took place live from Columbus, Ohio. According to WWE.com:

“The Demon” Finn Bálor had been unbeatable up to this point, and he looked to be just that at WWE Extreme Rules. But a malfunction of the top rope led Roman Reigns to victory over Bálor’s unsettling alter ego in a grueling Extreme Rules Match, and The Head of the Table retained his Universal Championship.

At first, Reigns did not know how to deal with his seemingly unstoppable opponent. When Reigns pulled out a Kendo stick, The Demon pulled out a bundle of sticks bound together, which he used to pummel the champion.

But when The Demon went to pull a table out from under the ring, Reigns found an opening, hitting Bálor with a Drive-By, sending him crashing into the ring post. From there, the bout spilled into the WWE Universe in Columbus, where The Demon drove Reigns through a table with a crossbody.

As the bout made its way back into the ring, The Head of The Table took control, giving Bálor a taste of his own medicine by smashing him through a table, then clobbering him with a Superman Punch. With Paul Heyman hyping him up from ringside, Reigns declared that the WWE Universe would acknowledge him “all day, every day” as he set up for a Spear. Bálor stopped the first, but he took the full brunt of the second.

The Demon kicked out at the last second, hitting Reigns with a low blow in the process. That gave Bálor the opening to connect with the Coup de Grace. But before Bálor could pin the champion, Jimmy and Jey Uso yanked him out of the ring and battered him at ringside. Bálor fought back, taking out both Usos, only to find himself in the path of Reigns’ Spear, driving him through the ringside barricade.

But just as things looked bleakest for Bálor, The Demon’s heartbeat echoed through the arena, bringing him back to life. Bálor sprung to his feet, grabbing a chair and hammering Roman with it before sending him crashing through a table at ringside with a shotgun dropkick.

Bálor rolled Reigns back into the ring and scaled the ropes for the Coup de Grace. But just as The Demon was about to spring into the air, the buckles holding the top rope in place snapped and gave out from under Bálor, sending him hurtling to the mat. Bálor clutched his knee, grimacing in pain as he got back to his feet. The challenger turned around into another Spear that gave Reigns the three-count.

Reigns faced his toughest challenge to date, and though he nearly lost his title, fate helped him hang onto it. Now, The Head of The Table has a monstrous challenge awaiting him in the form of Brock Lesnar.

We’re HustleTweeting about WWE Extreme Rules, and you’re more than welcome to join the conversation on the Hustle Twitter HERE … on our ridiculously sensational Instagram HERE … or on our Facebook page HERE!