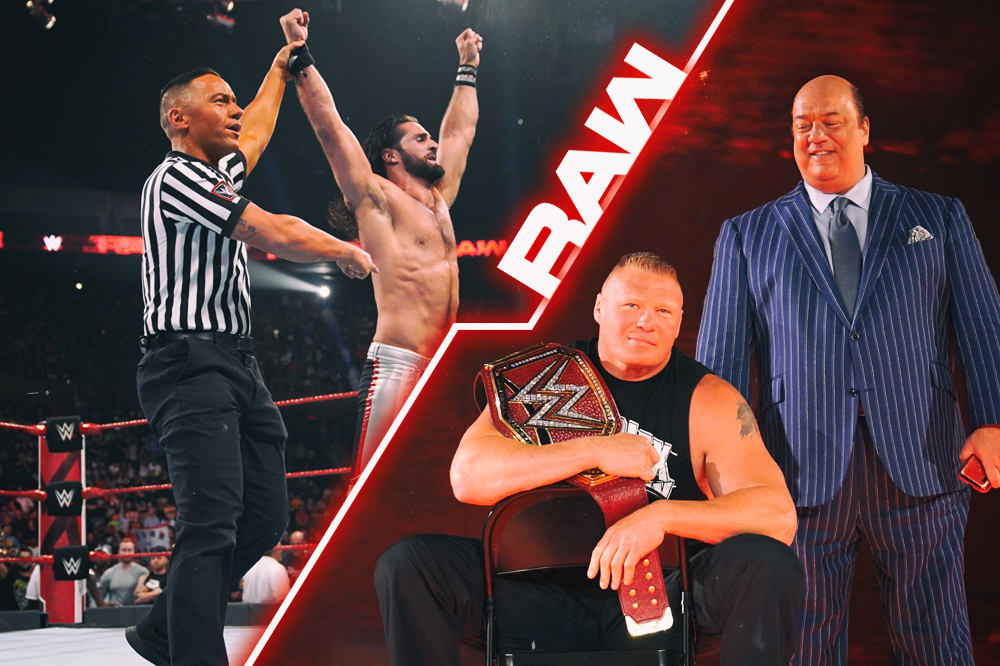 Seth Rollins won a Cross-Branded Ten Man All Star Battle Royal on Monday Night RAW to become Brock Lesnar‘s challenger for the Universal Title at WWE SummerSlam, which takes place August 11th in Toronto. Lesnar cashed in the Money in the Bank contract against Rollins and regained the Universal Title at Extreme Rules. This was told to us all in advance, as Paul Heyman offered a history-making spoiler in Philadelphia! Earlier tonight, Heyman announced the Cross-Branded Ten Man All Star Battle Royal, and now Lesnar must once again contend with Rollins.

Say this for Seth Rollins: He doesn’t stay down for long. In a lightning-quick rebound from his Extreme Rules loss — and in an odd mirror to the Royal Rumble Match win that netted him a Universal Title bout at WrestleMania — The Architect triumphed in a Cross-Branded All-Star Top 10 Battle Royal featuring 10 Superstars from Raw and SmackDown LIVE, setting himself up for another Universal Title bout against Brock Lesnar at SummerSlam.

That’s not to say he didn’t have competition: Cesaro ran through the field with the Uppercut Express; Randy Orton dished out RKOs to anything that moved, Big E hoisted Braun Strowman up for a Big Ending before Sami Zayn scored an upset elimination of the SmackDown Tag Team Champion, and Baron Corbin was ousted by Rollins, Strowman and Roman Reigns after unceremoniously tossing Rey Mysterio.

Rollins suffered an errant Spear by Reigns in the final stretch of the match, but he recovered quickly enough to eliminate The Big Dog and Strowman, who were in a deadlock on the apron. Orton, however, had been biding his time after being sent through the ropes, and he immediately struck from behind, narrowly eliminating the unsuspecing Rollins. The Architect recovered again, administering a Stomp to The Apex Predator and tossing him over the ropes to win the match and send himself to SummerSlam, where Lesnar lies in wait.

Paul Heyman was quick to attempt to get in Rollins’ head from his and Lesnar’s perch atop the stage, sneeringly announcing The Kingslayer as both the winner of the match and the sacrificial lamb for The Beast Incarnate. Rollins countered with some fiery words of his own and a promise that he would repeat his WrestleMania triumph come SummerSlam. Given that Lesnar briefly stalked to the ring with a chair in hand, it’s fair to say he’s taking Rollins seriously this time around. And if Seth Rollins recaptures the title, Brock Lesnar won’t be able to say he wasn’t warned.

We’re HustleTweeting about WWE SummerSlam, and you’re welcome to join the conversation on the Hustle Twitter HERE and also on our hyper-interactive Facebook page HERE!