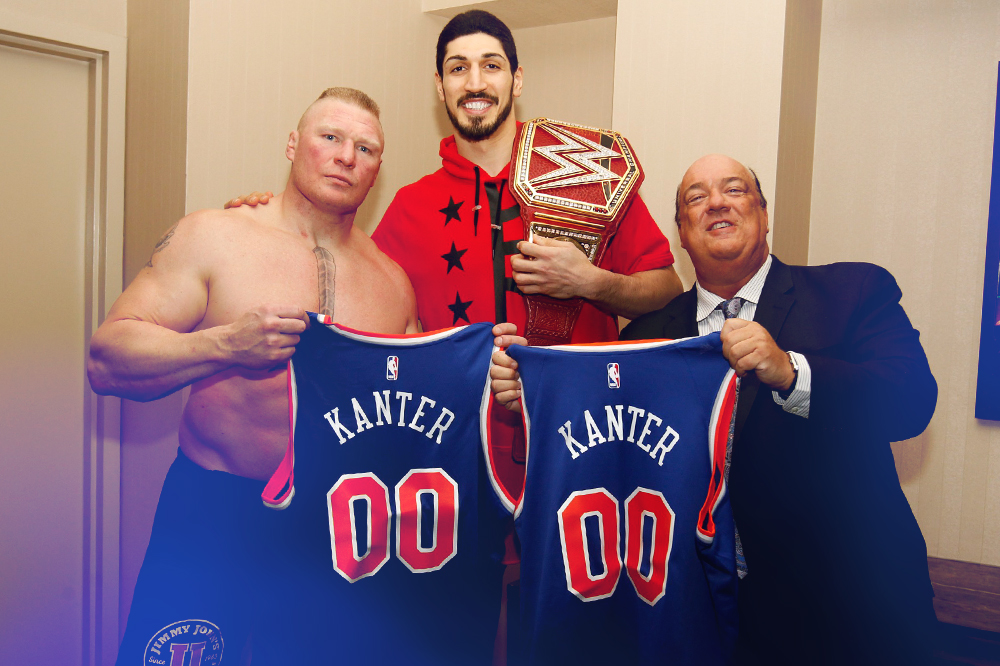 Our boss Paul Heyman has advocated the New York Knicks’ star center Enes Kanter‘s emergence as a sports celebrity in New York, as evidenced by Paul’s tweet below ….

. @Enes_Kanter has everything it takes to be #NewYork's biggest sports superstar. He racks up amazing numbers, has become the @NYKnicks team leader, even better in the clutch, loved at @TheGarden, great sense of humor, fearlessly opinionated and a total bad ass. A #PaulHeymanGuy pic.twitter.com/dJWWyBqGvU

It was a blast introducing my client, the reigning defending undisputed @WWE Universal Champion @BrockLesnar to my son's favorite basketball player @Enes_Kanter of the @nyknicks tonight at @TheGarden! pic.twitter.com/Mm5GhEaiwX

Enes Kanter = The Next #PaulHeymanGuy?

My next chapter 💯 💪 @WWE pic.twitter.com/aXopaVt2kg

I can just see it now …. THE TURKISH DELIGHT @Enes_Kanter in a #PaulHeymanGuy t-shirt as the reigning defending undisputed @WWE #BasketBRAWL Champion, tapping out (or knocking out) #LeBronJames at @WrestleMania! https://t.co/Wvkyvpcfna

We’re HustleTweeting about Enes Kanter, and you’re more than welcome to join the conversation on the Hustle Twitter HERE and also on our hyper-interactive Facebook page HERE!