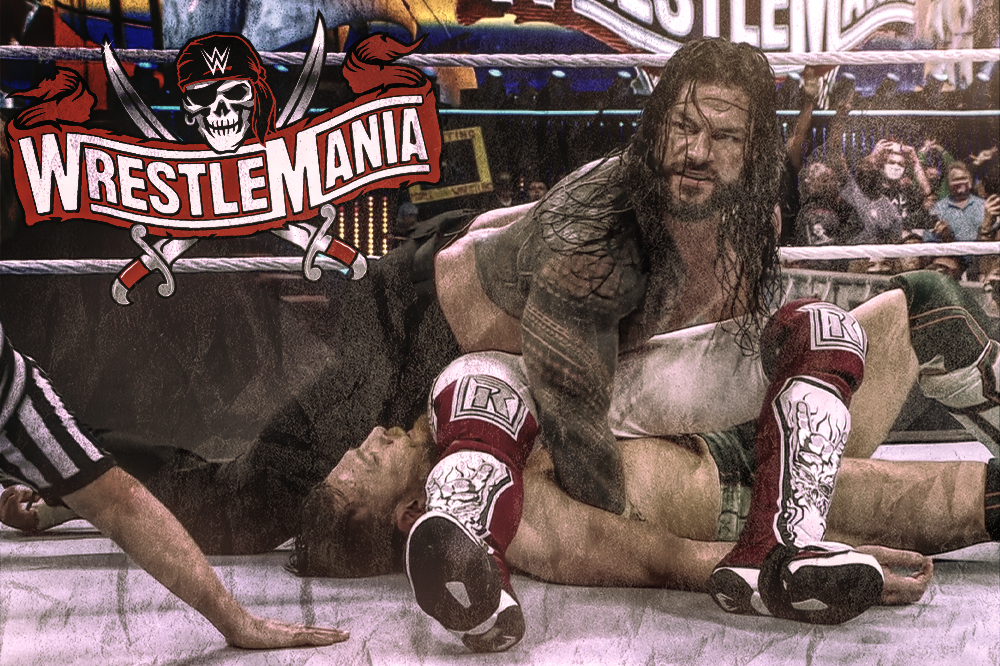 WWE Universal Heavyweight Champion Roman Reigns (along with our boss, his #SpecialCounsel) Paul Heyman asserted such dominance in the main event of WrestleMania, there is no other ‘Mania championship or main event performance we can compare it to. Just to put it into perspective: Reigns defended the Universal Heavyweight Championship against multi-time former world champion Edge and multi-time former world champion Daniel Bryan in a Triple Threat Match. At the conclusion of the match, Reigns stacked one on top of the other, and pinned them both. Special credit for the assist does go to Reigns’ cousin Jey Uso, but even if an entire Samoan war tribe assisted, the stacked pin in an image that will live forever in WrestleMania history.

The Head of the Table was hell-bent on leaving no leftovers for the competition in the biggest match of the year, as Universal Champion Roman Reigns shattered the storybook dreams of Edge and Daniel Bryan at WrestleMania 37.

The match that was not even thought possible a few short years ago electrified the WWE Universe with a frenetic pace from the opening bell.

Jey Uso took advantage of the No Disqualification setting, getting involved early on his cousin’s behalf by blasting both challengers with superkicks. Edge, however, removed Uso from the equation with a thunderous DDT on the steel steps, and the ringside area already resembled a car crash a few short minutes into the bout.

The chaos continued, as Reigns and Edge countered each other’s Spear attempts before second simultaneous tries, resulting in a destructive mid-air collision that left both men down.

Bryan, who knew from experience what would be required for victory after doing the impossible under similar circumstances at WrestleMania 30, wisely picked the bones, delivering flying headbutts and “Yes!” kicks to both opponents and taking over the match until Edge broke up his “Yes!” Lock on the champion.

The Big Dog began enforcing his will, seemingly eliminating Bryan from contention by driving him through a table with a devastating powerbomb from atop the steps and standing defiantly before a WWE Universe full of his detractors.

Reigns’ moment of dominance was short-lived, though, as The Rated-R Superstar floored him with a spectacular Spear off the steps.

Back in the ring, Edge applied a crossface to Reigns, only to be joined miraculously by Bryan, who applied a “Yes!” Lock in stereo.

The Ultimate Opportunist later dodged Bryan’s Running Knee, unleashing on a Spear on him before evading Reigns’ Superman Punch before Spearing Reigns as well.

Covering the champion, Edge appeared poised to recapture gold 10 years to the day after he was forced to retire and relinquish the World Championship — only for Bryan to pull the referee out of the ring just before the count of three.

Incensed by having his WrestleMania moment plucked away, Edge uncorked sadistic chair strikes on Bryan and Reigns before going off the reservation completely with a sickening Con-Chair-To on Bryan.

Uso made his presence felt once more, but he soon ate a Spear and chair blasts from Edge as well.

But with Reigns having time to recover, The Head of the Table hit one final, emphatic Spear on Edge before cracking The Rated-R Superstar with a Con-Chair-To of his own.

Not fit with merely winning, Reigns dragged Edge atop Bryan to pin both Superstars and ensure that his rule over SmackDown was unassailable.

We’re HustleTweeting about WWE WrestleMania, and you’re more than welcome to join the conversation on the Hustle Twitter HERE … on our ridiculously sensational Instagram HERE … or on our Facebook page HERE!