The Angry Grandpa Passes Away 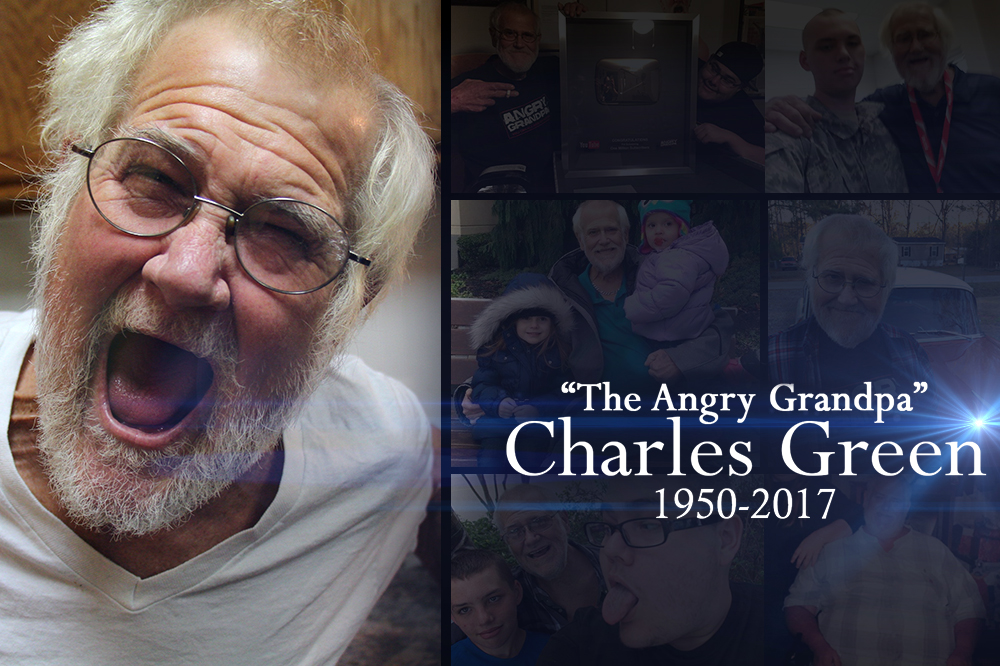 It is with heavy hearts that we at The Heyman Hustle announce the passing of a true YouTube pioneer. Charles Green, born October 16, 1950 and better known around the world as “The Angry Grandpa” passed away after battling several health issues over the past few months. The Pissed Off Patriarch became a viral sensation after debuting “The Angry Grandpa Show” right here on the Hustle.

Angry Grandpa‘s youngest son, “Pickleboy” is better known to long time readers of the Hustle as Michael 24/7, and was the Hustle’s original web designer and developer. Shortly after launching “The Angry Grandpa Show” the series became a worldwide phenomenon, as clips of Angry Grandpa losing his cool and tearing things apart started to be featured and fiercely debated on HLN’s Dr. Drew … TruTV’s Most Shocking … Rude Tube … and MTV’s Pranked.

“The Angry Grandpa Show” moved to YouTube, where the channel dedicated to Grandpa‘s antics and interaction with Pickleboy aka Kid Behind a Camera aka Michael 24/7 and Michael’s girlfriend Bridgette West amassed over 3 million subscribers and was well on its way to a billion views. This spawned the launched of Michael’s own Kid Behind a Camera channel, with 1.9 million subscribers and Grandpa’s Corner, which was an almost out-of-character personal channel where Grandpa would stories about his life along with a special weekly segment called “Mailbag Monday” where he would open packages and read letters sent in by viewers, whom he lovingly referred to as his “youngin’s.”

TWEET KID BEHIND A CAMERA ABOUT THE ANGRY GRANDPA!

Behind the character of The Angry Grandpa, Charles Green was an amazing man. He dedicated his life to his family and his community, a former firefighter who found an outlet for his rage on the web series designed to be a parody of the manner in which he dealt with frustration. It was on that web series that he found happiness, as he not only discovered a lot about himself, but became an internationally recognized sensation with fan mail pouring in from all over the world. He was, perhaps, never more at ease and more honest than when he was in front of the camera. He was a natural, and he exposed himself as a truly caring soul in that he felt in his heart he had adopted every viewer as a “youngin’.”

We here at The Heyman Hustle offer our most profound condolences to the friends, fans and family of Charles “Angry Grandpa” Green, and invite you to join the celebration of his life by joining the conversation on the Hustle Twitter HERE and also on our hyper-interactive Facebook page HERE!